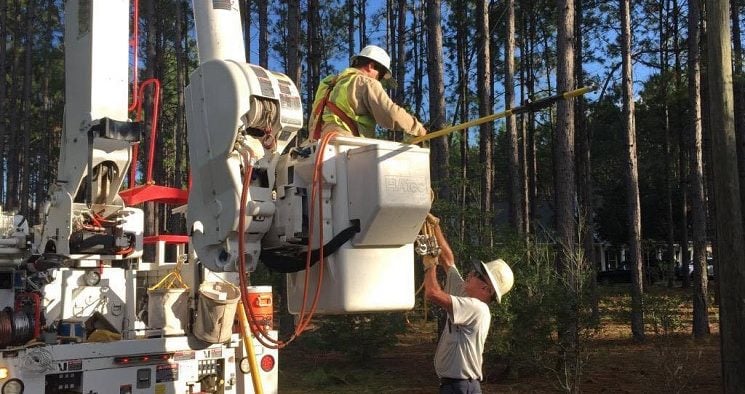 Georgia Power customers will be charged more for electricity over the next several years after the Public Service Commission approved a $1.8 billion plan on Tuesday that critics call a sweetheart deal that boosts company profits and doesn’t go nearly far enough to support clean energy efforts like solar power and coal ash cleanup.

The rate hike Georgia Power requested this summer was 39% more than the one approved Tuesday, but it still saddles customers with higher costs ahead of the company’s pursuit for ratepayers to cover billions of dollars for coal ash cleanup, to recover fuel costs and subsequent increases as the long-delayed Plant Vogtle nuclear expansion comes online in 2023.

Next year’s 2.8% increase will be followed by consecutive 4.5% increases in the following two years, with the exact dollar amount still to be decided.

Critics panned the plan for striking a major blow to a popular solar power pilot program capped at 5,000 Georgia homes and businesses. The new plan grandfathers the current customers for another 15 years, allowing them to save significant amounts of money by selling excess electricity to Georgia Power.

However, despite calls from clean energy groups and the solar industry to expand the program, regulators Tuesday backed Georgia Power’s stance against net metering, which allows customers who generate their own energy to receive a financial credit on their electric bills for any surplus energy fed back to their utility.

In a 4-1 vote, the commission approved Chair Tricia Pridemore’s motion to set the profit margin range from 9.5% to a maximum of 11.9%, which is the ceiling at which Georgia Power would have begun sharing profits with customers. The lone vote against Georgia Power’s rate plan came from Commissioner Lauren “Bubba” McDonald, whose efforts to lower the company’s proposed profit margin failed.

Gina Webber, interim director of the Sierra Club Georgia chapter, called it astounding that commissioners approved a maximum profit ceiling that is 2% higher than the national average for similar utilities.

“Today, the PSC gave Georgia Power the authority to rake in huge profits on the backs of hardworking Georgians who are already struggling to make ends meet,” she said. “This is politics as usual at the Public Service Commission: Giving the company they’re elected to regulate a sweetheart deal while making Georgians pay the highest energy bills in the country.”

In its short-term outlook for 2023, the federal agency estimated that prices would increase 3.3% from this year and currently stand 7.5% higher than in 2021.

Pridemore argued that the top of the profit range is not affecting customers’ rates, and encourages the company to be as efficient as possible.

The most significant cost-saving changes in the pending agreement compared to the company’s opening proposal is a $180 million cut in operations and maintenance expenses and a plan to spend $600 million less on electric grid improvements.

“I oppose any further reduction because of the current environment of increasing interest rates and record inflation,” Pridemore said. “It is important to hold the company close to current band levels in order to maintain the company’s financial integrity and efficiency incentives to ultimately benefit customers.”

The company and customers will each get 40% of the excess over the profit margin threshold, while Georgia Power will spend 20% on regulatory assets. Pridmore’s colleagues also approved the division of profits above the profit margin ceiling. Although the plan doubles the amount of money customers are reimbursed after reaching a ceiling, Georgia Power’s return on equity is much higher than the 9.5% for similar U.S. utilities, according to Fitch Ratings.

By increasing earnings by 1%, the company can line shareholder pockets with another $210 million before distributing profits to customers, McDonald argued.

Georgia Power’s parent company, Southern Co., generated $13 billion in profits over the last decade because it enjoys protection as a regulated monopoly, McDonald said during a hearing last week.

The community solar program will also be sold to solar residential powered customers for $24 per month, while commercial customers can purchase it for $25, which is less than the $27.99 per month for households and $29.99 for businesses that Georgia Power requested when the PSC began considering the new three-year plan.

“This change will improve the economics of rooftop solar for our customers and encourage more adoption of solar and Georgia,” said Commissioner Fitz Johnson, a board member appointed by Republican Gov. Brian Kemp.

According to the PSC’s agreement, Georgia Power’s statewide electric transportation program will receive 65% of the requested $90 million budgeted after it was in line to be slashed in last week’s agreement between the commission’s staff and the utility.

The new three-year plan rejects pleas by environmental organizations to store toxic coal ash in lined pits instead of the company’s preferred cap-in-place method plans, which leave toxic ash sitting in groundwater at several of its old coal-fired plants.

So far, Georgia Power has recovered hundreds of millions of dollars in coal ash cleanup costs from its customers, and its executives have said it expects to ask the PSC to approve more cost-shifting to ratepayers next year. The company plans to store toxic coal ash inside unlined ponds, a decision that goes against a recent Ohio utility’s order in November by the U.S. Environmental Protection Agency to stop dumping coal ash into unlined storage ponds and ramp up cleanup efforts.

Georgia Power has been sealing toxic ash in unlined pits at some of its coal-fired plant polluted sites as it prepares to close the two coal-fired power generators still operating. The company generated electricity for decades by burning coal at dozens of plants across the state.

Charline Whyte, senior campaign representative for the Georgia Sierra Club’s Beyond Coal Campaign, said that Georgia Power has been sealing toxic ash in unlined pits even though it has long known of the potential for environmental damage.

“It is unacceptable that ratepayers end up paying for Georgia Power’s mess. Thanks to the PSC, Georgia Power gets to collect money to clean up coal ash that it knowingly stored unsafely for decades. Federal rules and recent rulings clearly state that coal ash cannot be in contact with groundwater. Yet, Georgia Power still gets to recover the cost to cap-in-place millions of tons of coal ash without a liner to protect water from toxic pollution,rather than doing. what is safest for Georgia’s watershed.”