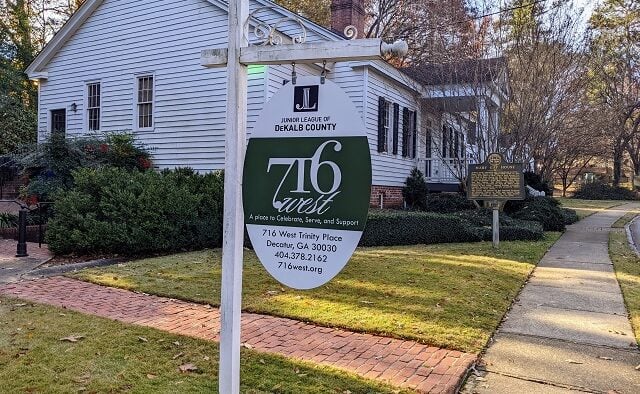 The Junior League of DeKalb County has unanimously voted to rename the Mary Gay House in Decatur to 716 West in a stern rebuke to the "Confederate heroine." Photo by Dan Whisenhunt
Share

Decatur, GA — The Junior League of DeKalb County unveiled the new name Mary Gay House in Decatur during a ceremony on Dec. 7 at the venue.

The home will now be called 716 West.

The Junior League recently voted to rename the house as a stern rebuke to the home’s namesake “Confederate heroine.”

716 West will continue to serve as the headquarters for the Junior League, as well as a community space. The venue is often used for weddings, birthdays, retirements and other celebrations.

“It is imperative that our home, our business, and that this community hub is a space that reflects our values,” Junior League member Mercedes Ball said. “Diversity, equity, inclusion and belonging have to be more than just boilerplate language on a website. Our values demand that. These values require use to actively seek to improve our organization to ensure that we are actually able to improve our community.”

The home is a popular wedding venue, hosting anywhere from 20 to 50 weddings a year, according to a spokesperson for the League.

Junior League President Beth Daniell said the decision to change the name of the house has been in the works for some time.

“We started this conversation nearly three years ago and today marks a significant milestone in our journey toward a more inclusive and supportive organization in DeKalb County,” Daniell said. 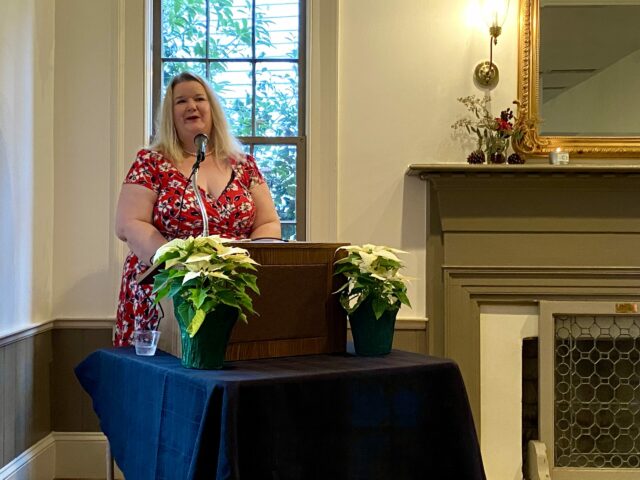 Junior League of DeKalb County President Beth Daniell gives remarks at the unveiling of the name change of the Mary Gay House on Wednesday, Dec. 7. Photo by Zoe Seiler.

Gay, an author and a poet, lived in the house from 1850 to 1914, according to its historical marker. It was initially on Marshall Street, but the Junior League, which has been the house’s custodian for 40 years, moved it to West Trinity in 1979. The marker in front of the house, which will soon be taken down, says, “She is best known for her ‘Life in Dixie During the War’ which describes the Union siege of Atlanta and the tribulations of the home front.”

Those tribulations, of course, were the direct result of the South trying to preserve slavery.

“Mary Ann Harris Gay has long been a historic celebrity, and even a hero, in this community, praised for her determination and pluck and her generosity to those in need,” Wilson wrote. “Indeed, it is even true that she was the inspiration and model for Scarlett O’Hara. And like Scarlett O’Hara, much of her struggle was due to her own arrogance. Because of her vehement support of white supremacy, Gay lost her ill-gotten fortune, an inheritance that was built upon theft, murder, and slavery.”

“These were husbands sold apart from their wives, parents separated from their children,” Wilson wrote. “Their lives and struggles have been overshadowed by Mary Gay’s vainglory for far too long. With the upcoming removal of her name from a building in Decatur, perhaps this woman will finally get what she so greatly deserves: obscurity.”

The house was built before 1825 and is one of the few remaining pre-Civil War structures in the Decatur area. It was originally located on Marshall Street, but moved to West Trinity Place in the 1970s when the Marriott Hotel was built in downtown Decatur.

“After a lot of discussion among city and county leaders, the DeKalb Historical Society and the Junior League, the Junior League assumed ownership of the house in 1979 and raised the funds necessary to move and restore the house into the structure where we are today,” said Mary Hinkel, a League member who spoke during the ceremony. “One of the key reasons for the league undertaking this project was the opportunity to adapt the restoration with a space for community use by adding the rear portion of the house…”

The history of the facility is a testament to what the Junior League has, can and will accomplish, said Angela Turk, a past president of the league.

“We realize we are not the league of the past and must adapt and refocus on how and what we will achieve to continue our work. With changing social and economic environments, we are meeting new challenges and new and positive opportunities,” Turk said.

The unveiling of the new name 716 West charts a new course and fosters a more inclusive identity, she added.

“As 716 West, we are creating a welcoming future that serves all, supports all and celebrates all,” Turk said.

“We are evaluating our legal options,” League President Daniell said. “The interesting about the set-up here is the city of Decatur owns the land, but we own the house. There is some gray area in the law on privately owned monuments on public land.”

The Junior League has considered moving the sign from the center of the stairs over to the side of the property that’s closer to the history center.

“Having the conversation about changing the name of the house has helped people frame it in its proper historical context,” Daniell said. “They are aware that there’s legislation, there’s nothing we can do about the historical marker, but we’re doing everything we can to make sure that our outside reflects our inside.”