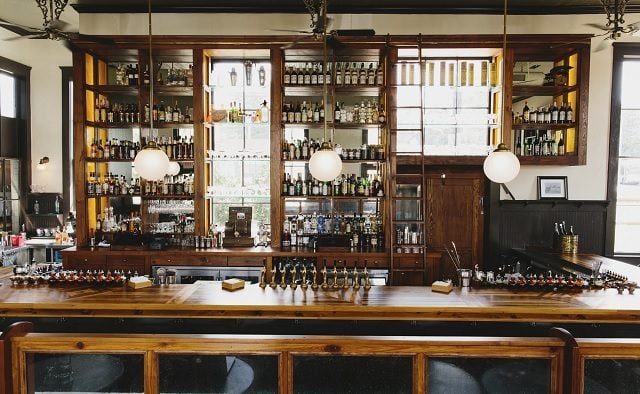 Kimball House has been a longtime tenant of the Old Depot building in Decatur. The Decatur Downtown Development Authority, at its Oct. 14 meeting, approved a resolution for the sale of the building and entered into a $1.385 million sales agreement for the building at 303 E. Howard Avenue to Kimball Mill, LLC.

Kimball Mill is the operator of Kimball House. The restaurant has been at this location for about 10 years, and Kimball Mill is now in a position to purchase the building.

“There are so many things in this business that are out of our control, but we’ll never have to worry about a staggering rent increase. There will always be plenty of concerns, but prohibitive occupancy costs will not be one of them,” Rackley tells Eater. “We have taken some pretty lengthy strides over the last couple of years to make sure the people that want to be here with us are taken care of. Having control over this piece of the puzzle really strengthens that ability,” he adds.

The DDA owned the Old Depot building for about 15 years.

“Our role as the DDA was to own that building and try to get it to a stabilized situation where the environment around it and the immediate area was doing well. Our role is not to continue to be landlords of commercial property,” said Conor McNally, Decatur DDA Chair.

The funds from the sale of the property will be reinvested in downtown Decatur following the new downtown master plan being commissioned by the city and the DDA.

“The mission of the DDA is to spur economic development in Downtown Decatur, and at the time the DDA acquired the property eleven years ago, the Old Depot District was relatively barren,” McNally said. “Thanks largely to the success of Kimball House as an anchor tenant, the area has seen tremendous growth from the private sector, featuring numerous retail tenants and residential developments that prove it is ready to stand on its own.”

Located at the intersection of East Howard Avenue and East Trinity Place, Kimball House is an acclaimed restaurant known for its southern take on cocktails, steaks and seafood. It was named a James Beard Award semifinalist in 2019 and just celebrated its ninth anniversary in September, according to a press release.

“In our near decade serving this community, we have developed a deep love and appreciation for Downtown Decatur and are passionate about contributing to its success and culture,” Rackley previously said. “With over $750,000 already invested in maintaining and revitalizing the space during our time as tenants, we are even more committed to the preservation of this living landmark as its new owners.”

From an economic development standpoint, the DDA initially saw the potential of the space as a restaurant.

“It’s a great testament to Decatur that operators like that could come in and be so successful, not in a position to buy the building when they started, but now are,” DDA board member Darren Comer said.

Considering its importance to both the economy and cultural history, the property was originally acquired from CSX railroad in 2001 to prevent its demolition due to neglect. That sale included an unusual provision: the depot building had to be relocated approximately 30 feet north, out of the railroad right-of-way.

A local non-profit, Decatur Historic Preservation Alliance, now disbanded, was initially founded to help save the depot building and assisted with fundraising efforts to help move the structure and stabilize it.

Since then, a few restaurants have occupied the space.

“As everyone remembers, that area was an area that had almost nothing going on,” McNally said. “There was none of the development that we see today, in terms of retail or residential, right there against the train tracks. Access wasn’t great, and the space has no parking.”

If Kimball Mill were to sell the building in the future, the DDA would have first right of refusal on the property.