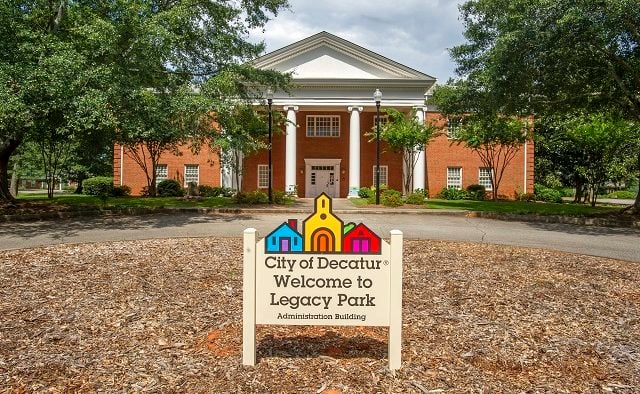 Decatur, GA — The Legacy Decatur board, which oversees Legacy Park, held its annual retreat on Dec. 8. The board discussed updates on some projects that are happening at the park.

– The Decatur Housing Authority was awarded the low-income housing tax credits for phase one of the South Housing Village. DHA hopes to break ground and begin construction in the spring.

The property is located at 700-722 S. Columbia Drive in Decatur. The project, now known as The Village at Legacy, will be 132 units of affordable housing. The site will feature a mix of apartments, stacked flats, and duplexes at the corner of South Columbia Drive and Katie Kerr Drive. The site of the development is about six acres.

The Decatur City Commission, at its Aug. 15 meeting, approved a conditional use permit for multifamily dwelling use in an I-Institutional zoning district at Legacy Park for the affordable housing project.

“The property is zoned I-institutional and is regulated by a comprehensive site development plan and while the future development was found to be in alignment with those plans, the multiple-family and two-family residential uses in the institutional zoning district do require a conditional use permit,” Planning and Economic Development Director Angela Threadgill said.

– Legacy Decatur is still working on the creative village, but the organization decided to slow the process with PadSplit until the funding for the project is ready. An RFP is ready to go for when Legacy Decatur gets funding.

The Creative Village, included in the Legacy Park Master Plan, is made up of four former group residential cottages at Legacy Park that will be repurposed to provide affordable housing and working studios for qualified area artists.

Legacy Decatur expects to receive a $209,000 grant from United States Rep. Hank Johnson (GA-4) that was passed in the federal appropriations bill this year. It is unclear when that funding will come through.

PadSplit would help recruit tenants and manage the creative village planned for the Edwards and Trustees Cottages at Legacy Park.

The Decatur Arts Alliance will also be part of the application process. Future tenants would have to fill out two applications – one for PadSplit and one for the arts alliance that would include an artist portfolio.

– Proposals were due on Dec. 15 for the track and field at Legacy Park. A committee was established that includes city staff, staff of City Schools of Decatur and a representative from Legacy Decatur.

Legacy Decatur board member Mark Ethun said there will be some level of public engagement in the process to balance the different stakeholders as well as the people who will be using the track.

After the beginning of the new year, the city, City Schools of Decatur and Legacy Decatur will begin evaluating, interviewing and selecting a design firm.

“I think a few of those things that we’re really trying to look for is careful integration within the landscape in context,” Ethun said. “I think I used in the RFP, stitching together all the different areas that come together where that track’s going to be, whether that be south housing village, the pond, barn area, the walking paths, the cross-country [course].”

According to the Legacy Park Master Plan, a competition level track and field was one of the most requested facilities during the master planning process. The concept in the master plan has the track and field located to the east of the historic core and near the next to the conservation easement of the park.

“I think where it kind of splits a little bit because we don’t know exactly what the solution is, is the original concept included space programming for things like concessions, restrooms, a changing area, and those things,” Ehtun said. “I think there are two schools of thought on that. We either build a new building or use the existing gymnasium building, renovate or adapt it somehow,” Ethun said.

Parking will also be addressed throughout the design process.

– The inclusive playground is coming in 2023

“The equipment is scheduled to arrive this month,” Legacy Decatur Executive Director Lyn Menne said. “We got the money, we got the order in, we got the design…”

Legacy Decatur’s goal is to install the new equipment in January.

The idea of playscapes and equipment designed for kids of all ages and abilities, which was originally suggested by Decatur elementary school students, ultimately emerged as a priority in the Legacy Park Master Plan after it was a popular topic of discussion during the 2018 community visioning process.

The project is being funded through a $145,000 Community Development Block Grant from DeKalb County and the city of Decatur pledged $114,000 in matching funds for a project budget of $259,000.

The plans include a poured rubber play surface for safety and easy access, and a range of play options for children — climbing equipment, slides, monkey bars, tunnels, a group swing, and a variety of sensory play stations, according to the newsletter.

– The renovations to the stone dairy barn have been completed.

“They finished the interior build out. The city hosted the DeKalb County legislative delegation in November. It was a beautiful event to kick off the barn as an open new venue in the city of Decatur,”  Legacy Park Director of Programs Madeleine Henner said. “After talking to some venue coordinators, think we can really boost our revenue by putting our spaces on Peer Space. It’s like Airbnb for meetings, basically.”

Some landscpaing may need to be done, Menne added. There are some drainage issues and Legacy Decatur may look at putting in a swale to address the problem.

The barn will be an outdoor classroom and an event space. The phase I project of repairing the roof has been complete, and phase II will focus on the interior of the barn.

The dairy barn was built in 1914 and is one of the oldest structures on the Legacy Park property. It is the last remaining building associated with the farming heritage on the site, said Felix Floyd, facilities maintenance superintendent, in a memo.

“The barn improvements contract being recommended includes concrete paver entryway, a wooden deck on the pond side of the barn, the addition of sliding barn doors, operable shutters, concrete topping for the floor, circulation fans, new lighting and minor stud wall modifications,” Floyd said in the memo. “The interior work is the second phase of a two-phase project intended to upgrade the barn for use as an open-air facility similar to the park pavilions located in other city-owned parks.”

“Staff prepared a revised FY2022 budget based on anticipated revenues and expenditures through the end of FY2022,” the agenda packet states. “The Legacy Park signage program bid is in progress, so funds currently budgeted for phase I will be carried forward into FY2023. The proposed FY2023 includes a conservative estimate for event and film rentals and anticipates adding a full-time staff person for a total of two full-time staff members and the elimination of the existing part-time staff position in July 2023.”