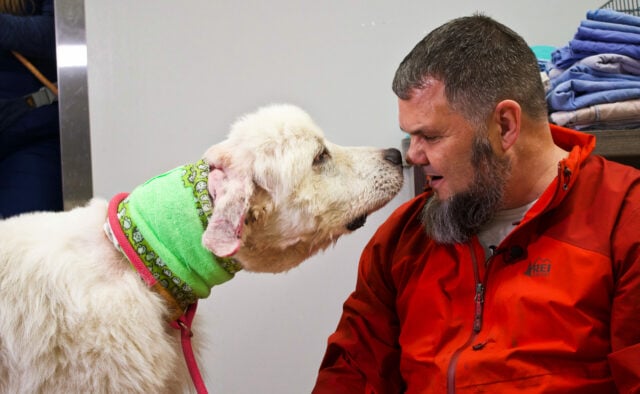 Casper attempts to give his owner John Wierwille a kiss at the LifeLine Animal Clinic on Dec. 1. Photo by Zoe Seiler.
Share

Casper, a 21-month-old Great Pyrenees, is a livestock guardian dog. He recently killed eight coyotes while protecting his sheep and sustained significant injuries.

Dawning a cone and multiple bandages, Casper was excited to see Wierwille and receive lots of pets and love. The bandage around his neck has sheep printed on it, so Casper can still be with his herd while he’s at LifeLine.

“I can’t even explain how good it is to see him right now because I feel like there was no way he was going to live when I saw him, and he looks really good right now,” Wierwille said. He’s injured, but he looks really good. He’s happy. He’s being a really well-behaved Great Pyrenees inside a place. He’s a bit of a hero.” 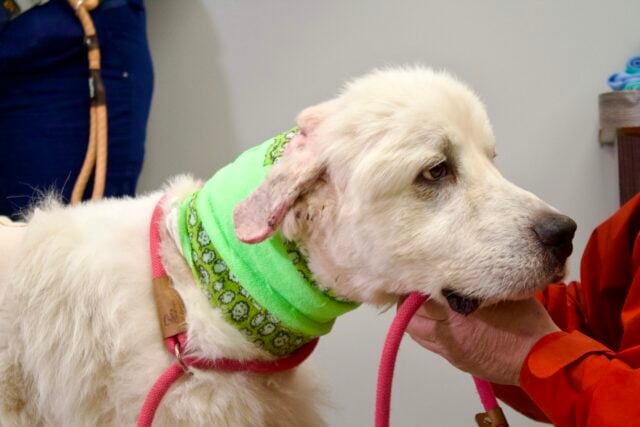 The LifeLine staff has become fond of Casper, and he has chosen his favorite caretakers. Overall, Registered Veterinary Technologist Katrina Coleman has been pleased with Casper’s progress and healing. She has been in the veterinary field for 17 years. Coleman said Casper’s injuries are some of the worst she has seen.

Casper had a few open wounds and missing skin after the encounter with the coyotes. Coleman has been using manuka honey as a salve to help heal Casper’s wounds. It promotes granulation tissue and has antioxidants and its antibacterial and antiviral. The honey has helped cause new tissue growth.

She added that they use manuka honey on open wounds that are hard to heal, wounds that if they are closed risk infection or if a wound needs to stay open to heal on its own.

Casper is a character, Coleman said.

“He is a brat, if I’m being honest,” Coleman said, jokingly. “He loves it here. We let him roam around in the morning before we get our shifts started. He walks around, and he has to check everybody out and get snacks. He knows when medicine is in stuff, so we have to hide real good.”

Wierwille said in a Facebook post on Nov. 28 that the veterinarians were able to close the wound on Casper’s neck.

“This is really great because it is so much easier to control infection when the wound is not so open, and if all goes well, he will need no skin grafts in that area. It really is a remarkable bit of news, and we are celebrating,” Wierwille said in the post. “Casper will be back to the Lifeline Clinic [on Nov. 28] for a check-up there and probably to stay for several more days (it is a lot less expensive than boarding and follow up at the emergency vet).”

Wierwille told Decaturish that Casper is doing okay, although is a little stressed being confined for so long. The three major wounds on Casper’s neck, back, and tail are healing pretty nicely. He added that the veterinarian is still worried about the neck wound, although it has been closed.

“The wound on his back is healing very nicely, but at this point he will probably still have a huge scar because there is no tissue to pull it together,” Wierwille said. “His amputated tail is also healing nicely. So, all in all, he is well but still getting heavy care, and I was told last night he won’t be home until at least late next week and even then, we will be bringing him back in every couple days for wound care. One day, though, it seems he will be back out trotting around with his sheep.  A few weeks ago, we could not say that.”

While talking to reporters on Dec. 1, Wierwille reassured Casper that he looks good without a tail. Wierwille told reporters that he can’t believe how far Casper has come in his recovery.

It’s still unknown whether Casper will return to work at some point, but Wierwille promised Casper he’ll get to be with his sheep again. 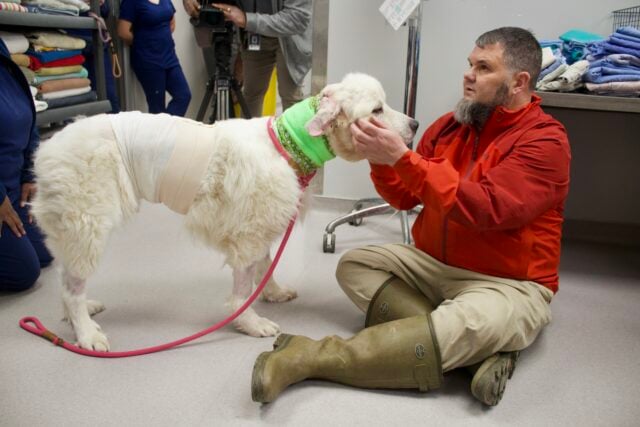 John Wierwille pets his dog Casper, who is receiving care at the clinic at LifeLine Animal Project, on Dec. 1. Photo by Zoe Seiler.

As a livestock guardian dog, Casper is raised in the field with the animals he will protect. In his case it’s sheep.

“The first day we brought Casper in, he came in, and he walked in, and he got all of the sheep in one little circle then he went over to the littlest one and put his head right on top of it, just to say ‘I got you,'” Wierwille said.

In the early hours of the morning on Friday, Nov. 4, Wierwille heard Casper barking and went outside to check on his dogs and sheep. His dogs usually don’t bark unless they feel a threat or are warning off other creatures, “but they don’t bark otherwise because a bark is for a purpose,” he previously said.

Wierwille had been clearing a small property by his home to have some extra space for his sheep. Early the morning of Nov. 4, Casper and Daisy, were protecting five sheep near Wierwille’s home. As he walked outside in the dark, he saw several coyotes. Daisy had the sheep backed up in a corner and was standing in front of them. Casper was standing in front of Daisy.

In total, Casper killed eight coyotes. Some readers have been skeptical of the body count. Wierwille explained how he determined the number of coyotes Casper killed.

“The first three were still in the sheep pen. Two more were right outside the pen,” he said. “Two more were on the side of the tracks, about 150 – 200 yards away from where Casper went out of the pen.  We found the eighth one in the creek on Saturday while we were searching for Casper. … I suppose something else could have killed them.  I did not see all the kills.  But I don’t think so. My guess is: He just did it one coyote at a time and finally, they ganged up on him.”

Wierwille and his friends searched the areas from Mason Mill to Frazier Road, and in the neighborhoods on both sides of Burnt Fork Creek and the railroad line. They had almost given up hope on Saturday after searching for Casper with no luck. Wierwille finally found Casper on Sunday.

“There’s this old chicken hutch that we raise the baby chicks in, and Casper poked his out of it as we were walking by. He scared the bejeezus out of me,” he said.

He was taken to an emergency vet clinic and has also been receiving care at LifeLine. Casper was receiving daily wound care, but is now getting wound care about every three to four days as his injuries are healing and closing up.

Wierwille has been appreciative of the veterinarians who are taking care of Casper, especially the staff at LifeLine.

“Without them, we wouldn’t have him,” Wierwille said. 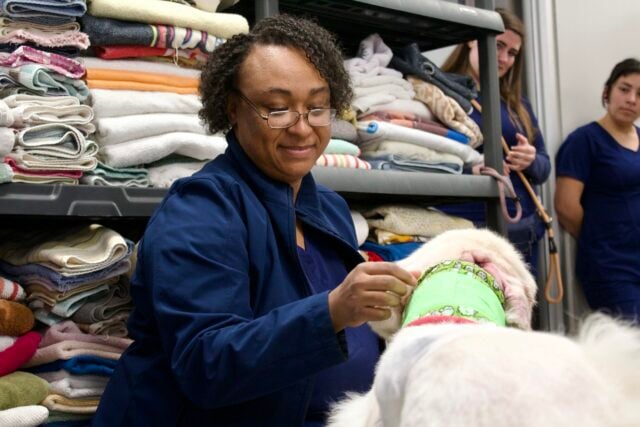 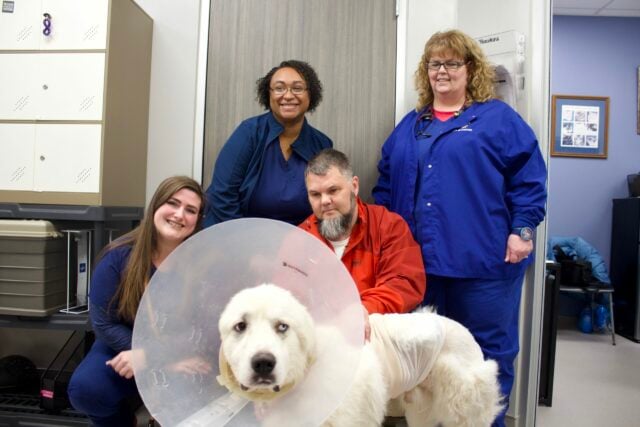