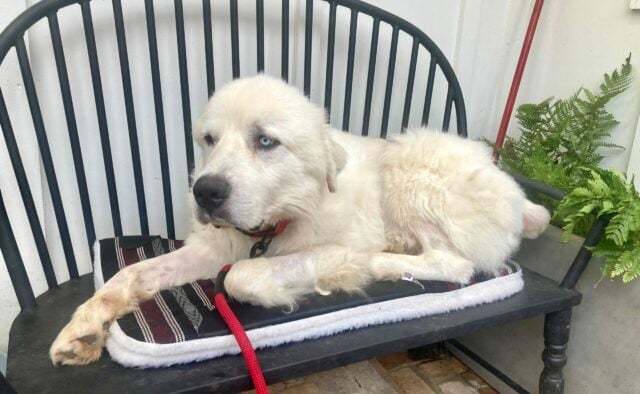 Greater Decatur, GA — Casper, the livestock guardian dog that recently killed eight coyotes, is home now and is continuing to heal from his injuries. Casper returned home on Monday, Dec. 12.

The 21-month-old Great Pyrenees took on 11 coyotes, killing eight, in November while protecting five sheep along with another dog, Daisy, at a property near John Wierwille’s home. Casper suffered multiple significant injuries.

He spent about 17 days at an emergency vet clinic and was at LifeLine Animal Project for about two weeks. Casper was in good spirits as he greeted his owner, Wierwille, at the LifeLine clinic earlier this month.

“I can’t even explain how good it is to see him right now because I feel like there was no way he was going to live when I saw him, and he looks really good right now,” Wierwille previously said. “He’s injured, but he looks really good. He’s happy. He’s being a really well-behaved Great Pyrenees inside a place. He’s a bit of a hero.”

The veterinary staff at LifeLine previously said Casper will make a full recovery.

“Dr. Brosman decided Casper was doing well enough at home to drop his sedation, and we are starting to see our old Casper again with some new twists,” Wierwille said. “He has enjoyed riding along with me in the truck for check-ins and whatever other work I have to do.  He is even getting in and out of the truck by himself most of the time. Other times, I still have to pick his 90 [pounds] up and put him in the truck.”

Casper also has a pile of blankets in one vehicle that he loves to crawl under and sleep while Wierwille drives, and he doesn’t like anyone messing with his blankets.

Wierwille took Casper’s cone off a few days ago. After telling him now what felt like over 50 times, he hasn’t bothered his wounds and enjoys not having to wear the cone.

But what Casper really loves about being home is seeing his sheep.

“He stands by the fence and quivers at them,” Wierwille said. “He sniffs every one of them that comes close. He tries to walk the perimeter at each site. It is clear this is something familiar and exciting for him, and it makes us think he will end up going back out to jobs as a livestock guardian someday.” 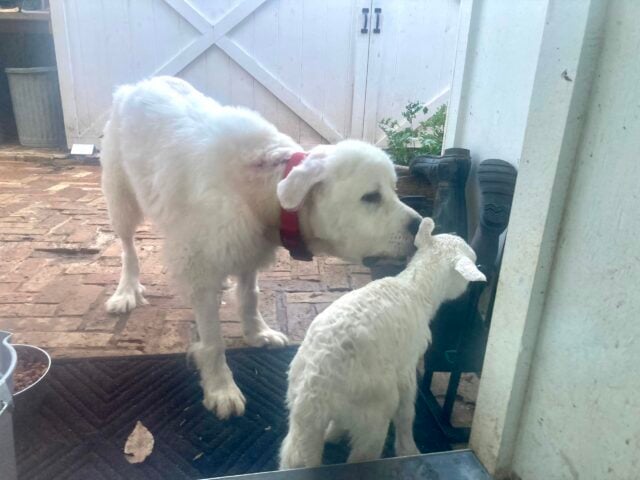 One of the sheep has mastitis and her lamb isn’t getting enough milk. Wierwille brought the lamb inside to bottle-feed.

“Casper did not leave my side,” Wierwille said. “When he was finally too much in the way and almost knocking me down, I put him out on the side patio, so he could see me through the glass door and I could get the feeding done. He stood there and whimpered at me, pawed at the door, danced in circles, barked a few times, then jumped up and managed to open the door with his paw, so he came in and sat next to the lamb while I fed it.”

When Wierwille put the lamb down, Casper examined it thoroughly.

“Right now, they are both on the side patio and this huge dog is following that one little lamb around making sure it is ok,” he said. “The lamb fell down, and he nosed it up. The lamb got stuck in a corner, and he pulled it out.  He has been cleaning it, too.  His instincts for sheep care are really good.”

For now, Casper is mostly an inside dog.

“He gets lots of bellyrubs, head pats, and hugs from the family, and he clearly likes that,” Wierwille said. “He is pushing some limits, though. I slept on a basement couch for the first few nights because he was very agitated when alone. This morning, guess who was sleeping in that spot when I came down?  Also, he is the messiest eater in the world.  He spills at least half of whatever you give him, every time.”

The family loves having Casper home. They enjoy watching him play with the puppies Daisy had a few weeks ago, and love seeing him interact with the sheep.

“In short, so far, so good,” Wierwille said. “In fact, probably way better than good because his wounds are still looking really good. They continue to close as the skin and hair are growing back, and he is acting more like himself.  He will go off antibiotics when they run out this weekend as planned, and then we will really have to watch for infections.  We will continue to monitor the wound and I expect Lifeline will call us in for a check-up before too long, but it seems unlikely there will be permanent care required.” 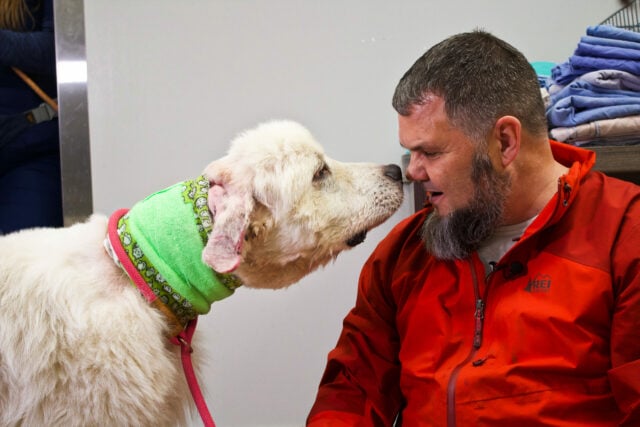 Casper attempts to give his owner John Wierwille a kiss at the LifeLine Animal Clinic on Dec. 1. Photo by Zoe Seiler.

In the early hours of the morning on Friday, Nov. 4, Wierwille heard Casper barking and went outside to check on his dogs and sheep. His dogs usually don’t bark unless they feel a threat or are warning off other creatures, “but they don’t bark otherwise because a bark is for a purpose,” he previously said.

Wierwille had been clearing a small property by his home to have some extra space for his sheep. Early the morning of Nov. 4, Casper and Daisy, were protecting five sheep near Wierwille’s home. As he walked outside in the dark, he saw several coyotes. Daisy had the sheep backed up in a corner and was standing in front of them. Casper was standing in front of Daisy.

In total, Casper killed eight coyotes. Some readers have been skeptical of the body count. Wierwille explained how he determined the number of coyotes Casper killed.

“The first three were still in the sheep pen. Two more were right outside the pen,” he said. “Two more were on the side of the tracks, about 150 – 200 yards away from where Casper went out of the pen.  We found the eighth one in the creek on Saturday while we were searching for Casper. … I suppose something else could have killed them.  I did not see all the kills.  But I don’t think so. My guess is: He just did it one coyote at a time and finally, they ganged up on him.”

Wierwille and his friends searched the areas from Mason Mill to Frazier Road, and in the neighborhoods on both sides of Burnt Fork Creek and the railroad line. They had almost given up hope on Saturday after searching for Casper with no luck. Wierwille finally found Casper on Sunday.

“There’s this old chicken hutch that we raise the baby chicks in, and Casper poked his out of it as we were walking by. He scared the bejeezus out of me,” he said.

He was taken to an emergency vet clinic and has also been receiving care at LifeLine. Casper was receiving daily wound care, but is now getting wound care about every three to four days as his injuries are healing and closing up.

Wierwille has been appreciative of the veterinarians who are taking care of Casper, especially the staff at LifeLine.

“Without them, we wouldn’t have him,” Wierwille said.

“The last I heard it was expected Casper’s total costs will come out to something close to $25,000, so his recovery is a financial miracle if nothing else,” he said. “We knew we lived in a great neighborhood, but this experience has just made it so clear. We hear that the total donations have far exceeded the total for his care, and we are very excited that Lifeline will receive all that support.”