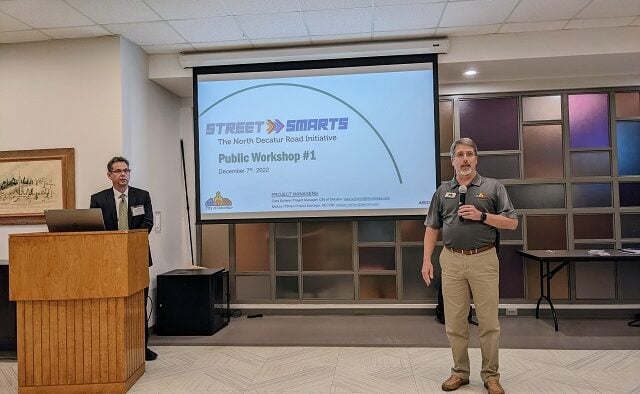 Decatur, GA — The city of Decatur held a public workshop at North Decatur Presbyterian Church on Dec. 7 to decide what to do about the intersection of North Decatur Road and Superior Avenue, nicknamed “killer corners” by neighbors.

The city hired the infrastructure consulting firm AECOM to support the planning process for a project addressing safety at the notorious intersection.

The proposed project will stretch from Clairmont Road to Medlock Road along North Decatur, and will involve participation from not only the city of Decatur but MARTA, the Georgia Department of Transportation, and DeKalb County.

DeKalb Commissioner Jeff Rader and MARTA’s project manager for the Clifton corridor, Bryan Hobbs, were both in attendance.

O’Brien stated that the project came from Decatur’s Community Transportation Plan Update from 2018 and the city’s stormwater improvement plan.

Dwayne Tedder, an associate vice president and program director at AECOM, began by reviewing collected traffic and crash data. Along the relevant section of North Decatur Road, 21,000 cars pass in 24 hours. Traffic along Clairmont Road was measured as high as 37,000.

Tedder presented a heat map that showed that most accidents occur at the major intersections at either end of the project area, at Medlock and Clairmont. However, among the side streets, Superior is a “hot spot” for accidents. From 2013 to 2021, there were 36 crashes at the location. 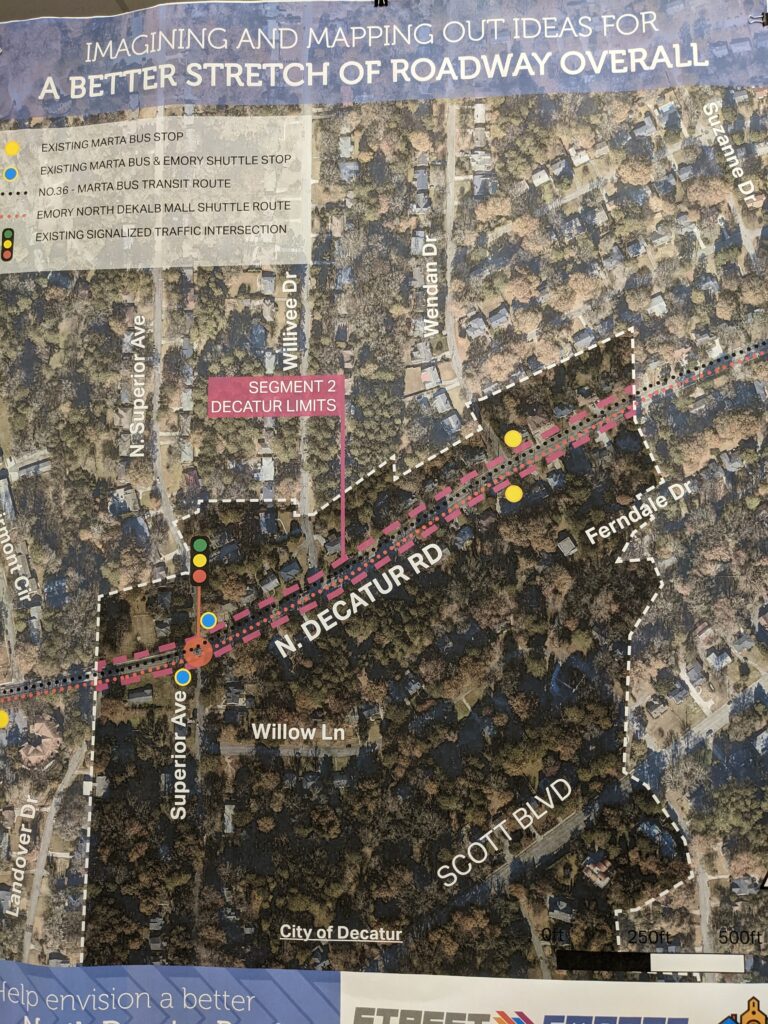 A map displayed at the Dec. 7 meeting. Photo by Sara Amis

However, to solve those problems, the city needed a cooperative effort with other entities, including DeKalb County, MARTA, and GDOT.

“A lot of what happens at that intersection happens because of traffic coming in from unincorporated DeKalb County,” Garrett said, adding that the kind of traffic calming measures that the city could implement by itself were not enough.

Commissioner Rader said that he appreciated that Decatur was taking the lead on the project and had hired a consultant.

“Obviously, it’s going to require a big collaborative effort,” Rader said.Rader said that MARTA’s proposed rapid transit project, the Clifton Corridor, will likely add another layer of complexity and that as the city, county and MARTA plan the North Decatur Road project, they need to think big.

“We’re not going to be able to stop the accidents and the fatalities that have been happening there unless we make it a different kind of road,” Rader said.

Resident David Newton lives near the intersection of North Decatur and Superior, where a MARTA stop is located. Newton said he voluntarily provided a park bench for people to sit on while waiting for the bus or the Emory shuttle. He has had to replace the park bench three times, twice because it was destroyed in car crashes.

Newton said that his hopes for the North Decatur project were for improved safety and also an improved community.

The City of Decatur requests feedback from nearby residents and travelers along that section of North Decatur Road via a survey. To take the survey, click here.