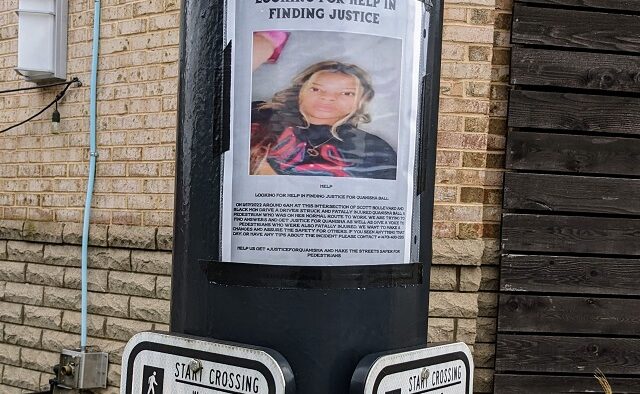 A flyer distributed by Quanisha Ball's mother is posted at the intersection of Scott Boulevard and Blackmon Drive. Photo by Dan Whisenhunt
Share

Greater Decatur, GA — A young woman died after a driver behind the wheel of a Dodge Challenger hit her while she was crossing Scott Boulevard in Greater Decatur on Nov. 17. The driver stayed at the scene.

As is often the case in pedestrian deaths, the initial police report blamed the pedestrian, saying she was outside the crosswalk when she was hit.

But Quanisha Ball’s mother, Courtney Thompkins, and her former manager at Emory’s Winship Cancer Institute say that story doesn’t track with what they know about Ball, who was 31 when she died. She loved life. She was careful and responsible. And, as someone who regularly walked to get to work, she knew how dangerous Atlanta traffic could be.

Thompkins contacted Decaturish this week and asked for a deeper dive into her daughter’s story. 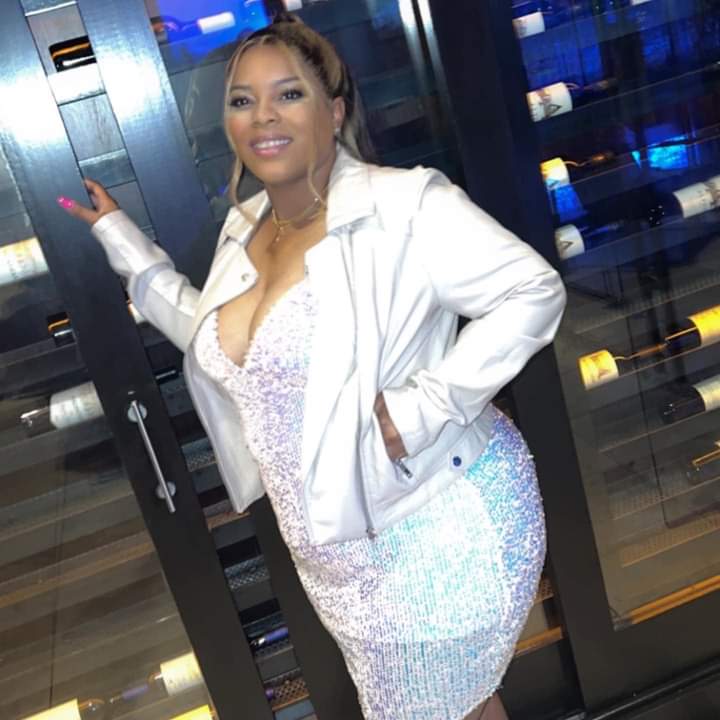 The driver, who has a Florida address, hasn’t been charged with any crimes and didn’t return a message seeking comment. The DeKalb County Police report suggests that the driver’s account of what happened is the only one that the investigator heard. The report lists no other witnesses.

The police report and interviews with people who knew Ball raise questions about the police department’s account of what happened on the morning of Nov. 17. Some details of the report stand out as worthy of further examination: Ball went airborne when the Dodge Challenger hit her at the intersection of Scott Boulevard and Blackmon Drive, meaning she could’ve been knocked out of the crosswalk. While the report doesn’t say how fast the driver was going, the Challenger was damaged so badly that it had to be towed from the scene. 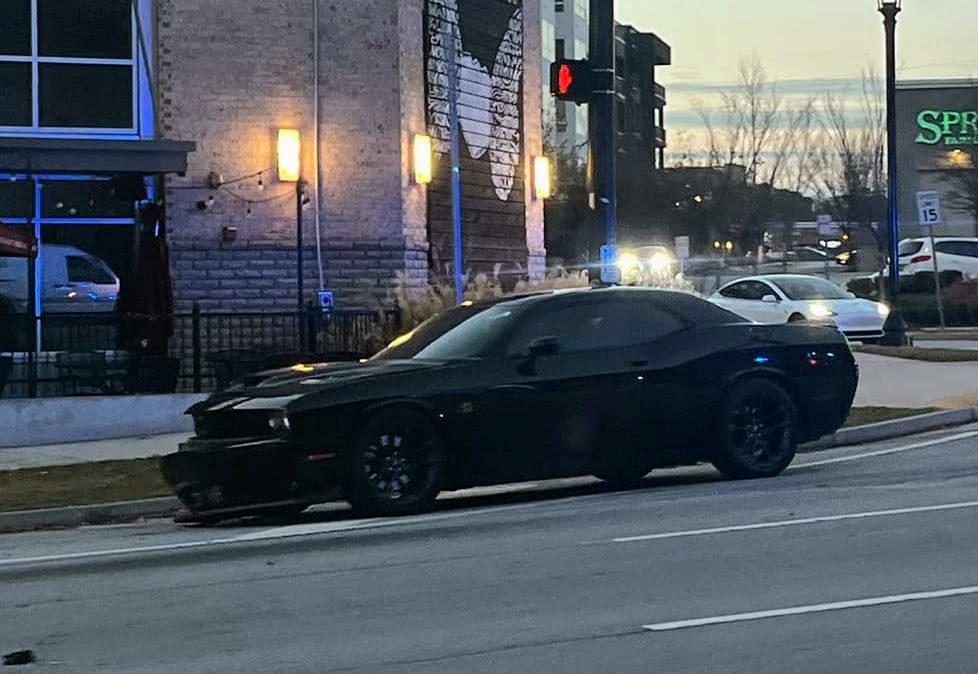 A bystander took this photo of a Dodge Challenger after its driver struck and killed Quanisha Ball on Nov. 17, 2022. Photo provided to Decaturish

The posted speed limit on Scott Boulevard is 45 miles per hour, according to the report. Data provided by the AAA Foundation for Traffic Safety show only four out of 10 pedestrians struck by a vehicle traveling at that speed survive, on average. The driver was not given a drug or alcohol test, the police report showed.

A DeKalb Police spokesperson said the police department couldn’t specify how it determined that Ball was not in the crosswalk, saying the investigation is still active and ongoing.

“This is still an active and open investigation and will be that way for eight to 12 weeks after the accident while we await the reports from the Medical Examiner and the GBI,” the spokesperson said.

The spokesperson said the driver wasn’t given a drug or alcohol test because he didn’t show any signs of impairment.

“Cooper vs State is the standard as far as DUIs are concerned,” the spokesperson said. “It basically says that if the driver is not showing any signs of impairment or there are no other factors that would lead the officer to believe the driver is under the influence then the State is not entitled to test the driver. In the past if there was a fatality involved the driver was tested, but that has changed with Cooper vs State.”

“When the victim can’t speak for themselves”

Rebecca Serna, executive director of the pedestrian advocacy group Propel ATL, said Ball’s case is similar to other cases around the country.

“The scenario you described happens across the board with pedestrian fatalities, not just locally, but nationally,” Serna said.  “Unless there is another witness — and really more than one because it’s notoriously hard to bear accurate witness — it’s almost impossible to draw a reliable conclusion from the driver, who is biased towards their own perspective when the victim can’t speak for themselves. Police officers are not usually trained on crash investigation.  … Most crash reports simply repeat what the driver said and don’t explore the speed they were traveling at, or how far that might have thrown a pedestrian upon impact.”

Yolanda Cephas knew something was wrong when Ball didn’t show up to work on Nov. 17.

Ball worked as a patient account representative at Winship Cancer Institute, where Cephas was her manager. Ball ran the front desk at the infusion center, getting patients ready for their appointments by ensuring their information was up-to-date and making appointments for people who didn’t have them. Ball had worked at the Cancer Institute for two years and was a stellar employee.

“She was always on time, always here when she was scheduled,” Cephas said. “That’s how I knew something wasn’t right.”

She also knew the route Ball took to work, noting that she walked from her apartment and crossed Scott Boulevard at Blackmon Drive to catch the Emory shuttle that arrives at nearby Medlock Plaza on North Decatur Road. When Cephas learned a driver struck Ball while she was crossing Scott Boulevard on her way to work, and that she was accused of being outside the crosswalk when she was hit, Cephas was skeptical.

Ball was not one to act recklessly when it came to traffic, Cephas said.

“It’s a hell of a city to be a pedestrian”

Ball crossed the seven-lane Scott Boulevard every day on her way to work, Cephas said.

Decaturish visited the intersection on Dec. 7 and consulted the map in the police report. The report indicates that Ball was hit to the northeast side of the crosswalk at Scott Boulevard and Blackmon Drive. 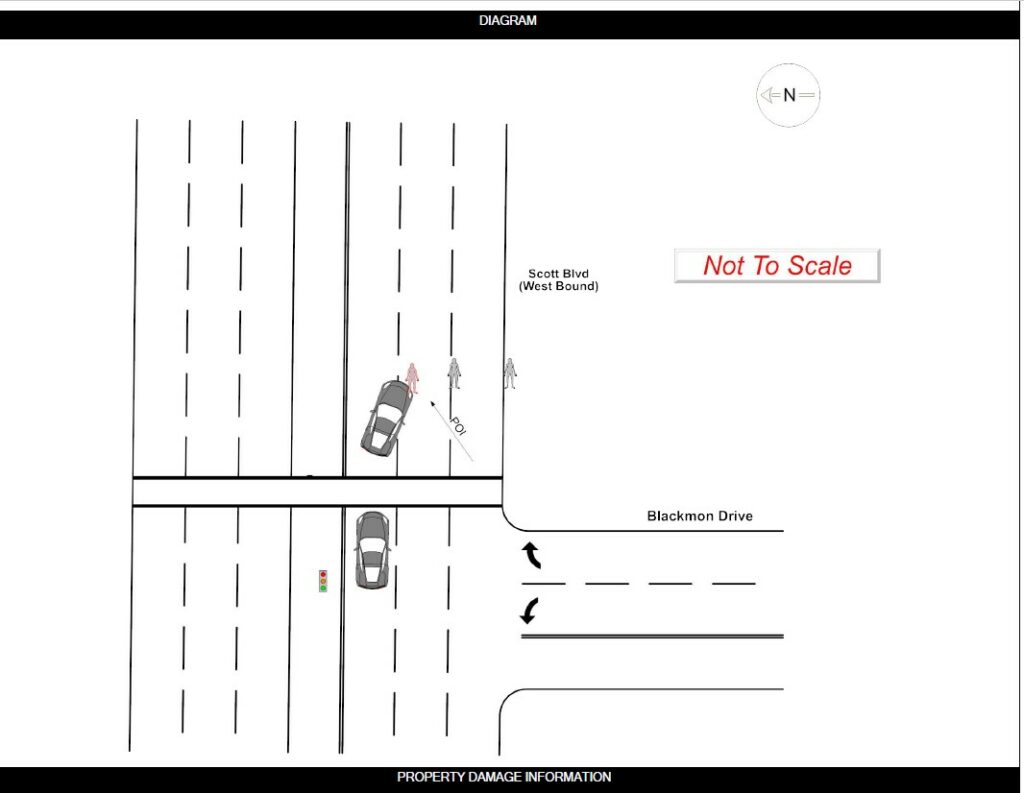 A diagram from the police report about the death of Quanisha Ball.

At the time of the crash, around 6 a.m., Ball would’ve been walking northwest across Scott Boulevard to catch the shuttle to work. If the police narrative is accurate, it would mean that Ball was walking outside the crosswalk on the northeast side, farther away from her destination. 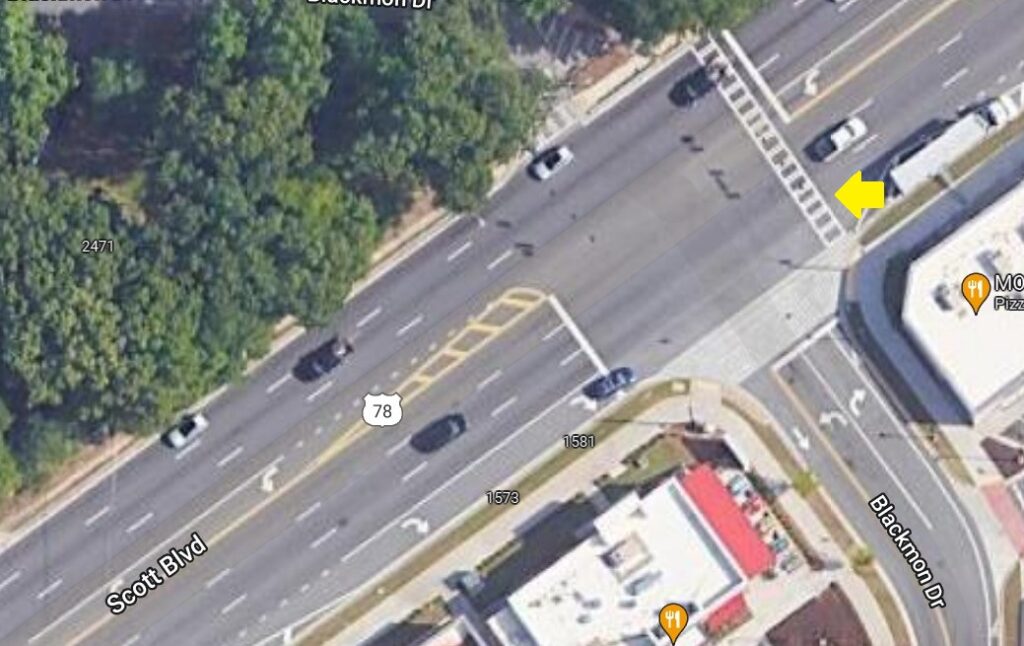 Cephas said that doesn’t make any sense. Setting aside that Ball took the same route every day and was wary of traffic, why would she take a route that put her farther away from her destination and into danger?

“[The report] had her crossing closer to the Chick-fil-A, versus crossing at the crosswalk where MOD Pizza is,” Cephas said. “If she was crossing that way, it would seem as if she’s going in the direction of Chick-fil-A versus the opposite direction of where the shuttle is going to pick her up. It doesn’t even seem plausible she would cross right there.”

When police first confirmed the incident to Decaturish, a police spokesperson said at the time, “Initial investigation indicates the female had darted out into traffic and was struck by a vehicle.”

According to the police report, the driver of the Dodge Challenger was crossing over the intersection of Blackmon Drive when he hit Ball.

“While driving, he suddenly noticed a pedestrian, not in the cross-walk, running across the street into this his lane,” the report says. “He then tried to swerve to the right into [the next lane] to avoid the pedestrian; however, the pedestrian ran back in the same direction also trying to avoid getting struck.”

The report says, “this maneuver caused the front end right side” of the Challenger “to collide with the pedestrian.”

“The pedestrian went airborne and landed on the ground,” the report says.

Cephas started calling Ball’s phone when she didn’t arrive at work. Eventually, someone answered: Sam Benedict, a regular walker in the area who located Ball’s phone in a loading area near the scene. Benedict didn’t witness the crash but speculates the phone was missed by investigators.

“She was hit so hard it flew off and nobody knew where it landed,” Benedict surmised.

He found a number on the phone and called it, connecting with Cephas who told him Ball hadn’t made it into work. He eventually learned about Ball’s fate, and he’s been upset by it ever since. Benedict is a runner and has had friends die after being hit by vehicles.

“It’s a hell of a city to be a pedestrian in,” Benedict said.

He’s familiar with that crosswalk.

“The crosswalk is narrow,” Benedict said. “It’s the only way to cross Scott Boulevard. You’re just risking your life, even if you don’t see any cars … When I cross, I wait until everybody’s stopped, and I look at the driver.”

Serna, with Propel ATL, is familiar with that intersection and crosswalk as well.

“Every time I’m on Scott Boulevard / Lawrenceville Highway, I notice people walking or waiting for the bus under conditions that are dangerous for people outside of cars,” Serna said. “Scott Boulevard is high-speed, high-traffic, with a growing number of popular developments, but the pedestrian environment hasn’t been improved enough, or speeds reduced to make the street safer for everyone.”

She said the lack of a pedestrian island on such a wide road is concerning.

“The NACTO safe crossings guide recommends communities ‘shorten crossing distance and reduce speeding by repurposing or narrowing vehicle lanes,'” Serna said. “NACTO’s Urban Street Design Guide says, ‘as the number of travel lanes increases, pedestrians feel more exposed and less safe entering the intersection. Pedestrian safety islands limit pedestrian exposure in the intersection. They are recommended where a pedestrian must cross three lanes of traffic in one direction…’ On Scott at Blackmon, people are crossing three lanes in one direction and four in the other without a pedestrian island.”

“So was my daughter”

Thompkins, who lives in Pittsburgh, has visited Atlanta to distribute flyers seeking more information about what happened to her daughter. She’s asking anyone with information to call 470-400-2201, and has asked nearby businesses to provide video footage if they have it.

Thompkins said Ball, the oldest daughter of her five children, had recently moved to Atlanta and lived with a roommate. Police provided Thompkins a copy of the crash report about her daughter, which she read with disbelief.

Why did the driver swerve instead of stop? How could the investigator conclude her daughter wasn’t in the crosswalk when there were no other witnesses?

When she visited Atlanta, it didn’t take Thompkins long to see the crossing itself is unsafe, and she said she saw two other women who were almost hit crossing that street while she was distributing flyers about her daughter. Thompkins takes issue with how police have handled the investigation and said investigators “treated my baby like she was nothing.”

“So was my daughter,” Thompkins said. “Why is his word more important, just because she’s passed? She still has a voice to carry on.”

Thompkins said she won’t stop seeking answers about what happened. But she’s certain about one thing.

“There’s no way my daughter would dart out in traffic,” Thompkins said. “She loved her life. She loved her job. She was settled in Atlanta.”