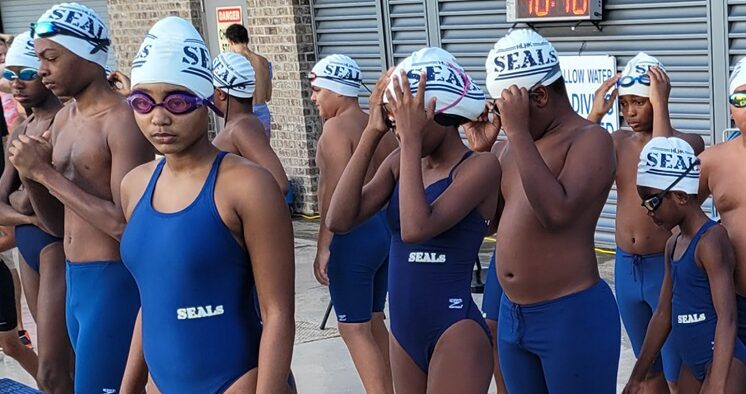 On a late November evening, when most metro Atlanta students are inside their bedrooms napping or completing homework, the swimmers of Healthy Lifestyle, Healthy Kids are nestled into a spacious swimming pool at Beulah Missionary Baptist Church, completing lap after lap.

As one of the team’s coaches, Brandon Little, a former Florida A&M University team swimmer, offers quick corrections to form and demands for faster kicks. Team parent Gwendolyn Franklin excitedly looks on at the progress being made.

In a youth-based sports world dominated by football and basketball, Franklin notes that the year-round swim program, which she and her daughter Trinity have been members of for nine years, is a welcomed breath of fresh air.

“It’s rigorous work, but it keeps them very active and keeps us coming back,” Franklin said. “The coaches do incredible work … Jabari’s created something really amazing.”

The Dekalb County-based nonprofit, which also offers programs for basketball and soccer, is younger than some of the swimmers on the team. Founded in 2008 by Jabari King, a Dekalb native who began his swimming career with the City of Atlanta Dolphins in the early 1990s with Little. He then transitioned onto a spot with Howard University, the longest-running and only active HBCU swim team.

King created the organization after finding his passion for coaching reignited after working with Dekalb youth basketball teams in the mid-2000s. After leaving his job at Georgia Power as an engineer, King started his program with his own children as his first students. His daughter Pilar is now the current state championship for girls’ 100m backstroke in the 13-14 age group.

Although struggling at first to keep their heads above water, HLHK has quickly gained a strong reputation among the Atlanta swim community as a steadily growing, but dedicated group of competitive swimmers.

“We have been doing well through word of mouth,” said King, who also serves as the program’s head coach and creative director. “The kids come and show interest, and we just try to get them to the door. We build them up from whatever level they come in at, which is usually the beginning.”

Many of the students who start off taking swimming lessons from King and his instructors typically end up making the transition to HLHK’s year-round swim team, which consists of swimmers ages 7 to 17.

HLHK has the distinction of being one of the few predominantly African American year-round swim teams in Georgia.

“They are still rare to find. I think just having a program that where you have high standards and you are able to reach out to the community is important,” King said. “I hope that we are able to teach the kids that they are able to accomplish anything that they want to in life.”

“It’s very important to have that representation and for the kids to see themselves in what they do, and I really love it,” Franklin said. “It’s excellent and it really keeps me here as well.”

The program consists of a strict curriculum, including weekday morning and evening practices that typically average 20 hours a week, as well as swim meets that occur some weekends throughout the year.

The coaches pride themselves in making sure that the opportunity to strengthen their swimmers goes on without a hitch, rain or shine. During the COVID-19 pandemic, when many children spent their summers isolated in their homes and without structured activities, HLHK developed a new practice system to keep the kids safe while making sure that they did not lose their speed in the water, according to King.

“We were swimming in lakes and ponds and backyard pools, but we were still able to keep going no matter what,” he says.

Most trainings are focused on building up technique, endurance and speed in the water, as well as building muscle and strength in the weight room. Despite occasional laughs and breaks during practice, a majority of the time is focused on the swimmers working to break their previous times and adhering to the critiques of King and Little.

“It’s a lot of technique work, lot of stretches,” Little said. “In all of my years of coaching, I’ve never done the same workout twice. For the most part, the workouts are going to challenge the body, challenge them do to something that the athlete can overcome when their body is telling them that they are tired.”

“The practices can be hard, some of them make me want to go home, but I know that at the end the coaches really care about me and want us all to do better,” said 15-year-old Trinity Zachary, a multi-state freestyle champion who has been with HLHK since the age of six. “And its not just all about learning swimming, they teach us about a lot of life experience, street smart things in a way.”

For many of the young swimmers, the program has provided not only techniques for the pool and the real world, but also an extended family that they will have for the rest of their lives.

“The coaches are always checking in on us all the time, whether it’s helping us with homework and providing us mental health days, to make sure that we stay active and busy,” said Kala M. Berry, a 16- year-old team member who holds the title of being HLHK’s first state championship swimmer. “This experience, the bond that we have is something that I don’t think that you could ever be built anywhere else.”

A bond so strong that King is now seeing many of his former pupils return to play the role of teacher for some of the swimmers who have taken their place in the lap pool.

“It’s great to see some of the former swimmers come out and work with the newer members,” King said. “They’ve gone through the ups and downs, they know what it takes to put forth a good performance, and how to achieve and accomplish. My biggest goal is creating a new generation of coaches who can come in and keep the pattern going when I am ready to retire.”

And while King does not see himself hanging up his whistle anytime soon, he and his coaches hope that the organization will continue to bring in new students that will help inspire a whole new wave of Dekalb swimmers.

“Nobody’s going to love on your kids more than HLHK,” Little said. “Sometimes that love is tough love … but parents, teachers, community activists can tell you that this is the best place for a kid to go.”

This story was provided by Decaturish.com partner WABE.