The top Decaturish.com stories and photos of 2022

The top Decaturish.com stories and photos of 2022 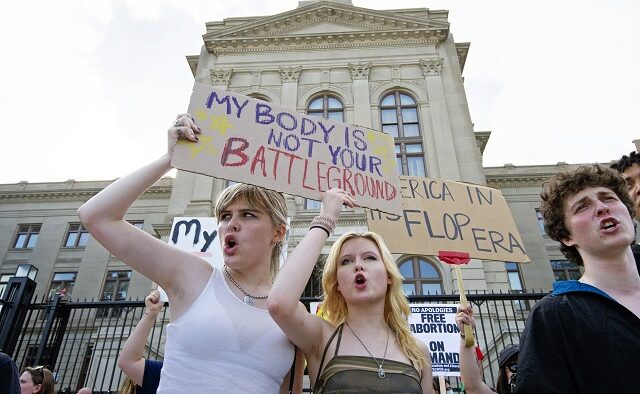 Decatur, GA — Decaturish concluded a successful ninth year in business in 2022 and our team is looking forward to marking a decade of serving our community next year.

Thanks to the support of our nearly 2,000 paying subscribers, we’ve been able to cover our community like no other publication can. Here are the top stories and photos published by Decaturish in 2022.

A few of our stories became statewide and national news, but few outlets who found their “inspiration” in our reporting have credited our team’s hard work. We hope that will change in 2023. 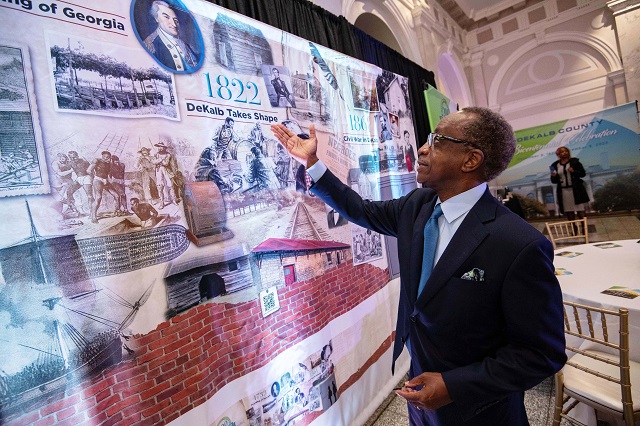 DeKalb County CEO Michael Thurmond points to the county’s namesake-Baron Johann de Kalb, pictured on a mural rendering unveiled during the DeKalb County Bicentennial Celebration Kick-Off at the Historic DeKalb County Courthouse on Friday, Dec. 9, 2022. The mural showing DeKalb’s history from prehistoric to modern times will go outside the county’s Maloof Auditorium in the city of Decatur. Photo by Dean Hesse. 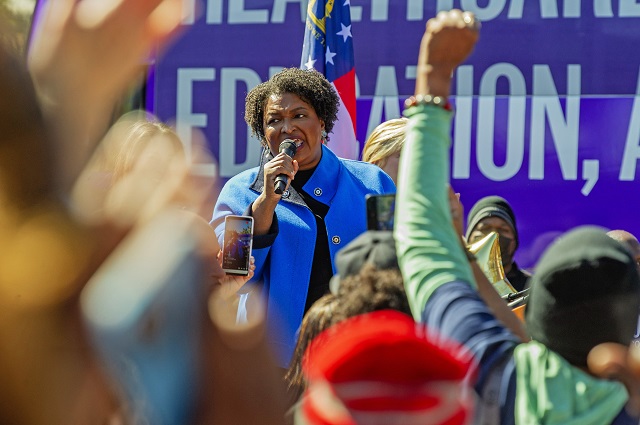 Democratic gubernatorial candidate Stacey Abrams speaks during the “Let’s Get It Done” Early Vote Bus Tour stop in the city of Stone Mountain on Saturday, Oct. 22, 2022. Photo by Dean Hesse. 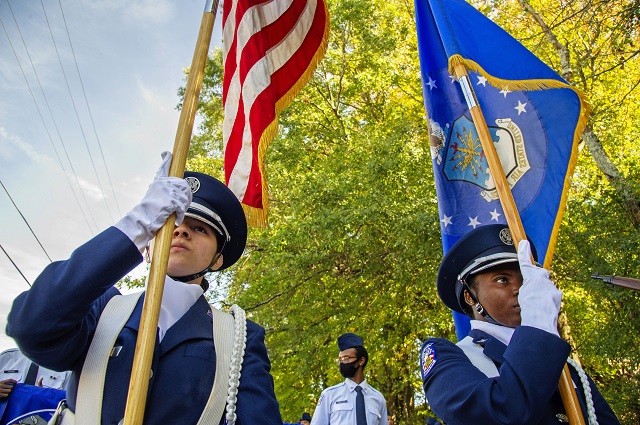 Cadets Martinez and Bawili from AFJROTC Color Guard wait in the staging area for the start of Tucker High School’s Homecoming Parade on Friday, Oct. 21, 2022. Photo by Dean Hesse. 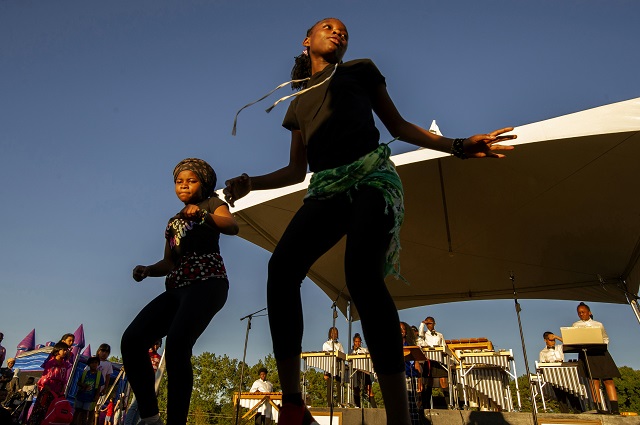 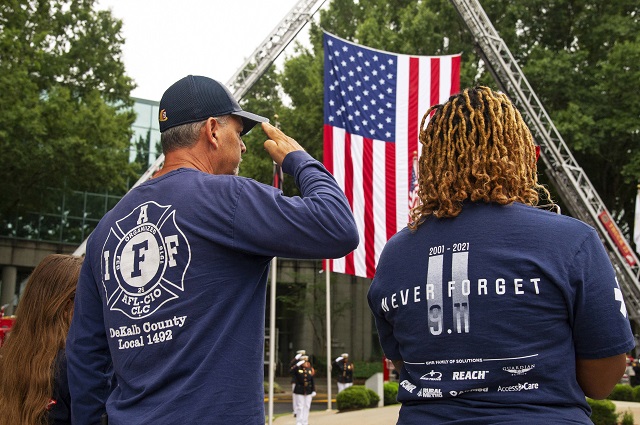 Retired DeKalb Fire Rescue Captain Thomas Dyer with his daughter Cassidy at his side, salutes during the annual 9/11 Memorial Remembrance Ceremony at DeKalb County Fire Rescue and Police Headquarters in Tucker on Sunday, Sept. 11, 2022. Photo by Dean Hesse. 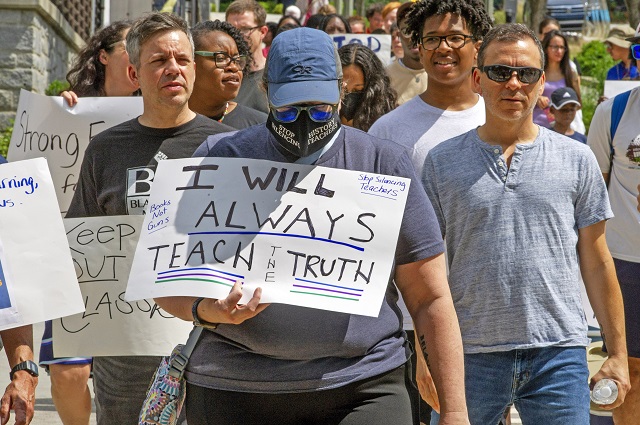 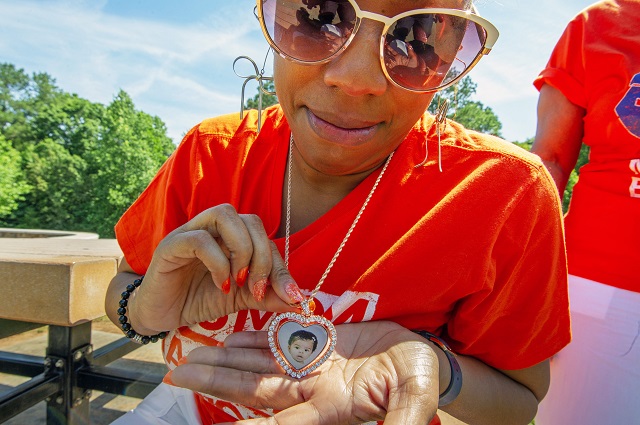 During a Moms Demand Action event at Yellow River Park in Stone Mountain on Sunday, June 5, 2022, Lisa Thomas shows a pendant with a photo taken of her daughter Naya Ruffin as a child. Naya was 22 years old when she was killed by gunfire in April 2022 in Indianapolis. She leaves behind a one-year-old daughter. Photo by Dean Hesse. 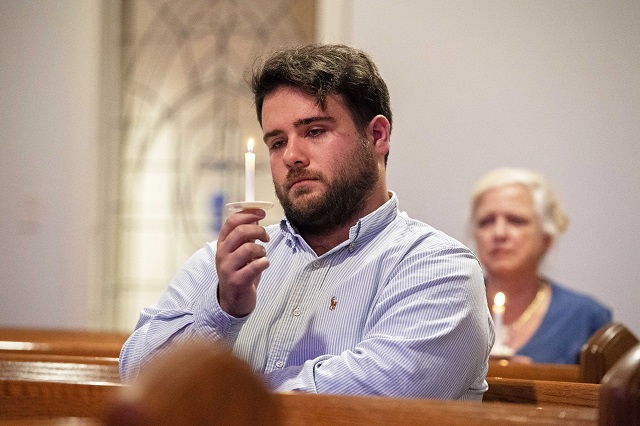 C. J. Lord holds a candle during a prayer vigil at Tucker First United Methodist Church on May 26, 2022, following the mass shooting at Robb Elementary School in Uvalde, Texas that left 19 children and two teachers dead. Photo by Dean Hesse. 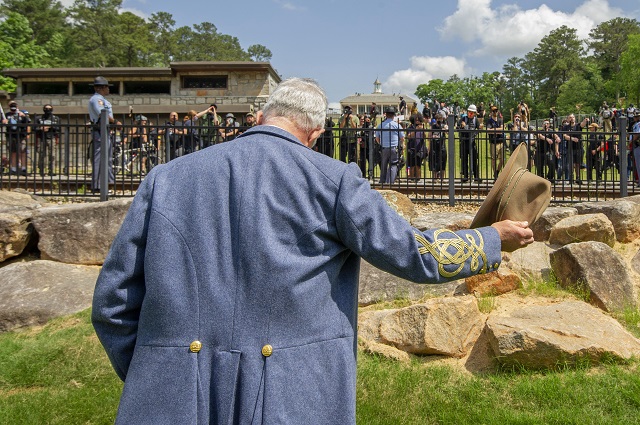 Eric Cleveland, dressed in a replica Confederate officer’s uniform, tips his hat toward protestors during Confederate Memorial Day observances being held by the Sons of Confederate Veterans at Stone Mountain Park on Saturday, April 30, 2022. Photo by Dean Hesse. 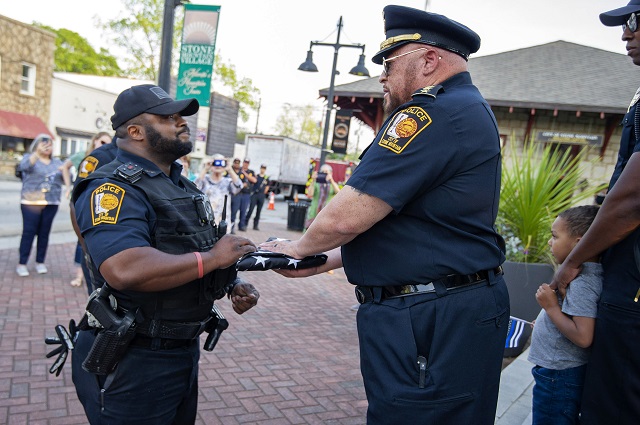 Officer F. Whitehead presents a flag to retiring Stone Mountain Chief of Police Chancey Troutman during a ceremony honoring Troutman’s 35 years of service to the city on Thursday, April 28, 2022. Photo by Dean Hesse. 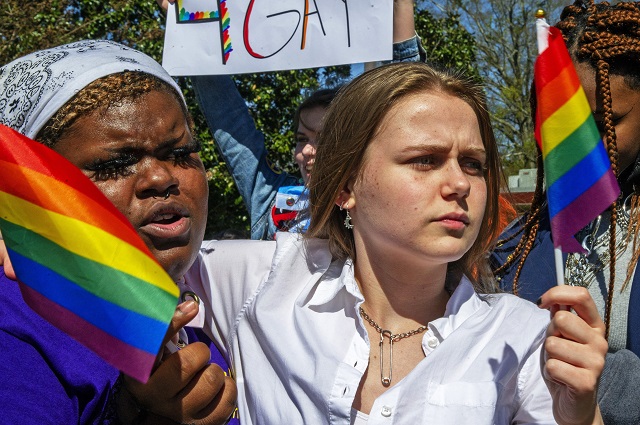 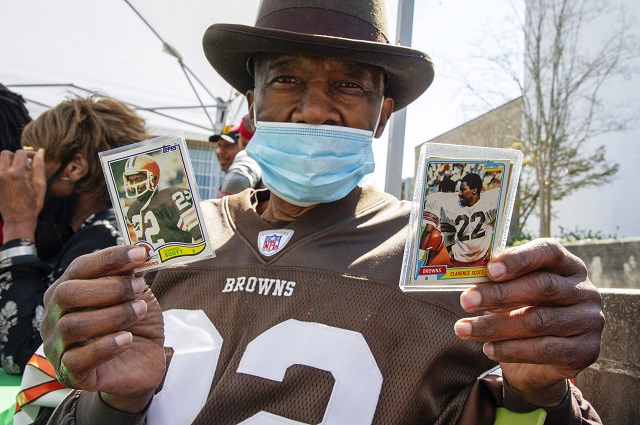 Beacon Hill elder Clarence Scott who played 13 seasons in the NFL for the Cleveland Browns from 1971-1983, shows trading cards from his time in the game during the first installment of the Beacon Hill Concert Series in Decatur on Sunday, March 27, 2022. Photo by Dean Hesse. 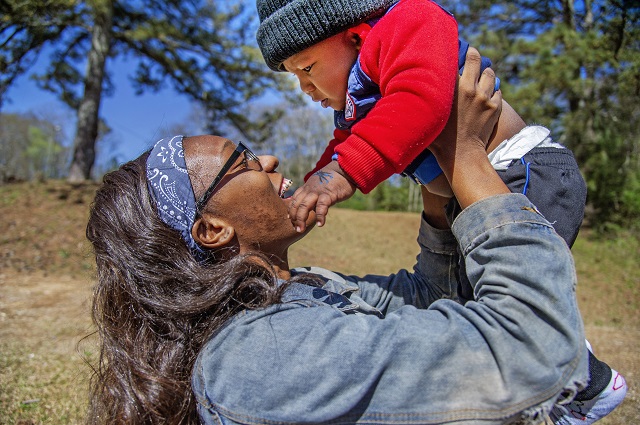 Yasmine Brooks with her son Rico. “My son has retinoblastoma. Stage D in his right eye, Stage C in his left eye.” Brooks said. “It’s a progressive cancer, hereditary or nonhereditary. His is nonhereditary. There’s a lot of chemo. The process is very long. Its’s a lot of what if’s and what not’s but for the most part, he’s a very happy baby. Anybody that knows him, they love him, and I love him.” Photo by Dean Hesse. 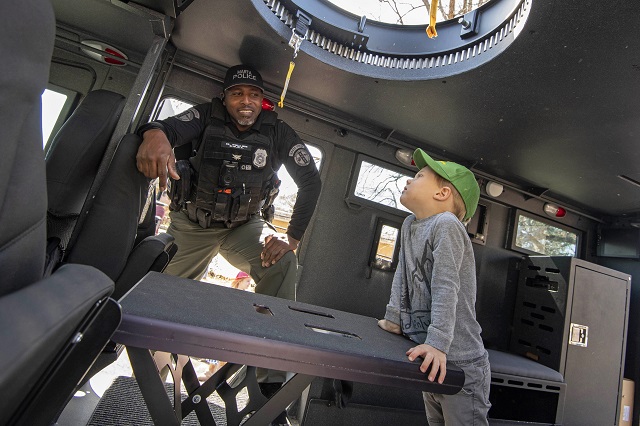 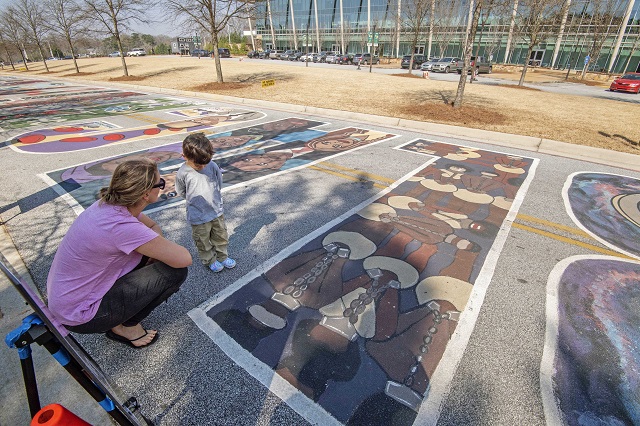 Hannah Page, Director of Research, Data, and Analytics at Drew Charter School and her son Zain, 4, look over the “Black Lives Matter: Stronger Together” mural during a dedication ceremony at the school’s campus in Atlanta on Saturday, March 5, 2022. Photo by Dean Hesse. 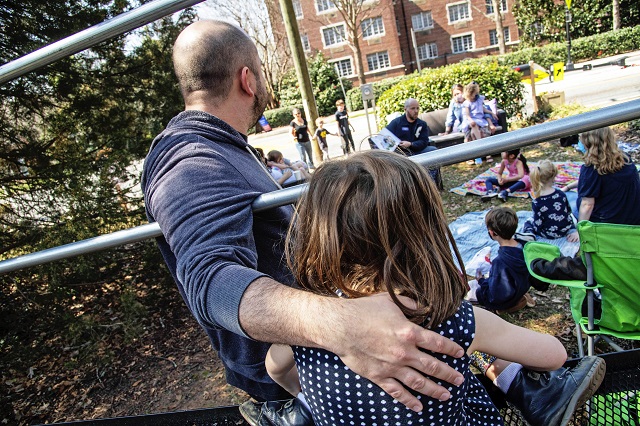 Families and their children listen while E. R. Anderson reads during the gender-creative story time event hosted by the Oakhurst Elementary PTA Diversity, Equity and Inclusion committee and Charis Books and More in Decatur on Saturday, March 5. Photo by Dean Hesse. 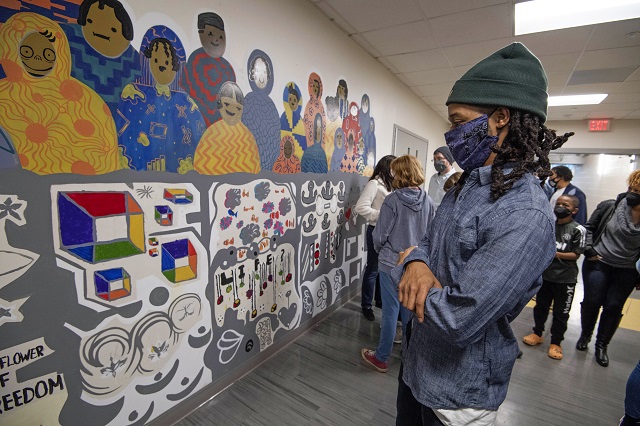 Artist Jamaali Roberts looks over the MLK Mural at Carl G. Renfroe Middle School in Decatur after its unveiling on Monday, Feb. 28, 2022. Photo by Dean Hesse. 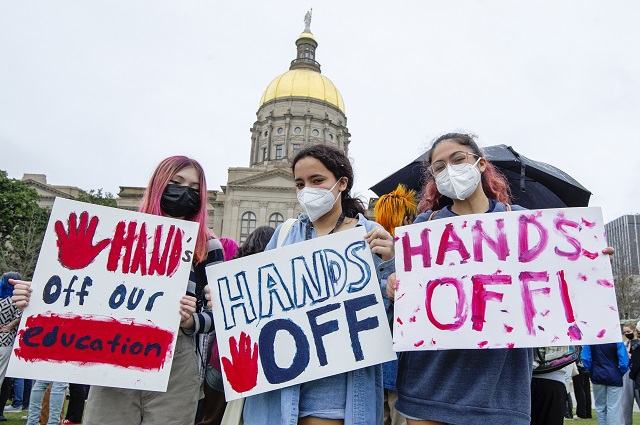 Students hold signs during the Hands Off Georgia protest in opposition of HB 1084 and SB 377 at Liberty Plaza across from the Georgia State Capitol on Friday, Feb. 25, 2022. Photo by Dean Hesse. 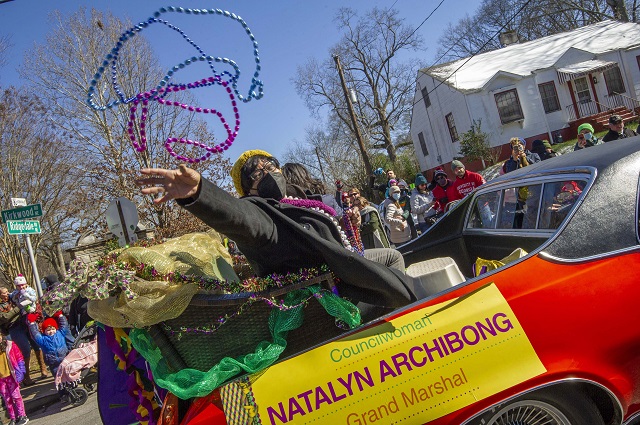