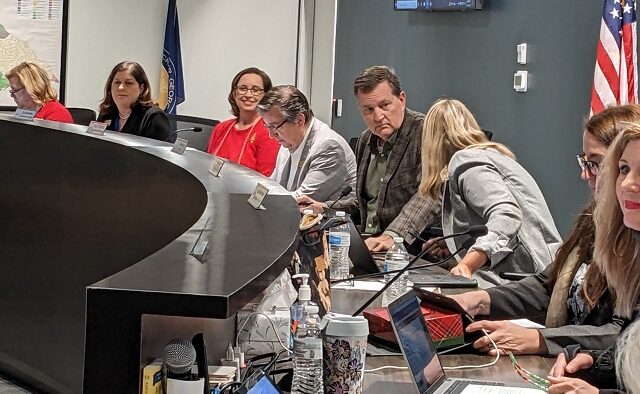 This decision follows 75% of Tucker residents voting on Nov. 8 to support the city creating a public works department to carry out those functions. Both agreements will end June 30, 2023.

As another preparation for Tucker’s future public works department, the city amended an existing contract with InterDev to add creation of a database of road and stormwater systems in the city. The work will commence on January 2, 2023 and end on June 30th, 2023. The city of Tucker will pay InterDev $59,723.

“The goal of this project is to create a centralized GIS [Geographical Information System] database for the city’s assets,” said Chris Rice, InterDev’s GIS Director of Solutions and Technology. “This database will allow the city to hit the ground running when it comes time to do public works.”

In response to a question from Councilmember Alexis Weaver, Rice said that InterDev would primarily use existing data from sources like DeKalb County and the state of Georgia, but that the company was prepared to gather information in the field if it doesn’t already exist.

Also anticipating future public works projects, the city council passed an ordinance that will allow the city to sell otherwise unusable parcels of land to adjoining landowners. City attorney Ted Baggett said at the council’s November meeting that the ordinance adopts a section of state code. After a construction project changes the uses of a parcel of land belonging to the city, Tucker will be able to sell portions that are unnecessary e.

City engineer Ken Hildebrandt recommended that the city enter into contracts with 15 firms for on-call engineering services. Hildebrandt stated that the city anticipates many new projects over the next few years, and having established contractual relationships will allow projects to move forward more quickly. No costs will be incurred by the city until specific contracts for projects are awarded.

— Hildebrandt stated that he will be awarding a task order to KAIZEN Collaborative to develop a concept design for the segment of the Tucker Trail that will run from Lawrenceville Highway to Peters Park along South Fork Peachtree Creek. The contract is in the amount of $27,000.

— The council began the meeting with a discussion of whether to excuse Noelle Monferdini for her absence from the November meeting. The Tucker city charter states that if a city council member has two unexcused absences in a 90-day period, they forfeit their office. Monfordini was on vacation during the November meeting.

Mayor Frank Auman said that Tucker’s charter was comparatively Draconian, and he and other city council members expressed concern that the policy could be weaponized. On the other hand, Auman said that he and others were able to plan vacations around the meetings. He added that he felt that the city should alter the charter to allow for steps before forfeiture of office, but that the city would have to present changes to the legislature.

The council voted 4-to-2 to excuse Monferdini’s absence.

— The council conducted first reads on several ordinances. A modification of the Special Land Use Permit for the Chik-fil-A at 4435 Hugh Howell Road and 2239 Dillard Street will allow for the installation of a drive-through at the location. The property owner is asking for the removal of a requirement for a dedicated right-of-way for the city as part of a turn lane on Rosser Terrace.

“This modification is not ideal, but removal of the right-of-way will not have a major impact,” said Community Development Director Courtney Smith.

Jennifer Santelli, a senior development supervisor for Chik-fil-A, stated that the requirement would mean the company would have to create a right-of-way along property it did not own.

“At some time in the future that adjacent property is likely to come up for redevelopment, and at that point it will be appropriate for them to donate right-of-way and close the curb cut,” said Santelli.

— A proposed ordinance change would modify Tucker’s construction code to remove a requirement for steel or masonry construction of buildings that are more than three stories in height or 100,000 square feet in area, as long as the more effective National Fire Protection Association 13 or 13R sprinklers are used. This change would bring the ordinance into compliance with state law, and will be on the agenda for the Tucker city council’s January meeting. The council passed a resolution referring the changes to the Georgia Department of Community Affairs.

Baggett, the city attorney, stated in a response to council member Monferdini that the city could modify those rules for a particular area by designating it as an entertainment district, as well as grant variances to specific applications.

— The city changed an ordinance concerning hotel and motel taxes so that no taxes will be collected on stays for people who were displaced by fire. This change brings the ordinance into compliance with state law.

— The council voted to reappoint Stephen W. Nicholas as the Chief Judge of the Municipal Court of the City of Tucker.

— The council voted to renew a contract for legislative consultant services with ConnectSouthLLC, at $5,000 per month.