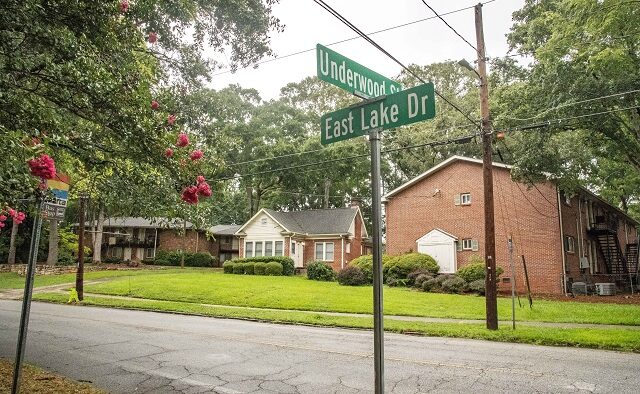 Decatur, GA — Wellroot is relocating 14 young adults into the Oakhurst community at 750 E. Lake Drive. Residents began moving in at the property in early November.

One of Wellroot’s programs supports youth, ages 18-24, who age out of foster care, which is the program that’s moving to the Oakhurst area.

“Most of us, myself included, aren’t quite ready to be fully on our own at 18 years old, so the young person aging out of foster care and leaving their foster parents might not have a family to support them. We have a program that supports them through that transition, and it’s a residential program,” Wellroot Chief Executive Officer Allison Ashe said.

The youth reside with Wellroot in apartments and the agency provides wraparound support. There will also be live-in adult supervision on site at all times.

Wellroot also has a family housing program and hopes to also provide housing for this program as well at 750 E. Lake Drive in the future. There are 15 units at the complex, so Wellroot will ultimately be able to house up to 30 people.

Wellroot is a faith-centered family services organization that offers programs related to foster care, transitional and independent living, and family housing. It is an agency of the North Georgia Conference of the United Methodist Church. Wellroot serves over 200 children in the foster care system every year. The agency was called the United Methodist Children’s Home until December 2018.

Wellroot was previously located off South Columbia Drive in Decatur on the property that is now known as Legacy Park. The city of Decatur bought the property in 2017 for $40 million. The city and the Decatur Housing Authority are currently working on building the South Housing Village at Legacy Park, which will be 132 units of affordable housing.

When the United Methodist Children’s Home sold the property, the young people in the programs were moved into apartments throughout the greater community. The leases have expired.

The new residents are all relocating from an existing facility in the Tucker and Stone Mountain area. Most of them are finishing their high school studies within the DeKalb County School District or completing their GED. Several residents plan to apply and hope to work for nearby Oakhurst businesses.

Many of Wellroot’s services are offered at its Tucker offices, such as tutors, recreational therapy, vocational training, support, and resume writing classes.

At 750 E. Lake Drive, Wellroot will offer services focused on life skills, such as laundry and cooking classes.

“We help them make that transition into being a young adult and being able to live on their own,” Ashe said.

“We absolutely plan to keep this location affordable, as we are big supporters of affordable housing, creating community, and lifting up those in need,” she previously said. “We do have a primary targeted population for this location, which is those young adults and possibly families who are in our programs.”

Ashe has also said the young people in the program would benefit from being in a community like Oakhurst.

“We felt like we could provide them a more loving and nurturing environment if we owned an apartment community when we can house them more close together as opposed to spread across a larger community, and really a place that’s very family oriented, has employment opportunities nearby, has public transportation nearby so that they can get to school or to work easily,” she said.

She later told Decaturish that two of the young people living in the apartments have recently gotten jobs at local Oakhurst businesses.

The housing will be a mix of rentals and subsidized housing.

“For those young adults in our transitional living program, Wellroot does receive money from the state of Georgia to house them,” Ashe previously said. “Others in different scenarios might be paying a very modest amount of rent.”

Over the past few weeks, repairs and renovations have been ongoing to bring the property up to code. The renovations include new roofs and gutters, redoing the electrical system, as well as internal upgrades.

Wellroot also has some plans for rather significant aesthetic and amenity improvements.

“We’re really hoping to make it a beautiful asset to the Oakhurst community and for the people that reside with us on the property,” Ashe said.

Wellroot will be fundraising over the next several months to finish the renovations and is working to price out the cost of the phase two renovations. Grants have been secured for most of that work.

Phase two renovations will focus on aesthetic improvements, such as liming the brick and upgrading the interior of the units.

“We are hoping to build behind the house an extension on the house where we can have both a community room and some laundry facilities,” Ashe said. “The original apartment was built back in the 50s, so there are no laundry hookups in the apartments, and we’d like to have laundry on the property so that the young people and the families that live there don’t have to go to the laundromat down the street.”

Wellroot has limited the number of residents to 14 for now, as the renovations are ongoing. There are two apartment buildings on the property.

Once the renovations are finished, Wellroot should be able to fully occupy both buildings. 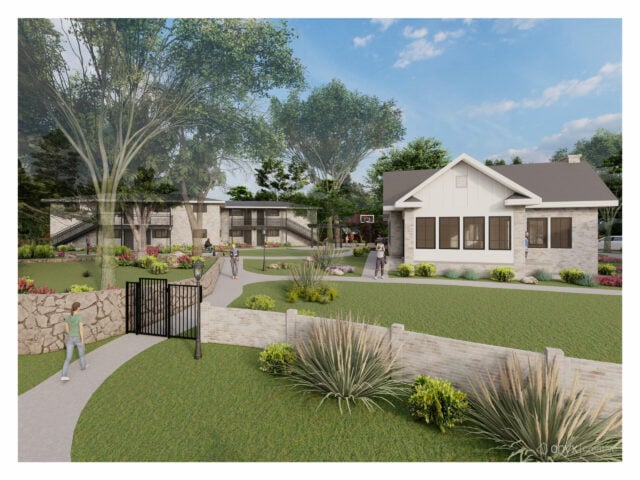 A rendering of 750 E. Lake Drive shows what the property will look like once renovations are completed. Photo courtesy of Wellroot Family Services.

The Braden Fellman company owned the property from 2019 until about June 2022. Wellroot Family Services purchased the property. Residents were notified on Aug. 1 that they had to be out of their apartments by Sept. 9. Ashe previously told Decaturish that the short notice was due to an internal communications error.

“The original time frame of the notice was an internal communications error, as we were simply too eager to move forward, and we regret that,” she said. “We immediately reached out to all six impacted residents to make this right as soon as we realized it and make the transition as smooth as possible. Move-out dates have been extended to accommodate individual resident needs.”

Wellroot was also in the process of reaching out to residents over the summer to offer them $1,000 each to help with moving expenses.

Residents were given extensions to move out, and all had moved by Oct. 1. Ashe previously said that Wellroot planned to accommodate requests from residents for more time.

To advertise with Decaturish, click here or email [email protected]urish.com