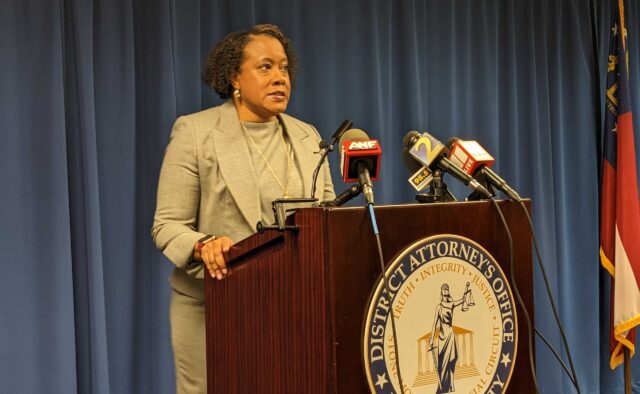 DeKalb County District Attorney Sherry Boston, during a press conference on Jan. 25, announced she will recuse herself from the investigation of an officer involved shooting at the future Atlanta Public Safety Training Center site. Photo by Dan Whisenhunt.
Share

Her office has requested an independent prosecution agency be appointed. She said there’s no conflict of interest in the case, but she believes a recusal is the best course of action because of her agency’s connection to a task force tasked with clearing activists from the site of a future police training center.

“The overarching reasoning for my recusal is that it is simply the right thing to do,” Boston said during a press conference on Jan. 25. “It avoids the appearance of any impropriety and is consistent with the mission of my office and our efforts to instill community trust and confidence in our criminal justice system.”

On Jan. 18, a police officer shot and killed Manuel “Tortuguita” Esteban Paez Teran, 26, near the site of an 85-acre police/fire training facility located in DeKalb County’s South River Forest. Activists have dubbed the training facility “Cop City.” A State Trooper was also shot and wounded during the confrontation. Teran is accused of shooting the trooper with a gun purchased in 2020. There is no body camera footage of the incident, and the trooper has not been identified. Boston’s office is part of a multi-jurisdictional group of law enforcement agencies working to remove activists from the site.

According to the DA’s office, the multi-jurisdictional task force is responsible for “investigating and prosecuting acts of domestic terrorism and related charges occurring in and around the future site of the training center.” The task force members are: GBI — the agency investigating Teran’s death —  the Atlanta Police Department, the FBI, the Georgia Attorney General’s Office, the DeKalb County Police Department, the DeKalb County District Attorney’s Office, the Georgia State Patrol, and the Department of Natural Resources.

Typically, the GBI investigates when an officer shoots someone and turns those findings over to the local District Attorney. The GBI is still investigating Teran’s shooting. Decaturish asked Bostion if she thinks the GBI can remain objective in the case when it also belongs to the task force.

“That is a question for the GBI,” Boston said. “… But what I can say is our roles in officer involved shootings are very different. The GBI is tasked with the collection of evidence. The prosecuting agency is tasked with making a decision as to whether charges are warranted or whether the shooting was justified. So we have two very different roles, and I’m looking solely at the role the prosecution agency plays in this investigation.”

Decaturish asked a GBI spokesperson whether the agency should recuse itself from this investigation. The GBI announced that it intends to continue investigating Teran’s death. For the full story, click here.

The Cop City controversy, and the shooting of Teran, has become the subject of international attention and the impetus for numerous protests. The tension around the training center escalated in December when police rounded up activists and charged them with domestic terrorism.

Boston made it clear that she intends to remain involved in those cases.

“The only recusal we are making today is specifically related to the officer involved shooting,” Boston said during a press conference on Jan. 25.

Decaturish asked Boston whether she felt the domestic terrorism charges against the activists escalated the stand-off between activists and police over the police training center.

“I can’t speak to the motivations of anyone under these circumstances. All I can say is that we will continue to follow the law and the evidence and facts as we see them and make appropriate charges,” Boston said.

Another media outlet asked if Boston’s recusal would encourage activists to double down on their activities at the site and “commit more acts of violence.”

The reporter asked, “Do you fear that this might send the wrong message to the agitators?”

Boston said she did not.

“Actually just the opposite,” Boston said. “I hope that what this instills with protesters on the ground is that this will get a full, fair, impartial and independent look, which I think is important for our community and for everyone that is mourning the death of Manuel.”

On January 24, 2023, DA Boston filed formal notice with the Prosecuting Attorney’s Council of Georgia of her recusal decision and requested the appointment of an independent prosecuting agency, a press release from the District Attorney’s Office said.

A recent protest in Atlanta over the shooting made headlines around the world. Activists and demonstrators met peacefully at Underground Atlanta on Saturday afternoon, but a smaller group of demonstrators smashed windows and torched a police car.

Like activists arrested at the training center site, the people arrested in Atlanta are facing numerous charges, including domestic terrorism, which is a felony.