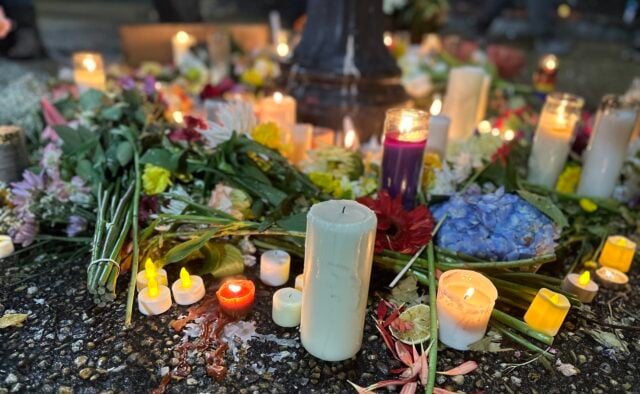 A candlelight vigil to rembmer Tortuguita, the forest defender who was killed by law enforcement, was held on Wednesday, Jan. 18, 2023 in Little Five Points. Photo courtesy of Stop Cop City ATL.
Share

Atlanta, GA — About 300 people gathered for a vigil in Little Five Points to remember Tortuguita, the forest defender who was killed by law enforcement on Wednesday, Jan. 18.

The Georgia Bureau of Investigation identified the man who died in the officer-involved shooting as Manuel Esteban Paez Teran, 26.

According to police, a protestor and a Georgia State Trooper exchanged gunfire as police cleared the site of the future police training center, an 85-acre police/fire training facility located in DeKalb County’s South River Forest. Activists call it “Cop City.” The officer received a gunshot wound, but is expected to survive. The activist died, and several others on the scene were arrested.

The GBI is investigating the shooting.

“At about 9 a.m. today, as law enforcement was moving through the property, officers located a man inside a tent in the woods,” the GBI said in a press release on Jan. 18. “Officers gave verbal commands to the man, who did not comply and shot a Georgia State Patrol Trooper. Other law enforcement officers returned fire, hitting the man. Law enforcement evacuated the Trooper to a safe area. The man died on scene. The injured Georgia State Patrol Trooper was taken to a local hospital, where he underwent surgery. A handgun and shell casings were located at the scene. The GBI is working the officer involved shooting and the investigation is still active and ongoing.”

Several people were arrested and taken to the DeKalb County Jail during the operation. This morning, Jan. 19, the Atlanta Journal Constitution reported that five arrested by GBI on Wednesday are facing “domestic terrorism” charges, though the people arrested on Wednesday haven’t been identified.

The GBI said on Thursday that during the operation, about 25 campsites were located and removed, according to a press release. The GBI also said the following individuals were arrested and charged with domestic terrorism and criminal trespass:

On Jan. 19, the Georgia Department of Public Safety said in a press release it will not be releasing the name of the officer involved in the shooting to not compromise security against criminal or terroristic acts due to retaliation.

“Nondisclosure of the Troopers name is necessary for the protection of life, safety, and public property. The Department will provide an update on the Trooper’s status when it becomes available, but we continue to ask you to pray for his recovery,” the press release states.

According to a press release from Stop Cop City ATL, people mourned Tortuguita’s death and supported each other.  People sang, played guitar, and marched in the streets shouting “No justice, no peace” and “Stop Cop City.”

“They spent their time between Atlanta, defending the forest from destruction and coordinating mutual aid for the movement, and Florida where they helped build housing in low income communities hit hardest by the hurricane,” an Instagram post from Stop Cop City states. “They were a trained medic, a loving partner, a dear friend, a brave soul, and so much more. In Tort’s name, we continue to fight to protect the forest and stop cop city with love, rage, and a commitment to each other’s safety and well-being.”

A post shared by Defend the Atlanta Forest (@defendatlantaforest)

ATLANTA — About 300 people gathered at Little 5 Points in remembrance of Tortuguita (tor-too-ghee-tah), the forest defender who was shot and killed by the police on Wednesday, January 18. Organizers are outraged at the police killing of yet another person of color.

People mourned, cried, and supported each other. They reaffirmed their commitment to public safety free of police and Cop City. People sang, played guitar, and then marched in the streets shouting “No justice, no peace” and “Stop Cop City”.

Organizers are receiving an outpouring of support from across the country. There were vigils for Tortuguita in Asheville, Durham, Olympia, Detroit, Los Angeles, Chicago, New York, Savannah, and Portland, with more planned for this evening and this weekend.

People who knew Tortuguita are devastated by the loss. A post on @stopcopcity reads: “They spent their time between Atlanta, defending the forest from destruction and coordinating mutual aid for the movement, and Florida where they helped build housing in low income communities hit hardest by the hurricane. They were a trained medic, a loving partner, a dear friend, a brave soul, and so much more. In Tort’s name, we continue to fight to protect the forest and stop cop city with love, rage, and a commitment to each other’s safety and well-being.”

Tortuguita was a very active part of supporting material needs for the community and people in the forest. In Tallahassee, they were a part of Food Not Bombs, a food distribution organization. In Atlanta, they ran the mutual aid account @browncatmutualaid, which raised thousands of dollars to meet the material needs of people of color and people who were defending the forest. One person reached out saying: “When I was going through some things late last year, this person was always willing to share the posts I made and even made donations periodically. They would reach out asking how I’m doing and if I needed help. I, in turn, would share mutual aid requests for forest defenders.”

A friend of theirs said: “Tortuguita was a very kind person. They were always willing to help and take care people in need around them, especially the qtbipoc community. They were always attentive to others needs and offer always the best of them. A truly warriors for the forest and the people! I miss them so much.”

A fellow forest defender offered the quote: “Tortuguita showed an incredible amount of passion toward collective struggles for liberation and freedom. This passion was informed by their strong commitment to critical thought and inquiry. During their many months in the Weelaunee Forest, Tort could often be found in deep discussions about radical history, theory, and how we move together in this movement.

Tort was an instant friend to many, and touched countless lives with love and kindness in their tragically short life. Their ideas live on in our actions, and their friendship lives on in our hearts. Rest in power, Tort.”