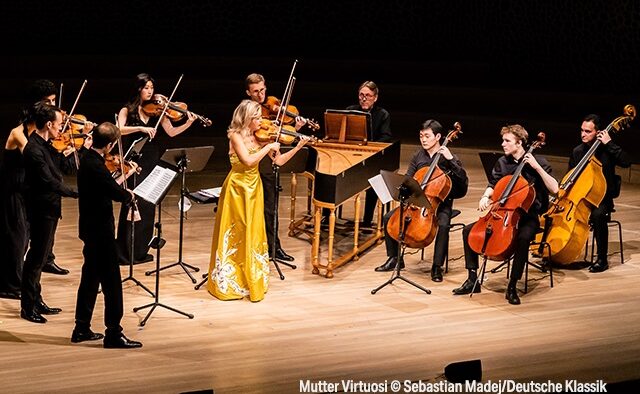 In February, Atlanta’s classical music lovers are in for a treat as the Mutter Virtuosi makes its second-ever visit to North America with their founder and mentor, renowned violinist Anne-Sophie Mutter.  The seven-city tour includes a return to Atlanta’s Schwartz Center for Performing Arts where Mutter and the Virtuosi first visited in 2014. The celebratory concert on Thursday, February 2, at 8 p.m. hails 20 years from the opening month of the Schwartz Center for Performing Arts at Emory University.

From Vivaldi’s “The Four Seasons” to an Atlanta premiere by composer Unsuk Chin, Anne-Sophie Mutter has selected a wide-ranging program of string orchestra concertos from both familiar and less well-known composers. Representing the Baroque and Classical periods are Antonio Vivaldi and Joseph Bologne, the Chevalier de Saint-Georges, while contemporary work includes Gran Cadenza, commissioned for the Virtuosi from South Korean Composer Unsuk Chin (b. 1961).

Relatively unknown to many audiences today, Joseph Bologne, the Chevalier de Saint-Georges, was a violin prodigy and composer in the mid-to-late 18th century. He conducted the premieres of Haydn’s six “Paris” symphonies, performed the concertos he composed to great acclaim, and was friendly with fellow musicians of his time, including Mozart and Gluck. While much of Bologne’s output remains less than familiar today, Mutter remains committed to performing great music from composers that history and circumstance may have set aside. She performs his Violin Concerto No. 5 in each tour city. “I am excited to bring such a diverse program to some of my favorite venues,” said Anne-Sophie Mutter. “Together we will embark on a journey from the past to the future of music—may ‘the Force’ be with us all.”

Anne-Sophie Mutter is also firmly dedicated to expanding the string repertoire with music from her own time, and her commission of Unsuk Chin’s Gran Cadenza is for two solo violins and chamber orchestra. Mutter plays the first solo part and two members of the Virtuosi—Samuel Nebyu and Nancy Zhou—each play the second solo part in different cities. All seven of the Virtuosi’s violinists—Carla Marrero, Ryan Meehan, Elias Moncado, Nebyu, Mikhail Ovrutsky, Agata Szymczewska, and Zhou—rotate to join Mutter as the complement of soloists in Vivaldi’s Concerto for Four Violins in B minor

As a fixture in the world’s major concert halls, Mutter has made her mark on classical music as a soloist, mentor, and visionary, with the Times, London, naming her “the undisputed queen of violin-playing.” Tickets for the Thursday, February 2 concert are available through the Schwartz Center at schwartz.emory.edu or by calling 404.727.5050.  As part of the 20th anniversary Schwartz Center celebration, concert-goers can arrive early for concessions from Black Bean Coffee and will also enjoy a complimentary champagne toast in honor of the anniversary following the concert.