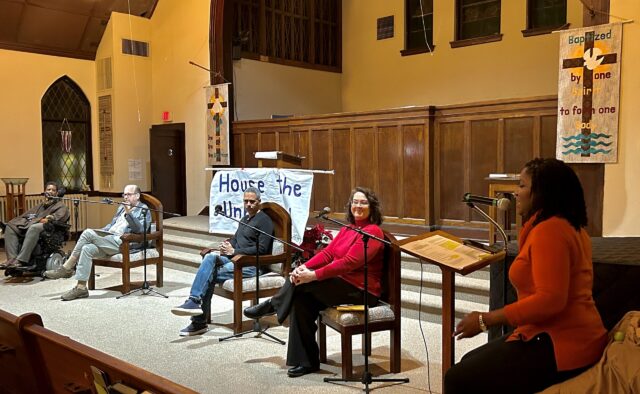 Decatur, GA — The House the Unhoused DeKalb Alliance held a homelessness community forum on Monday, Jan. 9, at Oakhurst Presbyterian Church to talk about some of the root causes of homelessness and ways to address the issue.

Dan Immergluck, a professor of urban studies at Georgia State University, dove into some key decisions made that impact housing. He noted that Atlanta has shifted away from a model of public housing and has primarily moved to housing vouchers.

“That has come home to roost, because we now have a system, in Atlanta especially, built on vouchers and nobody can find a unit that will accept their voucher because the market rents are so much more lucrative and are going up much faster than what HUD will pay for a vouchered rent. Instead of having a stock of dependable public housing, or social housing, we have a voucher based system,” Immergluck said.

In his book, “Red Hot City: Housing, Race, and Exclusion in Twenty-First-Century Atlanta,” he dives into decisions back to the 20th century, additional examples of colonization, and focus on the period from the Olympics forward.

“I point to a few examples, one being the Olympification of the city itself and the move away from place-based public housing in the city, the demolition, the expulsion, the dispossession of folks in those sites, and really another form of colonization,” Immergluck said.

He added that the foreclosure crisis was another period of massive dispossession and a period that saw properties go to private investors.

“There was major transfer of wealth over about a five-year period from Black families, Latinx families, [and] some white families to investors,” Immergluck said.

The panel also discussed the impact of mandatory inclusionary zoning. In Decatur, developers are required to add 10% affordable units at 80% of the area median income if a new development has five or more units or if a redevelopment adds over five units, according to the city’s website.

Immergluck said mandatory inclusionary zoning can help a little bit, but cities should have adopted the mandate before large apartment buildings were built.

Elected officials are doing their jobs, which is to dispossess, said Kamau Franklin, founder of Community Movement Builders, Inc.

He adds this is a struggle around politics.

“I think that we are so low on the totem pole that we don’t even get crumbs,” Simmons said. “I don’t think it will necessarily benefit our community, especially if it’s not specifically defined in it.”

Individuals living with disabilities largely rely on fixed incomes, so their access to affordable housing is almost non-existent, Simmons added.

“I know that all of you have seen the cranes that are on the Atlanta skyline, all of this luxury housing that’s going up. Well, this type of housing is actually pushing individuals with disabilities outside the metro area, away from accessible transportation, away from doctors, their community resources, because of the gentrification that’s going on and taking place,” Simmons said.

She added that if someone finds an affordable place to live, they will stay there because there isn’t another affordable option.

“There’s no shortage of money in any of our governments, any level of government,” she said. “It’s a question of what we’re spending it on.”

Mandatory inclusionary zoning makes some difference. A source of income protection would make an impact, so that people who have a housing voucher could use it at any market rate apartment they would otherwise qualify for, Patenaude said.

The city of Decatur is working to once again allow duplexes, triplexes, and quadplexes in city neighborhoods. Some concerns were raised about the proposal during the forum, including if single-family housing would still be allowed.

“Yes, the ability to build and maintain a single-family home will not change,” City Planner Kristin Allin told Decaturish.

The city commission will take one of two votes on the proposal on Jan. 17.

“I think we need to be very clear up front though that single-family zoning, the way that city of Decatur and other communities require that people can only build single family houses are exclusionary, and they’re based in racist policy,” Patenaude said. “Seeing the city of Decatur try to make some changes is a huge win for housing advocates. It’s not going to build more affordable housing. It’s simply not. But it is going to open up some opportunities that don’t currently exist.”

Immergluck added that Decatur is past gentrification.

“Decatur is an upper income, affluent suburb, and it is going through now super gentrification…meaning the only people who can buy into Decatur in a single-family home are in the top 1%,” Immergluck said.

The proposal will not deliver affordable housing for low-income people, but it will return the opportunity for middle income people to buy into Decatur, he added.