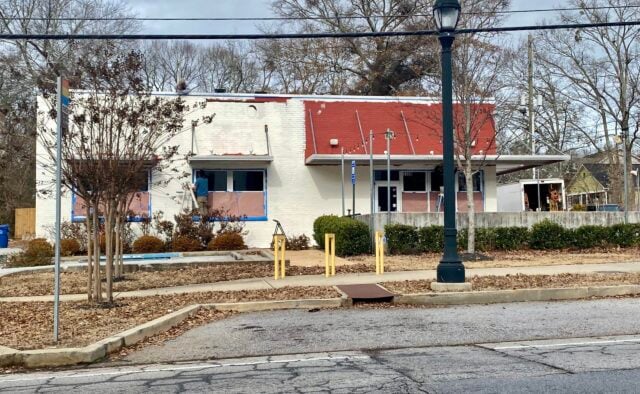 People paint the building at 2358 Hosea Williams Drive on Dec. 30, 2022, to prepare for the opening of La Fonda Latina. Photo by Zoe Seiler.
Share

Atlanta, GA — La Fonda Latina is coming to East Lake. The restaurant will open at 2358 Hosea Williams Drive and is anticipated to open in March.

“We own the building and we really like the area, so when our tenant moved out it was an opportunity to bring La Fonda closer to this side of town,” said Karen Haan of Fellini’s Pizza, La Fonda Latina and The Greater Good Barbecue. “The hours will be posted when we are closer to opening, but we will likely be open from 11 a.m. to 11 p.m.”

She added the menu will be the same as La Fonda’s other locations.

Lake and Oak Barbecue was previously open at 2358 Hosea Williams Drive. The restaurant closed on Sept. 8, 2022, after two years in business in East Lake, according to Eater Atlanta. Chef Joshua Lee previously confirmed the closure in a post to the East Lake Neighbors Facebook page. He didn’t specify the reason for closing, but indicated he and Soulful Company Restaurant Group co-owner chef Todd Richards planned to move forward with a location in the West End, Eater reported.

Before Lake and Oak opened at the location, it was Greater Good Barbecue, which is owned by the same owners of La Fonda and Fellini’s Pizza. Greater Good opened in August 2016 in the development at 2nd Avenue and Hosea Williams. The restaurant closed in December 2019. The East Lake restaurant was the third Greater Good restaurant. The original one opened in Tucker in 2012, and a second location opened in Buckhead in 2013, according to the Atlanta Business Chronicle.