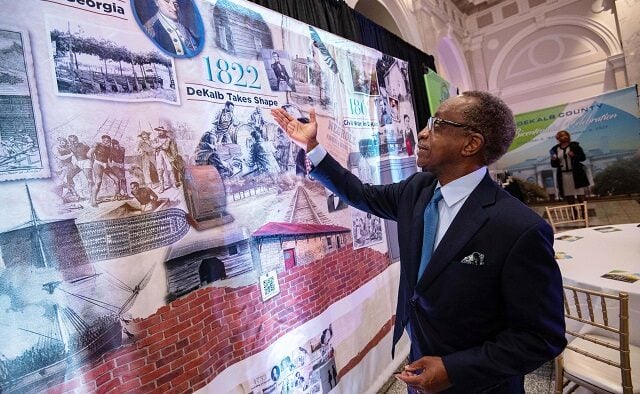 DeKalb County CEO Michael Thurmond gestures toward the county’s namesake-Baron Johann de Kalb, pictured on a mural rendering unveiled during the DeKalb County Bicentennial Celebration Kick-Off at the Historic DeKalb County Courthouse on Friday, Dec. 9, 2022. The mural showing DeKalb’s history from prehistoric to modern times will go outside the county’s Maloof Auditorium in the city of Decatur. Photo by Dean Hesse.
Share

The mural will feature elements of the county’s history dating back to prehistoric times through 2022. The artwork will be 112 feet wide and 16 feet tall.

Design firm Jones Worley is conducting the research and designing the mural. The proposed section of the mural so far depicts Stone Mountain, Native Americans who lived on the land, the Civil War era, and a few iterations of the county courthouse.

Senior Vice President of Marketing Communications for Jones Worley Molly Badgett said some of the biggest challenges with developing the mural are keeping each piece of history in chronological order, since the firm also has vertical space to fill. The other challenge has been determining what photos should be included in the mural.

A rendering of the DeKalb County bicentennial mural shows the proposed section that has been designed. This portion would begin on the side of the Maloof auditorium along Commerce Drive closest to West Trinity Place. Photo courtesy of Jones Worley.

The artwork begins with the beginning of time and prehistoric animals. It also features Stone Mountain and the Native Americans, primarily the Cherokee and Creek tribes, who lived on the land that became DeKalb County, as well as their artifacts.

“One of the first things we wanted to emphasize that is very important for us that those who enjoy and do this mural recognize that we didn’t want to create separate streams of history. In reality, Black and white and Native Americans, we were all here simultaneously. When DeKalb was founded, this was Native American land,” DeKalb CEO Michael Thurmond said.

It then moves to the lottery for land in Georgia, the development of railroads and churches, and the building of the DeKalb County courthouses. The mural will also touch on the Trail of Tears and slavery.

Mary Gay, who wrote about the Civil War, is part of the mural as an acknowledgement of the history and her being a DeKalb County resident. The Junior League of DeKalb, however, recently renamed the Mary Gay House to 716 West. The Junior League recently voted to rename the house as a stern rebuke to the home’s namesake “Confederate heroine.”

“We recognize also that in DeKalb’s family tree we have various and different people and quite frankly we have slaveholders and enslaved people in the DeKalb family tree,” Thurmond said. “Hopefully by the telling of this story we can use it as impetus or encouragement to learn more about these individuals, their strengths, their weaknesses, and to learn from both so that we can build a better future.”

Aspects of the Reconstruction period will be shown too, with the addition of new churches, Scottdale Mill, dairies and quarries and the establishment of schools and universities like Oglethorpe and Emory,

“That era is what we’re calling transitions,” Badgett said. “We have taken certain years and looked at what was going on in those years. We’ve given them titles to ground people in the years, in the decades or periods that we’re showing.”

The mural is still being developed, but it will depict the 200-year history of the county. The county celebrated its 100th anniversary in 1922. To showcase the new visions era, the mural will feature Scott Candler Sr., who was the only commissioner on the board of commissioners from 1939-1955 and was the mayor of Decatur for 17 years. This period also saw the creation of libraries, schools, and the DeKalb Fulton Hospital Authority.

“At the same time, you’ve got things happening in the African American community,” Badgett said. “We’re being very inclusive. That’s really important that we include things like the fact that there was a Lithonia Speedway and then there was a Lithonia Country Club, that was huge for the African American community during the Jim Crow era. They put the area on the map with that, and a lot of people don’t know about it.”

Thurmond added the mural will also focus on the Buford Highway corridor and the city of Clarkston “and the great diversity that is DeKalb County,” Thurmond said.

“We’re focused intently on the Buford Highway corridor, the Hispanic/Latinx community, Clarkston, which is one of the major refugee relocation destinations in America, as well as the growing Asian population,” Thurmond said. “That’s one of the areas that’s still being developed that we’re being sensitive about and very intentional and ensuring that we are representative of our entire population.”

From the 1960s to 2022, the mural will highlight the Civil Rights Movement, the development of transportation, all the county chief executive officers who have served, the Olympics, SPLOST, and the COVID-19 pandemic, among other things.

“It’s part of a vision that I had for our county and for the bicentennial. We’ve been working on it, really the concept originated more than two years ago. We’ve been working toward this moment in time where we can hopefully transform the idea and vision into a reality,” Thurmond said.

He added that although his day job is politics, Thurmond’s true love is research and history.

“DeKalb has a very rich and compelling history that I familiarized myself with, particularly during the time I’ve served as CEO. I’m looking forward to sharing this history with all of our residents and with all of those who love and appreciate the people who sacrificed and contributed to our community,” Thurmond said.

He looks forward to the day when he can see school buses full of students visiting the mural on field trips.

“I think it will be a landmark that people will appreciate and be proud of for the years to come,” Thurmond said. “I want every resident, particularly our children, to be able to see themselves on this wall and to learn from and be inspired by the contributions that all DeKalb Countians have made,” Thurmond said.

The county anticipates the project will be completed by May. The research is still ongoing, and the DeKalb History Center, the Georgia Historical Society and other historians will vet the information in the mural before it is installed on the building.

Once the mural goes up on the Maloof building, there will be QR codes along the way, so visitors will be able to identify the photos and learn more about this history.

“Along the way, we’ll have QR codes for when people see the mural, they can scan the QR code and there will be descriptions of what’s happening or where they are in the mural,” Badgett said. 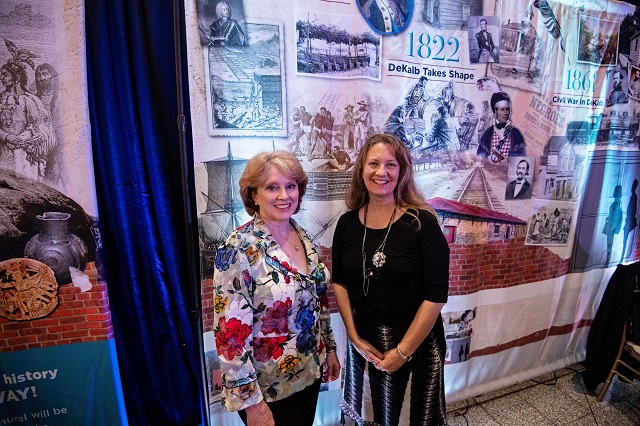 Jones Worley Senior Vice President Molly Badgett, (left) and Senior Graphic Designer Vicki Tagliatela pose with the mural the design firm created for DeKalb County during its unveiling at the bicentennial celebration kick-off at the Historic DeKalb County Courthouse on Friday, Dec. 10, 2022. The mural showing DeKalb’s history from prehistoric to modern times will go outside the county’s Maloof Auditorium in the city of Decatur. Photo by Dean Hesse.