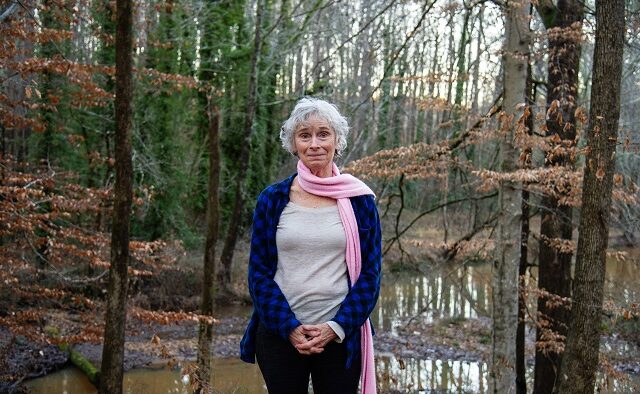 Francie Wallace and other neighborhood residents are pushing back against a proposal to rezone wooded property on Rockbridge Road in Stone Mountain for residential development. Photo by Dean Hesse.
Share

Stone Mountain, GA — A proposed housing development at 4994 Rockbridge Road has met with some strong opposition from neighbors, who are concerned that runoff into Barbashela Creek will erode banks and increase flooding.

Captura Properties, LLC represented by attorney Kyle Williams seeks rezoning for the property from a residential medium lot (R-100) to a residential small lot (R-60), which would reduce the required size of lots from 15,000 square feet to 6000 square feet. Both zoning designations are for single-family detached housing. The original plan called for 161 units at four units per acre, which is the maximum density allowed by the requested zoning. 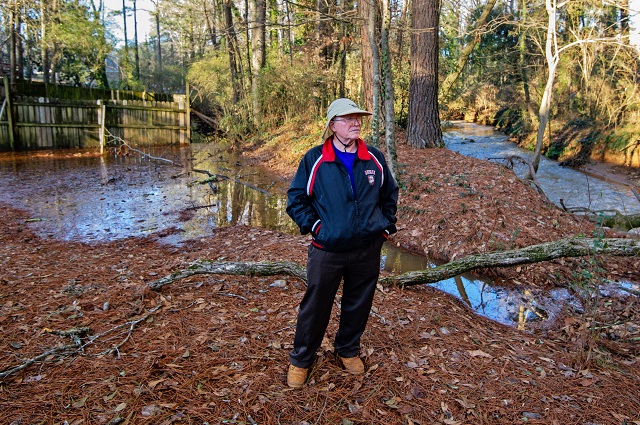 David Carter, a resident of Kenilworth Estates in Stone Mountain, stands in the backyard of a home on Barbashela Drive in the Mountain Valley Estates neighborhood near a proposed Rockbridge Road residential development. Runoff from recent rain is on Carter’s right and to his left is Barbashela Creek. “The runoff is going to be huge. This creek receives the water from the (Rockbridge Road) property and is already undercutting trees on the bank. I think it’s going to be a significant threat to people’s yards,” Carter said. Photo by Dean Hesse.

At the DeKalb County commissioners meeting on Aug. 9, the application was deferred for two full cycles. This decision allowed the applicant to bring a second revised version of the plans to the county. The revisions include a reduction in the number of units from 161 to 124, a reduction in density to 3.1 units per acre, an increase in open space, and a wider vegetation buffer.

DeKalb County planning staff recommended that the rezoning application be approved with conditions. The conditions include two pocket parks, preservation of mature healthy trees in vegetation zones, a homeowners’ association to preserve and maintain common areas, and ensuring that stormwater run-off will not increase after construction.

Francie Wallace, who lives in the Kenilworth neighborhood upstream of the proposed development, spoke about the importance of the watershed as well as the threat of flooding. Barbashela Creek flows from Kenilworth, through the property at 4994 Rockbridge Road, under Rockbridge and parallel with Barbashela Road, and eventually into the South River. 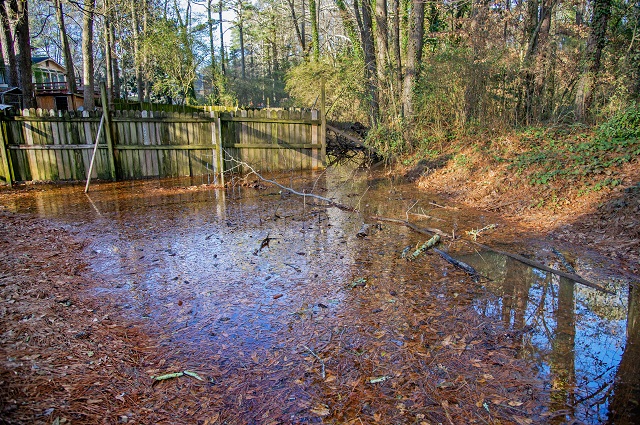 Water in the backyard of a residence on Barbashela Drive in Stone Mountain after recent rain on Jan. 4, 2023. Opponents believe a proposed Rockbridge Road residential development will increase flooding on the street. Photo by Dean Hesse.

Carter said that trees soak up rain and in his experience houses with bigger footprints and more impervious surfaces inevitably lead to more water flowing out of a site.

Carter added that erosion is already a problem. “[Barbashela Creek] is already undercutting the trees along the banks.”

Wallace stated that the areas along Barbashela Road backed up to the creek flood frequently.  She and other residents are concerned that despite the inclusion of stormwater mitigation measures, the problem will inevitably get worse after the new development is built.

Wallace says that she knows that the family who own the land want to sell it, but she hopes that the entire parcel could be preserved as green space to benefit families in the surrounding neighborhoods and students from nearby Rockbridge Elementary and Freedom Middle School. There are existing walking paths and a pond. 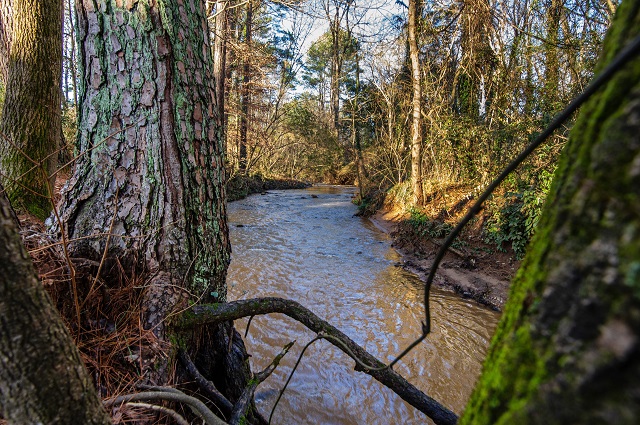 Opponents of the project expressed concern with the effect a proposal to rezone wooded property on Rockbridge Road in Stone Mountain for residential development will have on Barbashela Creek and flooding in the Mountain Valley Estates neighborhood. Photo by Dean Hesse.

Wallace acknowledges that the Atlanta area is in a housing crunch, but feels that already developed but abandoned or otherwise underused property would be a better focus for new projects.

“Only 2% of DeKalb County is undeveloped,” said Wallace.

A revised version of the rezoning application for 4994 Rockbridge Road returned to the Community Council on Dec. 13.

The council voted unanimously to deny it. The application is on the agenda for the DeKalb Planning Commission meeting on Jan. 5. Ultimately the decision will go to the DeKalb County commissioners at their zoning meeting on Jan. 26. 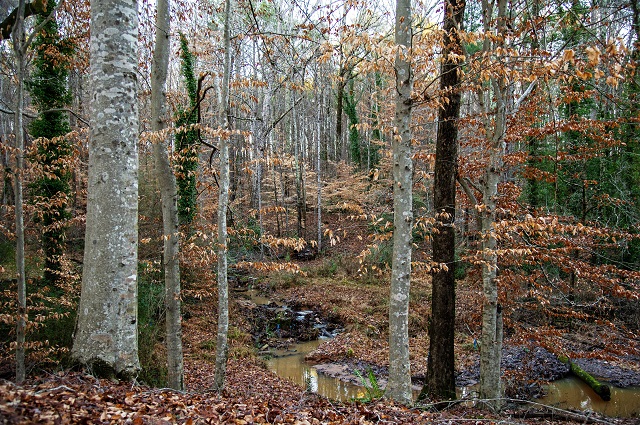 Local residents are pushing back against a proposal to rezone wooded property on Rockbridge Road in Stone Mountain for residential development. Photo by Dean Hesse.