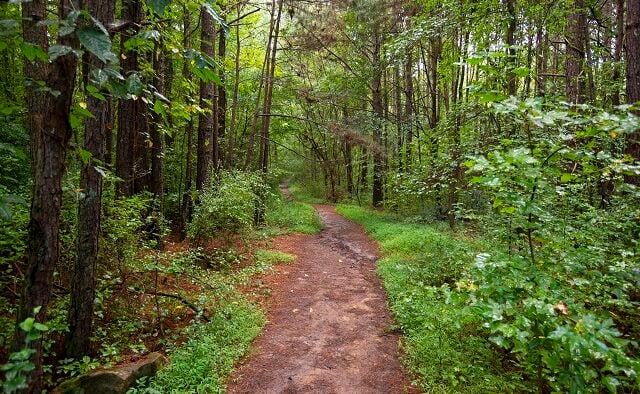 Activists opposing the construction of “Cop City” at the Old Atlanta Prison Farm have occupied the site and neighboring Intrenchment Creek Park, pictured here, the subject of a controversial 2021 40-acre land swap between DeKalb County and Blackhall Studios. Photo by Dean Hesse.
Share

DeKalb County, GA — A Georgia State Trooper has been shot, and a protester has been fatally shot near the site of the future police training center, an 85-acre police/fire training facility located in DeKalb County’s South River Forest that has been dubbed “Cop City” by activists.

Fox5 reported a protester was killed during the confrontation near the future training facility on Wednesday. The shooting occurred during a “clearing operation” around 10 a.m. at the site.

“This morning, dozens of heavily armed DeKalb police, Georgia State Police, and Atlanta Police shut down Intrenchment Creek Park and nearby streets and entered the forest,” a press release from Stop Cop City ATL states. “Residents on the ground reported ‘dozens of gunshots heard’ in Weelaunee People’s Park at around 9 a.m.”

During a press conference at Grady Memorial Hospital, Georgia Department of Public Safety Colonel Chris Wright said that a protester fired a shot, which hit the officer. The troopers returned fire, which killed the suspect, according to Fox5.

In a tweet, the Georgia Department of Public safety said, “There is an active incident on Constitution Road in Atlanta, in which a Trooper was shot. We will provide further information once available.”

“DeKalb County Government offers its thoughts and prayers for a speedy recovery for the Georgia State Patrol officer shot today in DeKalb County,” Thurmond said. “DeKalb County will continue to cooperate with and provide support to the multijurisdictional law enforcement task force charged with maintaining peace and security.”

Tensions have escalated between activists and the police, with several activists facing charges of “domestic terrorism” for their activities at the site. Supporters held a rally in front of the DeKalb County District Attorney’s office on Monday, Jan. 16, to demand District Attorney Sherry Boston drop the charges.

According to Stop Cop City ATL, police have raided the protest encampments at Weelaunee Forest multiple times, have detained people walking through the park and used tear gas and rubber bullets on protesters.

ATLANTA — This morning, dozens of heavily armed DeKalb police, Georgia State Police, and Atlanta Police shut down Intrenchment Creek Park and nearby streets and entered the forest. Residents on the ground reported “Dozens of gunshots heard” in Weelaunee People’s Park at around 9am.

The police killed a protester. One officer was shot; it is not clear whether or not this was a result of police fire, a protestor, or a police induced action. Community members have been calling in to the Mayor, the Atlanta Police Foundation, and DeKalb CEO Michael Thurmond to demand the police operation in Weelaunee Forest be ended immediately.

Police have repeatedly raided the protest encampments in Weelaunee Forest, harassed and detained neighbors walking through the park, and attacked protestors with tear gas and rubber bullets. During past raids, police have consistently escalated violent tactics on protesters who were sitting in trees or standing in a public park. On multiple occasions, they have cut tree limbs and rope out from under tree sitters in a fashion likely to cause serious injury or death. Today’s raid began with numerous armed police shutting down a public road and pointing guns into the park.

Community members have been demanding police end brutal tactics against forest defenders for months. Just on Monday, over one hundred neighbors and organizers gathered at the DeKalb County Courthouse to demand an end to police repression of the movement to stop cop city.

“My heart is breaking that someone was killed in Weelaunee Forest today. From June 6 of last year, when APD officers pointed firearms at peaceful protesters, to the ongoing raids of the last 2 months when police used chemical weapons against tree sitters, the police escalation of violence has been horrifying,” says a local resident who wishes to remain anonymous. “Atlanta police have shown a willingness to defend bulldozers with bullets. It’s unconscionable.”

“Police are the ones entering the forest with firearms and threatening to shoot. They’ve been doing this routinely for months, it’s sadly no surprise that eventually they would hurt someone. We urgently call for the demilitarization of Weelaunee before police paranoia and aggression harm more people.” says an anonymous organizer.

Despite already killing one protestor, the police raid of the forest protest encampments are ongoing. Reports from on the ground say that police are bulldozing the forest around the encampment and people sitting in trees are being teargassed and attacked with rubber bullets.