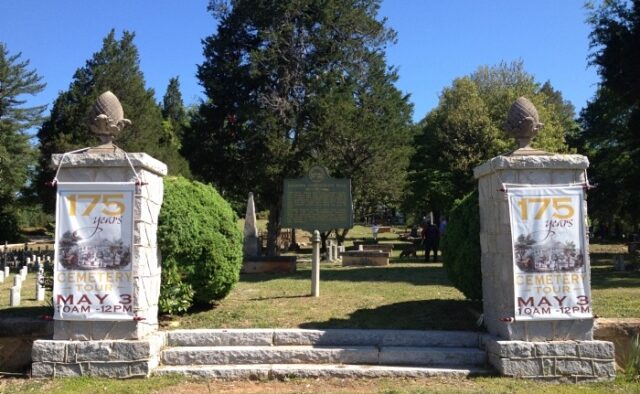 Stone Mountain, GA — Stone Mountain City Attorney Jeff Strickland offered a report describing the legal constraints on moving a Confederate monument in the Stone Mountain Cemetery to the city council at their work session on Jan. 17.

At the September council meeting, council members Clint Monroe and Gil Freeman objected to using public funds to maintain the area around the Confederate monument. At the council’s December work session, Freeman stated that he would prefer that the monument be removed and proposed a resolution stating that the cemetery is for burying the dead and not, in his words, political monuments. The resolution was amended into a directive for Strickland to research the city’s legal options.

Members of the Georgia Sons of Confederate veterans have attended both the December work session and the January business meeting to express opposition to any plan to remove the monument. A spokesman for the group, Martin O’Toole, stated Jan. 10 that if the city of Stone Mountain acted to remove the monument that the organization would sue the city.

Strickland said that Georgia law OCGA 50-3-1 b creates broad protections for all monuments, markers, flags, or memorials commemorating historical events, wars, veterans, and civil rights among other reasons, that are placed on public property with the intention that they remain in perpetuity. A monument or marker can be moved to make way for construction, but must be placed in a similarly prominent location. Citizens are allowed to bring suit if the statute is violated.

Strickland said that several cases related to the statue are in current litigation. Two have been heard by the Supreme Court, but the decisions were made based on procedural matters, not on the merits of the law.

Freeman asked whether there were bodies under the markers. Strickland said that his understanding was that the markers related to burial pits in that part of the cemetery, and added that the definitions in the statute are very broad and in his opinion apply to the monuments in the Stone Mountain Cemetery.

Councilmember Chakira Johnson said that the marker placed by the state is in the middle of what used to be a path, and asked if the city could relocate it. Strickland said it could be moved to a similar spot on the same property.

In response to a hypothetical question from Freeman about a monument to the Taliban, Strickland said that the council can reject any new proposals but is prohibited from removing monuments placed by previous councils.

In response to a question from Mayor Beverly Jones, Strickland said that the state law supersedes any relevant city or county ordinances.

Strickland said that he sent the mayor and council a 150-page packet with supporting information, including specific references detailing the history of Stone Mountain Cemetery. He added that the majority of the city, including the cemetery, is designated as a national historic area.

Strickland said that the Georgia Civil War Commission is a possible source of grants to maintain that section of the cemetery, and that if the goal was to relieve the city of the burden of maintaining the monuments, that it was theoretically possible to sell that plot of land to the GCWC. However, that would remove the city’s control over that section of the cemetery in the future.

Freeman asked about the monument that was removed from the courthouse square in Decatur. Strickland said that the Decatur monument was being regularly vandalized and was removed under an emergency injunction, for which the city argued that the monument created a potential for violence.

Strickland said that if the council wished to change the city’s options, the best way would be to push for a change in the state law.

Several residents and visitors expressed opposition to any plan to move the monument. Chris Billingsley, a resident of Smoke Rise, said that he visits the cemetery regularly. “Instead of removing the markers, I suggest you create a Friends of Stone Mountain Cemetery,” said Billingsley, adding that it would allow those who wish to see the area maintained a way to donate and volunteer.

Dennis Elm, a Stone Mountain resident, said that there’s plenty of space in the cemetery and no need to remove the markers. “You don’t like them because of something that happened long before you and I were born,” said Elm. Elm said that he helped place the markers and that he believes that some of the stones are right above the burial pit used to inter Confederate soldiers in 1864.

Cheryl Rivers-Goodman, who identified herself as the daughter of the first Black police chief in Stone Mountain, said that the city has more important priorities.

“That’s history. If you want it to look different, beautify it,” said Rivers-Goodman.

“It’s a cemetery. Let them rest,” she added.

Mike Schaaphok, a Stone Mountain resident and former candidate for city council post 4, pounded on the podium while saying that the city council was focusing on the monument rather than what he felt were more important matters, including potholes.

During City Manager Darnetta Tyus’ status report, Freeman asked if anyone had offered donations or volunteered to take care of the cemetery. Tyus said no one had so far. One audience member volunteered on the spot.

— Chief of Police James Westerfield gave a report on crime statistics over the past year. Westerfield said that crime overall had dropped.

“It’s a lot better,” said Westerfield, saying that the pandemic had seen a rise in violent crime all over the Atlanta area and Stone Mountain Village had five homicides per year over the preceding two years. However, in 2022 Stone Mountain had zero homicides. He attributed the decline in violence to many factors, including a concerted effort to reduce response times.

Westerfield also said that his department is on the way to being fully staffed. The Stone Mountain Police Department has recently sworn in three new officers: Daniel Wilson, Anna Bridwell, and Jovan Brown. The department is seeking to hire two more officers.

“The first obstacle is that some of the mics are dead. It’s not the microphones, it’s the cables,” said Hillis.

Hillis said that repairing the cables would be expensive, but the existing mics could be replaced with wireless mics. He added that the license for the webinar add-on is about $700 per year, and that the AV company which created the means to connect laptops to the display screens in the city council chamber could easily connect the existing setup to Zoom.

Jones asked about a previous estimate of $24,000 to create a livestreaming capability. Hillis said that amount included rewiring the building, but replacing the mics instead would avoid that. Hillis added that the proposed approach would fit the amount allocated for the purpose in the 2023 budget and would be ready quickly.

— At the Jan. 10 meeting, the council postponed a decision about a contract for short-term rental monitoring with Avenu Insights and Analytics and requested additional information. Avenu sent case studies of Avenu contracts from College Station, Texas, Sonoma County, Calif, and Kenai Peninsula Borough, Ark., along with a list of references for those and other localities where Avenue has provided their monitoring service.

A statement from Avenu said that they could verify that homeowners who were claiming a homestead exemption for a property were actually residing there for an additional fee, but would not be able to give an exact amount without knowing how many homesteads are in Stone Mountain.

The statement also said that if a short-term rental owner did not comply with requests to pay the hotel and motel tax, the city could take the owner to court. Avenu will send a representative who will testify in court supporting the city’s case.

The council took no action on the contract.

— The mayor and city council discussed raising their compensation. The last time the council got a raise was 2008, from $75 to $300.

Crowe said that residents are more concerned about potholes, engaging a city manager, and other tasks that need doing, and she would prefer that the council do more of those things before voting for a raise.

Jones said, “We are public servants, and I love working for the public, but we do go to a lot of meetings.” Jones added that the county has voted on a raise in the past two years.

Freeman said that he’d read in Decaturish that other local cities had approved raises in 2017. “Everyone likes to bring up inflation and the price of eggs. Prices have gone up a lot since 2008,” said Freeman.

Strickland said that the decision must be made before the first qualifying dates for the upcoming election. This means that any action on the ordinance must be taken before Aug. 22. Any raise would not take effect until the beginning of the next term in Jan. 2024.