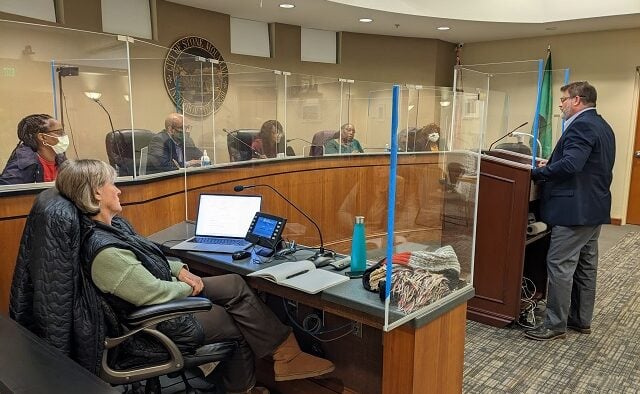 Stone Mountain, GA — The Stone Mountain Planning Commission supported applications for a new housing development and a meadery during a special called meeting on Jan. 24.

Both will be located on Mountain Street if the Stone Mountain City Council approves the projects.

Brian Davidson, a managing partner of Minerva, said that his company originally planned 55 townhome units for the site, but after seeking feedback from the community, Minerva altered the original design to preserve a central green space and allow pedestrian movement around the site. The number of units was reduced from 55 townhomes to 18 detached single family houses, and the design will conform to the existing architectural style of the neighborhood. 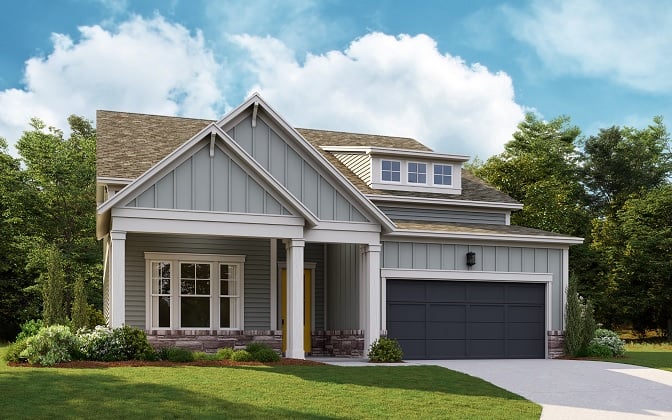 A rendering of one of the homes that would be constructed by Minerva USA. Image obtained via the city of Stone Mountain.

Davidson said that he believes his development will add to a residential core that will encourage people to walk to restaurants and other businesses in Stone Mountain Village.

In response to a question, Davidson stated that the prices for the houses would likely start in the “low $500,000s.”

Commission Chair Alex Brennan took a show of hands to gauge the sentiment in the room. Attendees were nearly evenly divided, with 16 in favor and 14 against.

Some residents expressed reservations along with their support. Sharon Friarson said that she favored the development, but expressed concern that taxes will go up, and some nearby residents may be displaced.

Steve Higgins said that while many would like to see the property remain greenspace, the city does not have the budget to take on maintenance of another park.

“Initially, I was against the project when it was townhomes, but now I think it will be a great addition to the downtown area. I know a lot of people would love this to be a park, but I don’t see any commitment from the city to turn it into a park,” said Higgins.

Other residents expressed the opinion that with Stone Mountain Park within easy walking distance, the city needed economic development more than it needed additional green space.

Thom DeLoach said, “I know it’s an emotional issue for people because we’ve lived here forever. What I’m excited about is the fact that someone is willing to engage with that property and make something happen there.”

Residents who were opposed to the development expressed worries about traffic, runoff, and the impact of what they saw as a large change to Stone Mountain Village’s small downtown. Some were also concerned that the zoning of the property is being changed with relatively little public input.

Rory Webb, a Stone Mountain resident and business owner, said that he would prefer a public vote on the rezoning.

“This is going to change the whole character of downtown, and not in a good way,” said Webb.

Susan Taylor said that she represented a group of citizens opposed to the development, and that they would present a petition to the city council. Taylor said that the property was designated as green space in Stone Mountain’s master plan, which had been developed with a great deal of public discussion and input. Taylor added that increased runoff and traffic would put pressure on the city’s infrastructure, which would in turn cost the city money, and that such a large decision should be made based on research.

Resident Grace Kelly suggested that keeping the property as a green space to hold commercial events could potentially make more money for the city than taxes from the proposed residences.

The commission approved the application with some recommended conditions, including expanding Manor Drive to convert it to a two-way street and creating a five-foot path along the edge of the property next to the railroad tracks that will be publicly accessible. In addition, shared amenities such as the green space in the middle of the development must be maintained by a homeowners’ association. Commission member Felicia Evans added a recommendation for a traffic study.

The approval passed with three of the four members present voting in favor. Commission member Jelani Linder recused himself from discussion and abstained because of his personal connection to the project.

In the other business item of the evening, Justin Schoendorf of Monk’s Meadery requested a special use permit for 5379 East Mountain Street to add a mead taproom to JavaVino’s planned café and coffee roastery at the location.

Monk’s Meadery has been in business since 2011 and owns a taproom in Atlanta and a meadery in Athens. Schoendorf says the company plans to bottle and package mead in Stone Mountain and have a taproom where people can try different varieties.

Schoendorf explained that mead is an alcoholic beverage made from honey, similar to beer or cider.

Schoendorf believes the meadery will bring tourists into the city. “We draw a pretty big crowd,” he said.

“We’re the official meadery for DragonCon and the mead partner for the Georgia Renaissance Festival,” added Schoendorf.

Support for the meadery was nearly universal among attendees. Thomas Wiley said he thought that it would be a great asset. “The city needs some growth and people coming in,” said Wiley.

Resident Mike Schaaphok said he was ambivalent about the meadery, but questioned whether the original application from JavaVino for a cafe and roastery had been a “bait and switch” since a meadery was now being added.

Linder clarified that when JavaVino submitted an application for the café, the owner mentioned that he wanted to partner with a meadery.

Schaaphok also appeared concerned that a meadery might attract the wrong element if the establishment stopped serving coffee.

“I think it should be provisional, so long as it’s serving a more amenable and acceptable population of Stone Mountain rather than being just Renaissance Faire wannabes that show up with their lightsabers,” said Schaaphok.

Sanford Scott, another person who spoke during the meeting, was not worried.

“I have never seen a strip that has so much traffic, but all the buildings are vacant. If this man wants to bring life to Stone Mountain, I don’t care if they carry lightsabers so long as they pay taxes,” said Scott.

The special use permit for the meadery was unanimously approved by the commission. Both items will be passed on to the Stone Mountain City Council for a final decision.

In other news, Alex Brennan was re-elected as planning commission chair and Jelani Linder was elected as vice chair. Brennan announced that there are three open seats on the commission and encouraged people to apply.