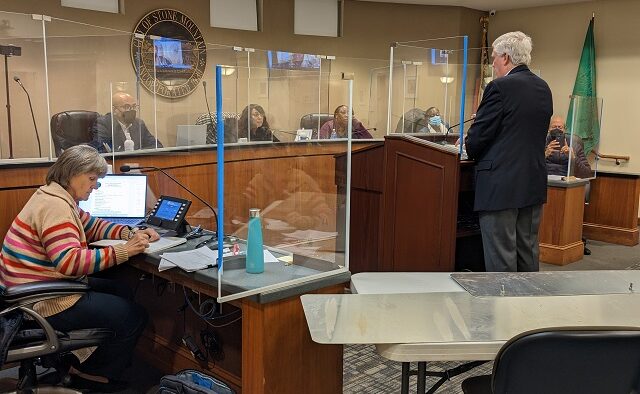 Kennedy Shannon of iParametrics LLC spoke to the council about the company’s grant writing services. The city is seeking assistance with applying for American Rescue Plan Act funds as well as other grants, including an Atlanta Regional Commission grant with an upcoming deadline.

Shannon said that as a compliance attorney, she will be able to make sure that proposed uses are compliant with the rules, as well as assist with researching and applying for appropriate grants.

Councilmember Teresa Crowe asked how the company will be paid. Shannon said they charge an hourly rate of $121 rather than taking money out of the grant. City Manager Darnetta Tyus said that the money will come from the general fund as budgeted for 2023.

Mayor Beverly Jones asked if there was some kind of compromise because if the city doesn’t get the grant, they are spending money with no return.

In response to a question from Crowe, Shannon said that iParametrics would meet with the city’s public works department to find out if the city has sufficient staff or can hire sufficient staff with money provided from the grant.

In response to another question from Crowe, Shannon said she personally has secured grants for Detroit and Kansas City, and she will be the one writing the grants for Stone Mountain.

Approval of the contract with iParametics passed unanimously.

City Clerk Shawntez Edmondson said that city staff were seeking ways to make budgeting easier and provide more transparency, and ClearGov provides a comprehensive overview of the budget and a website with real-time purchase information.

Kevin Dinh from ClearGov said that the company is currently working with a number of cities and counties in Georgia. Their software is intended to reduce the number of hours required to create a budget and also creates a final product that’s easier to read and understand. It will also create a digital budget book as an interactive website so that purchases and purchase approvals are easier.

Edmondson said, “I think we should do this because then our decisions will be data-driven. Numbers don’t lie.”

Tyus said, “In the frustrating budget process we just did, we had an Excel document and a Word document, and neither of them talked to each other.”

Tyus went on to describe the prospect of using the new software as “exciting.”

Approval of the contract with ClearGov was passed unanimously.

— Edmondson stated that he recommends entering into a contract with Avenu to monitor short-term rentals in the City of Stone Mountain. He said that he has received complaints that some of the rentals are not safe, and has also determined that many of the owners are not paying the 5% hotel and motel tax. Edmondson estimates that the city did not receive $335,000 in owed taxes from short-term rental owners in 2022.

Kevin McDonough of Avenu stated that a full-service contract includes monitoring, legwork, and communication with owners.

Councilmember Gil Freeman asked what process is typically used to get compliance and how it is enforced.

McDonough said that Avenu will give a warning and a second notice, then will send the information about the rental to code enforcement or another city authority. Enforcement will be up to the city.

Councilmember Chakira Johnson asked how much the fee for short term rentals currently is, and if the city could increase the fee to offset the cost of the contract with Avenu.

Edmondson said that the fee for short-term rentals is $180 per year, and that the city has not reviewed the fee schedule for eight years, so an increase was appropriate.

Council members sought clarification on what the company could do about owners claiming a homestead exemption, whether Avenu could charge on a contingency basis, and what the success rate for taking owners to court has been. After McDonough provides answers to those questions, the contract will be put on the January work session agenda for a vote.

— After a lengthy discussion, the city council approved purchase of street sign toppers that say “Dr. Martin Luther King, Jr. Drive” for the length of East and West Mountain Street. Hanging signs for one intersection are pending approval from the Georgia Department of Transportation and DeKalb County. The signs will not change addresses or the official name of the street, but are meant to honor King. Tyus said that smaller toppers for corner street signs will be installed by the end of the week.

— During public comment, Susan Taylor and Jan Dunaway spoke against a proposed town home development at 5380 West Mountain Street. Dunaway said that her property on West Mountain Street property floods frequently because of stormwater runoff from city property, and that a previous attempt at a fix by the city has not worked.

Dunaway said that further development at 5380 West Mountain Street will create more problems. Dunaway said that she had planned to sell the property to pay off her daughter’s student loans, but had been unable to sell it because of the flooding.

— Martin O’Toole, a spokesman for the Georgia Sons of Confederate Veterans, told the council that if the Confederate monument in Stone Mountain Cemetery is moved, that the organization will sue. The city has no current plans to move the monument, but is seeking information from the city attorney about what their legal options are.