What’s in store this season? A sneak peek at Decatur High’s spring sports

What’s in store this season? A sneak peek at Decatur High’s spring sports 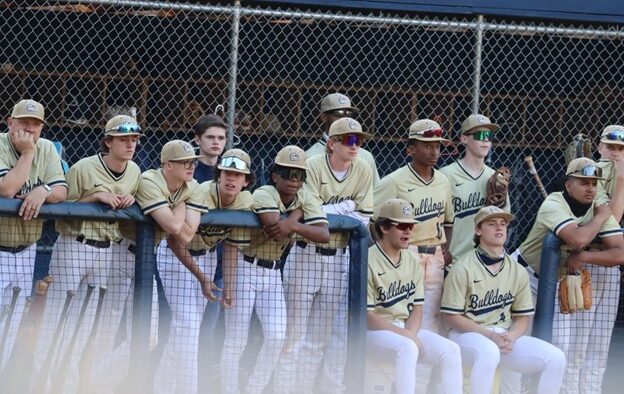 Disclosure: The author of this article is a member of the boy’s varsity tennis team.

The Bulldogs are set to get the show going in baseball, tennis, soccer, and lacrosse. If that sounds like a lot, it is. The coming months will be as busy as ever for Decatur, and how better to prepare than with a sneak peek into the world of DHS’ spring sports? 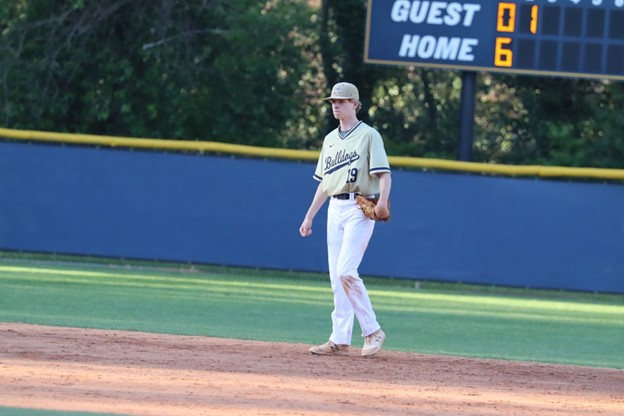 The Bulldogs have a hefty task on their hands in baseball if they want to repeat 2022’s incredible season, or, better yet, go one step further.

Decatur made it all the way to the semifinals of the State Championship tournament after finishing second in its region with a superb 13-3 record (part of a 26-12 overall record). The Bulldogs went on to win three playoff games, dispatching everyone from Starrs Mill to Veterans High before Loganville High School ultimately proved too much to handle, but only by the slightest of margins.

One year later, it’s a new Decatur but with the same sky-high expectations. Head Coach Vic Radcliff has taken over from Coach Gilbert and a few key pieces of last season’s playoff run have since graduated. But for senior and pitcher Noah McMahon, the expectations for 2023 are as clear as ever – “another deep playoff run.”

McMahon says that last season’s success is far from the crest for Decatur’s baseball aspirations, but instead the foundation for the next level. The Bulldogs’ quality is “through the roof,” and if the team can “put in the work,” the sky is the limit. McMahon says he wouldn’t mind a bit of revenge, highlighting Loganville as an opponent he wants to face again in the playoffs.

McMahon concludes by setting Decatur’s aims straight. He said 2022 “set the bar,” but now that’s the “minimum.” The Bulldogs firmly have their “eyes on the state championship,” and with the experience of last season under their belt, will be all that much harder to stop. 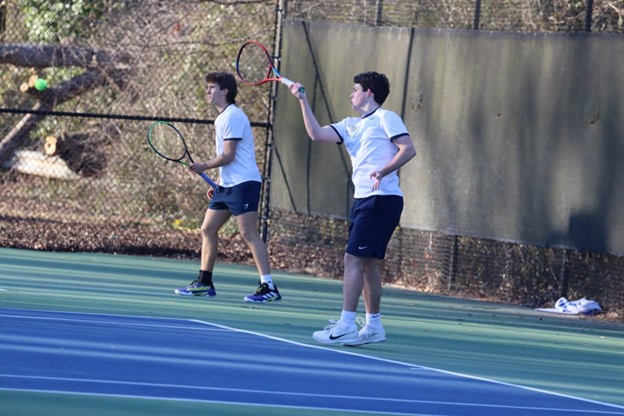 The Bulldogs hope to do what’s never been done before in 2023 – bring a tennis state championship back to Decatur. For senior Julian Lagon, there’s the confidence that Decatur can “definitely go all the way to the state championships and win the title.” Fellow seniors and co-captains Luke Atkinson and Dylan Cooper agree; adding some silverware to Decatur’s unfortunately vacant tennis trophy cabinet is the “main goal” and “expectation” of 2023.

The Bulldogs have one thing in their favor; team spirit and camaraderie. The entirety of last season’s roster is still intact and according to Cooper, “we’ve all gotten better.” That makes Decatur more than just teammates, but friends as well. This season, however, is a bit of a final chapter in this era of Decatur’s Varsity tennis. There are four seniors on the team this year, including both team captains. But Lagon makes it clear that that isn’t an obstacle but rather a motivational factor for the Bulldogs to “have a great last high school season with my boys,” and end on a high note.

If that’s going to happen, it’ll be under the guidance of first-year head coach David Messer after Andrew Kessel’s resignation after a two-season stint in charge.

Atkinson was “sad to see” Kessel depart, a “great coach that gave great and helpful advice during our matches,” according to Cooper. Messer is no stranger to the program, however, and served as the junior varsity coach last season.

Cooper is “excited” for the beginning of Messer’s reign, predicting “a great season,” on the horizon for Decatur. Atkinson, meanwhile, says that not only is Messer a “great coach” but “he will do what is best for the team.”

If one thing’s for sure, the Bulldogs will need to be at their very best from day one on. Its conference is one of the toughest in the 5A region, leading to two straight four seed finishes. Subsequently, Decatur has gone out in the second and first rounds of the state tournament in the last two seasons.

The Bulldogs do have an upper hand in its conference this season thanks to the exits of recent powerhouses to other regions, but above all Decatur has faith that its mix of talent and community will propel it to the promised land.

As Lagon says, “I can speak for most of my boys when I say I’m looking forward to winning that state championship.” 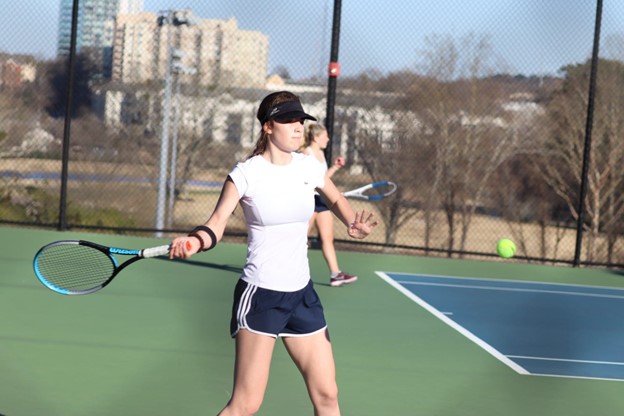 Via kesonthedhspics – DHS Girls Tennis playing an away game vs St. Pius

The girls varsity tennis team, on the other hand, is going through a bit of a changing of the guard.

Four seniors have left, including three regular starters from last season. One senior and a large group of juniors are left as the “core” of the team. Despite the departures, Head Coach James Pressley sees the bright side.

“They (the juniors) have experience and can help lead and direct any newcomers,” Pressley said.

Pressley is just as optimistic about the Bulldogs’ chances in the upcoming season as he is that the team can rebound from its roster revamp. In his two years in charge, Decatur has stayed on an undeviating path of improvement, going one round further in the state playoffs every season.

There’s no reason for that to change this year, according to Pressley, who sees 2023 as both a time for improvement and change, from the roster to a move to a new region. For him, every match is “an opportunity to learn something new.”

He expects to try out different lineups and styles throughout the season to prepare for playoffs, especially with tricky opponents such as Northview, Marist, and North Atlanta on the horizon. All four won state championships in their regions last season, but rather than be daunted, excitement is the word of the day for Pressley and the girls’ tennis team. 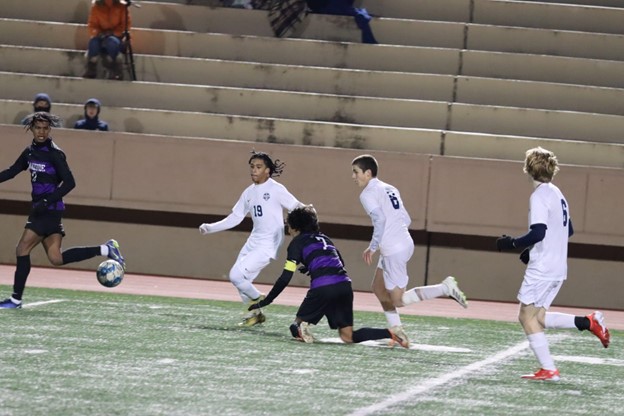 Few DHS sports have undergone as much change as Decatur’s varsity boys soccer team. The moves start at the top.

Head Coach Derrick Burgress has replaced Stephen Gathany, after a long-term stint at Cross Keys High School for 15 seasons, where he won three region championships, reached the state final, and earned a USA Today National Ranking in 2018 and 2019. Thirteen seniors, including two players named to the All-Region team and the Region Player of the Year on last season’s roster have since departed as well.

For him, a successful season is what fits his players’ capabilities, whether that’s a region title or second place. The important thing for Burgress is creating a single team-wide identity.

“If you ask 15 players how to win a game, you’ll have 15 different answers. I want one answer,” explains Burgress.

To do such a feat, he plans to first focus on Decatur’s principles of play. He illustrates how formations and the shape in which a team lines up at kickoff aren’t nearly as important as how the team actually plays once the ball starts rolling. With this forward-thinking perspective on the game, Burgress hopes to implement an “attractive, attacking brand of soccer that entertain,” in his debut season at DHS. 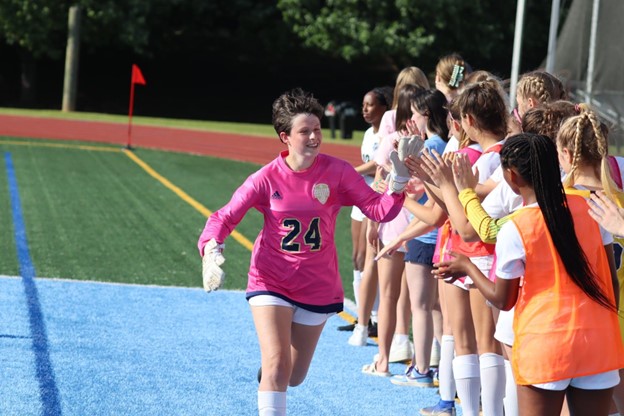 Decatur’s varsity girls soccer team is looking to build off a superb 2022 season as it prepares for the coming campaign.

The Bulldogs went on a remarkable run to the final four of the state championship and finished third in its region with a 12-7 overall record. Four Deactur players were named to the All-Region team, although three of them were seniors and have since graduated.

Despite the losses of “a number of great players,” Head Coach Douglas Altizer believes that “there are players that are ready to step up and into the key roles this year.”

He is confident that Decatur can still “compete with the best teams in the state,” while sophomore and starting goalkeeper Maddie Cooper says the goal for 2023 is “to make it that far again and hopefully win this year.”

Senior Sam Manasso agrees. “With the talent and energy of this year’s team, we expect to have a very strong season.” Decatur has “exciting plans for this season” that will push it to build off the strong foundation last season built. The Bulldogs would also like a second shot at the team that knocked it out of state – Midtown High School.

Both Cooper and Manasso point to the Knights as a special opponent this season. Decatur’s clashes with Midtown are always “exciting and tense,” and though Midtown got the better last season in the state semifinals, Manasso is confident Decatur will “bring even stronger competition to the field” while Cooper makes it clear the Bulldogs “can win the game this year.”

Cooper concludes by imploring even more home support for the Bulldogs. “Everyone should come support us this season,” as Manasso promises that Decatur will “work as a team to represent DHS as the best we can be.” 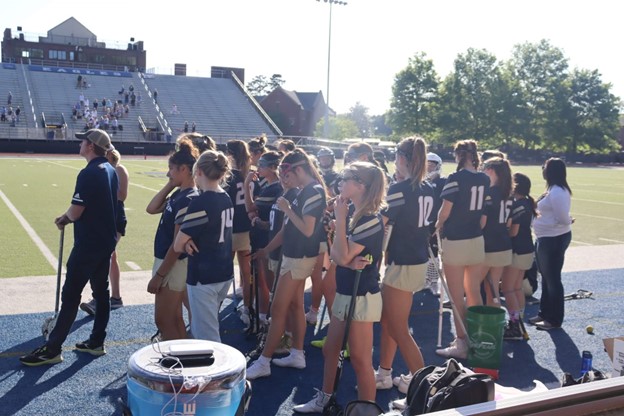 The girls lacrosse team is yet another program undergoing a coaching change.

Alex Powers is replacing Jessica Mayer after a seven-year term in charge. The last of which ended with a second-place finish in region play thanks to a 5-2 record before a first round playoff exit to Mount Paran.

Junior Ruby Kelly sees the beginning of Powers’ era as a chance for the team to take a “new direction.”

For Kelly the Bulldogs’ goal for the upcoming season is to  “work together and play smart.”

That teamwork will help Decatur adapt to another big change coming Decatur’s way – a region shakeup, meaning the Bulldogs will face some unfamiliar opponents, an “exciting” development for Kelly that is only going to help Decatur.

“This year will really be about growth for not just the team but the whole program.” 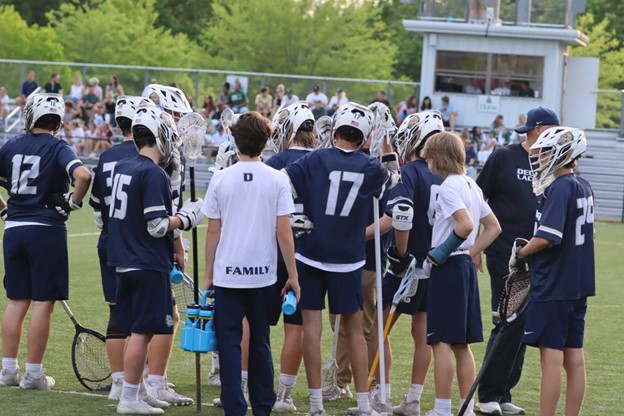 Via kesonthedhspics – The DHS Boys Lacrosse team vs blessed trinity

The boys lacrosse team has high hopes for the 2023 season after the 2022 campaign set the tone. Decatur made it to the second round of the state playoffs after beating 1-seed Walker Wolverines.

The Bulldogs finished 4th place in region play and had an 8-8 record. Junior Clinton Schaeffer is optimistic about the Bulldogs chances this time around and hopes to see Decatur be a “very successful team,” and make another playoff appearance.

Schaeffer is also looking forward to Decatur’s “fun environment” off the field and enjoying one last season with the many seniors on the team, while simultaneously introducing new freshman talent in.

Schaeffer is particularly excited about the ITP tournament, held at DHS from Feb. 24 to the 25th.

Four teams play for the title, and Schaeffer is “hoping to have a bunch of people coming out,” to support the Bulldogs.