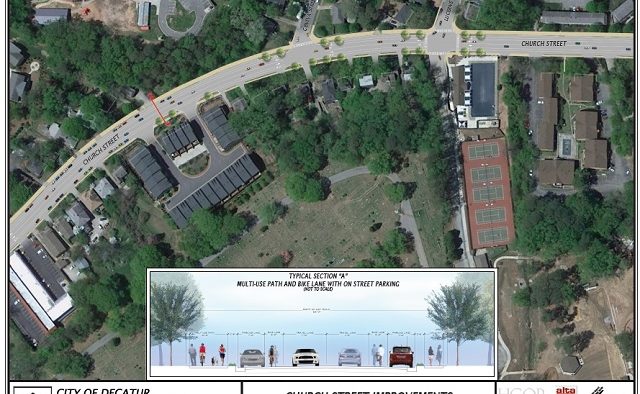 A conceptual drawing of improvements to Church Street, published in 2012. Source: City of Decatur, GA
Share 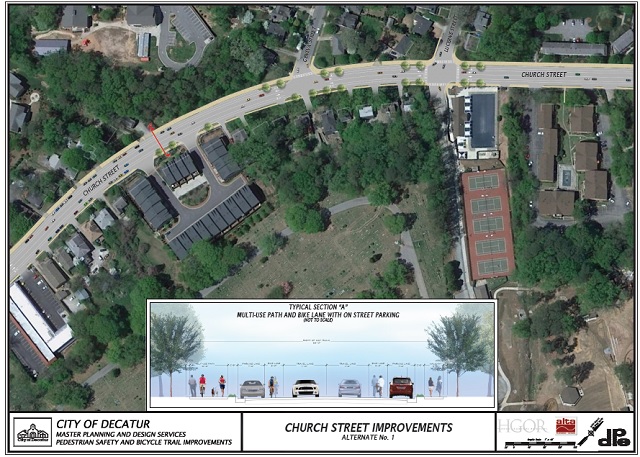 A conceptual drawing of improvements to Church Street, published in 2012. Source: City of Decatur, GA

The city of Decatur is asking for public input on plans that would overhaul the intersections of Commerce Drive with Clairemont Avenue and Church Street.

If fully realized, Church could become a two-lane road all the way up to the city limits. The improvements are expected to cost $4 million, and will be funded primarily with transportation grants. Discussions about the project have been ongoing for several years, and Deputy City Manager Hugh Saxon said the project is still in the preliminary planning stages.

There will be a workshop on those improvements Wednesday, March 19, at city hall, located at 509 North McDonough Street in downtown Decatur. The meeting begins at 6 pm and ends at 8 pm. Saxon said the improvements will “make it easier for pedestrians to cross” at the intersections and said there would also be additional bike facilities on Church Street.

“The project is based on Decatur’s 2008 Community Transportation Plan and is a project in the 2010 Strategic Plan,” a meeting announcement from the city says.

Information in a 2012 fact sheet on the project provides some additional details.

Proposed improvements to the Clairemont-Commerce intersection include:

– Removing the northbound right turn lane and sharing it with the through lane.

– Remove the westbound left turn lane and share it with the through lane.

– Using smaller radii at all four corners of the intersection to reduce the length of the pedestrian crossing to reduce exposure of pedestrians to traffic.

Improvements to the Church Street and Commerce Drive intersection include:

– Removing one through lane.

– Using smaller radii at all four corners of the intersection to reduce the length of the pedestrian crossing to reduce exposure of pedestrians to traffic.

Lately there’s been more activity related to the city’s streetscape projects. The city plans to move forward with $2 million worth of McDonough Street improvements that would narrow the road from four lanes to two. That’s expected to begin in June of 2015. A planned Oakhurst streetscape project that’s been discussed for several years is also finally getting off the ground.