Renfroe enrollment could jump by 137 percent

Renfroe enrollment could jump by 137 percent 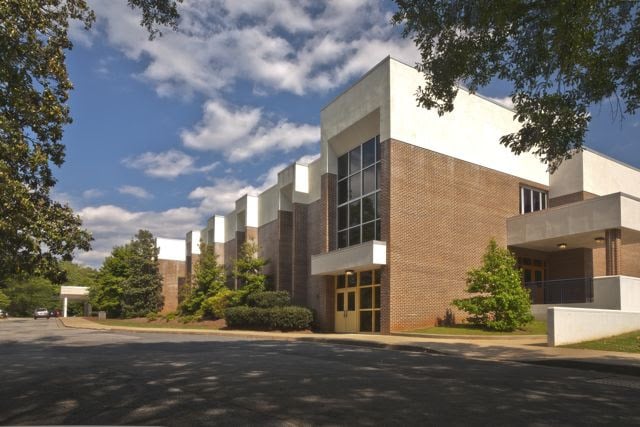 If Decatur annexes more residential property into the city limits, it will cause student enrollment at Renfroe Middle to increase by 137 percent by 2018, adding approximately 1,300 more students to the middle school’s campus.

That’s one of several conclusions in a report produced by consultants preparing City Schools of Decatur’s master plan for expanding its middle and high schools.

Consultants Cooper Carry and Kimley-Horn presented Phase 1 concepts for renovating Renfroe during an Oct. 16 community meeting. The presentation provided price points for different renovation concepts and attempted to predict what bringing 1,000 more students in four years will do to local traffic.

School officials also project the number of staff members will grow to from 100 to 175 in 2018. Traffic to the school would increase by 300 percent, according to the consultant’s report, from 200 per day to 650 vehicles per day.

The city of Decatur is currently revising its annexation master plan, and other neighborhoods – like Decatur Terrace – have asked to join the city as well. Commissioners are expected to adopt the new plan in December.

“Without a doubt, measures must be put in place to mitigate this increase in vehicles,” the traffic study says. “Additionally, assuming the occupancy of buses increases from 35-40 students per bus to 50 students per bus, an increase of more than 200 percent (from 6 to 16 buses) will occur in 2018.”

The traffic report also recommends CSD discuss an agreement with Agnes Scott College to use its parking deck and recommends further staggering the school day for Renfroe and Decatur High to reduce congestion.

“During observations, it was noted that heavy congestion occurred along West College Avenue at approximately 4 pm,” the traffic report says. “This congestion was generally created by the lack of capacity at downstream intersections, in particular West College Avenue with South Candler Street. One source of this congestion may be the closely spaced school start and end times between the high school and middle school. Decatur High School is in session from 8:30-3:30 and Renfroe Middle School is in session from 8:40-3:40. This very small difference (only ten minutes) in schedules, coupled with the two school’s proximities (less than a half-mile) may have a substantial amount to do with creating the congestion experienced during the peak hours of the day. Consideration should be given to staggering high school and middle school start and end times more, which may result in less congestion along West College Avenue, especially during the afternoon peak periods.

“In addition,” the traffic report continues. “To staggering start and end times between the two schools, consideration could be given to staggering start and end times between each grade at the middle School. While this may be challenging from a staffing and internal operations perspective for the Middle school, staggering arrival and departure times by grade or another metric may lower peak vehicular demands at the school. Bus scheduling and the scheduling of after school programs, such as athletics and clubs, plays a significant role in the ability for this to be successful.”

Consultants presented four different options for expanding Renfroe, ranging in cost from $31.4 million to $45 million. CSD borrowed $18 million in certificates of participation money, referred to as COPS, to pay for the projects at Decatur High and Renfroe Middle. The School Board recently awarded more than $1 million in contracts for these projects.

The reports anticipate future revenue sources for CSD’s expansion, including a general obligation bond in 2015 and a special purpose local option sales tax in 2018, both of which would need to be approved by voters.

Here are the reports presented on Oct. 16. The presentation of the Decatur High master plan will be held on Nov. 3 at 6:30 pm. The location hasn’t been announced.