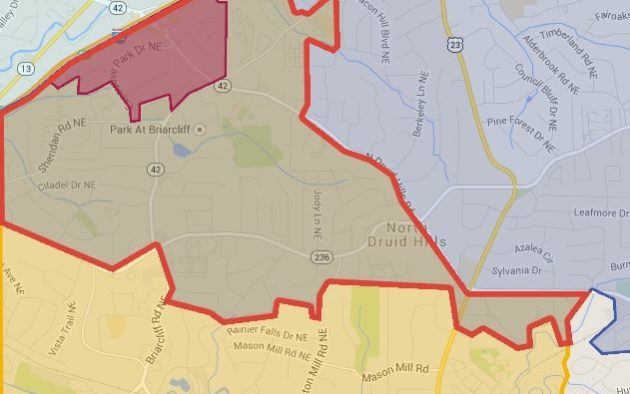 A sampling of some of the overlapping boundaries we've had to navigate.
Share 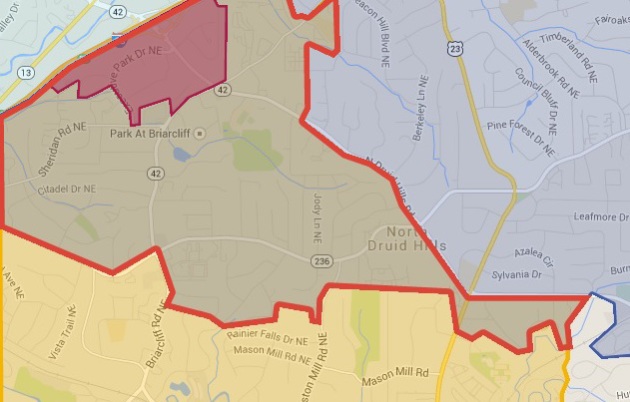 A sampling of some of the overlapping boundaries we’ve had to navigate.

The thought occurred to me as I left an annexation meeting in the Laurel Ridge Shamrock neighborhood.

There was just one problem. I had no idea how to make one.

I put out the call on social media. As luck would have it, a reader, Andrew Feury was already creating one using Google Maps. Like me, he has no dog in this fight. He lives in Kirkwood and nothing will change for him under any of the proposals on the table. I live in Decatur, so nothing would immediately change for me either. We’re both spectators of this perplexing puzzle game that’s going on around us.

“I was just following it,” Andrew told me. “I have some friends who live in unincorporated DeKalb. It’s more interesting to watch when it’s not happening to you.”

He sent me the map the next day. I published it soon after. I informed people that the map is a work in progress and asked for their suggestions on how to make it better.

This is the most up-to-date version of our map. It contains a category in the drop-down menu showing five different contested areas. By selecting or un-selecting this category, you can see a version of the map that contains the overlapping regions. Additionally, if you click on one of the contested areas from the drop down menu – like LaVista Hills, Brookhaven and Together in Atlanta – it will take you to the highlighted section of that map.

It’s not perfect, by any means. For one, we aren’t able to use Google’s Map editor tools to separate the map by layers so users could check or un-check a box for each one, something we’re both pretty sure was offered in prior versions of the Google Maps editor. The map is subject to change depending on the latest developments in the state Legislature.

There’s been a fair amount of arm-twisting and politicking from the various cityhood and annexation groups since we published it.

I’ve been besieged by representatives of these groups, haggling about what should be in this map and what shouldn’t, like a football coach trying to overturn a bad call.

Once I realized that Andrew was actually going to be helping me navigate political disputes, I thought the only humane thing to do was to pay him. As part of the deal, Andrew is helping me keep the map up to date as this story develops and has added a tag linking the map back to this website. Our subscribers, who subsidize this journalism project for a mere $6 a month, help make things like this possible.

If you appreciate our efforts to keep you informed about this stuff, please consider becoming a subscriber.

The map is pretty revealing.

For example, the exclusion of the Medlock Park neighborhood from cityhood or annexation map is particularly striking.

“It’s like, wow every single one of these cities is going out of their way to avoid Medlock Park,” Andrew said.

Deciding what to include in the map and what to reject has been difficult. For simplicity’s sake, I decided to ask Andrew to only include things in the map that have a shot of making it through the Legislature in the 2015 session. Some groups, like Save Tucker, have their own maps but as far as we know they aren’t being seriously considered at the legislative level. The same is true for longer-range annexation plans like Clarkston and Lithonia. We did modify the map to reflect the most-recent voter-approved annexation in Clarkston.

Every time we modify the map, it becomes more complex and sorting through it becomes more complicated. Andrew asked me to remind readers that each section of the map contains a link back to the source material. If you want more detail, or if you want to check our work, you should click those links and inspect each plan.

I plan to add a section to our Decaturish Database that will serve as a static page on the annexation issue. Here you will find this map, as well as information about the different cityhood groups and annexation plans. You’ll also find contact info for the folks who serve on the House Governmental Affairs subcommittee on cityhood.

Decaturish will not take an editorial position on the cityhood and annexation issue. We will not support one plan over another. We feel our role as a news organization is to give you facts, not be a cheerleader or antagonist.

My own personal opinion on the subject is fixing DeKalb County government would be infinitely simpler than trying to carve up the county in a way that’s fair to all parties involved. As it stands, some groups will win and some will lose when the dust settles. But county government will be with us in whether cityhood happens or not. Its dysfunction, along with the struggles of the county’s school system, is the impetus for all of this. Fixing it should be top priority, not an afterthought. It should be something that members of both parties can agree to, at least philosophically.

We hope this map will illuminate and not confuse the issue.

“We’re trying to make sense of the chaos,” Andrew said.