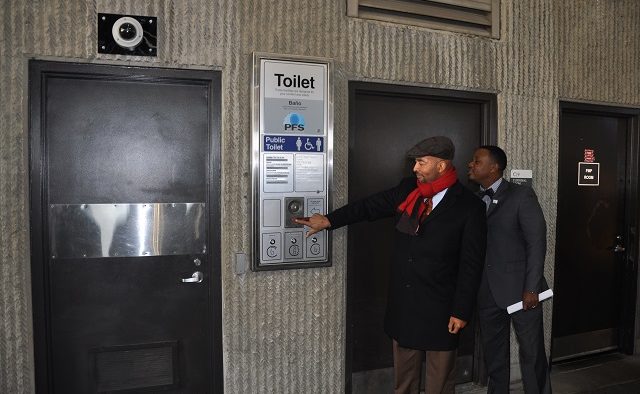 MARTA CEO Keith Parker shows off a state of the art bathroom system at the Lindbergh Station. Photo by Dan Whisenhunt
Share 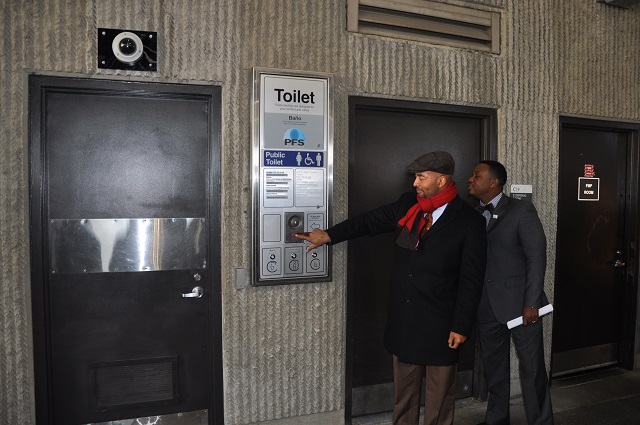 The basic things have held MARTA back for years.

Trains haven’t run on time. Funding for the transit system has been hamstrung by a rule that dictated where MARTA could spend the sales tax money it receives from the city of Atlanta, and Fulton and DeKalb counties. MARTA  raised fares while cutting services. Also, the agency had removed 2/3 of station bathrooms within five years.

Anyone who has ventured into a urine soaked MARTA elevator could tell you that.

But after several years of MARTA’s numbers moving in the wrong direction, the agency is getting its act together under the leadership of CEO Keith Parker. Trains are running more frequently on the weekdays. The archaic funding restrictions requiring the agency to devote 50 percent of its money to operations and 50 percent to infrastructure have been suspended. Clayton County voters overwhelmingly voted to allow MARTA to expand its services there, the first time the system has moved into a new county since the 1970’s.

Parker, who took over in December 2012, on Dec. 11 showed off one of MARTA’s new state of the art restrooms at the Lindbergh Center Station.

“One of the major concerns we’ve had with restrooms is the is cost,” Parker said. “The cost of providing restrooms is intense.”

MARTA came up with a cheaper, more effective solution, Parker said. The station bathrooms require someone to push a button to speak with an attendant who will be on call from 6 am to 7 pm. The attendant can open the doors remotely and let people in one at a time.

Bathrooms aren’t the only things that are getting smarter at MARTA.

During a media briefing on Dec. 11, Parker said in 2015 MARTA will begin providing passengers wireless internet. Passengers will also be able to purchase fares using a cell phone and use their phones to get through the gates. The agency is also trying to expand its food and drink options at stations.

A ridership report released by the agency shows more people are using trains and buses. According to MARTA, rail ridership is up by 9.2 percent and bus ridership rose by 9.1 percent.

According to the report, “Passenger revenue for September 2014 was $13,337,412, which resulted in an unusually high average fare per boarding of $1.0906 for the month.  The passenger revenue amount was 10.2 percent higher than for last September, and was 14.6 percent above the forecast.”

There’s also been progress on redeveloping the Avondale Estates station into a transit oriented development. MARTA is working with Decatur’s Downtown Development Authority to build 604 apartment units and 25,000 square feet of retail space at the station.

Decatur Assistant City Manager Lyn Menne said, “The terms of an agreement have been finalized. Bottom line is that it is moving forward.”

Amanda Rhein, senior director of transit oriented development for MARTA, told Decaturish that construction on the $95 million project is expected to begin in 2015.

“Avondale is complicated by the fact we have a significant amount of replacement parking,” Rhein said.

Rhein said MARTA is applying for a grant to offset some of the costs. Parker, who also mentioned that there’s a transit oriented development for the Arts Center Station in the works, was upbeat about the possibility of the Avondale project moving forward next year.