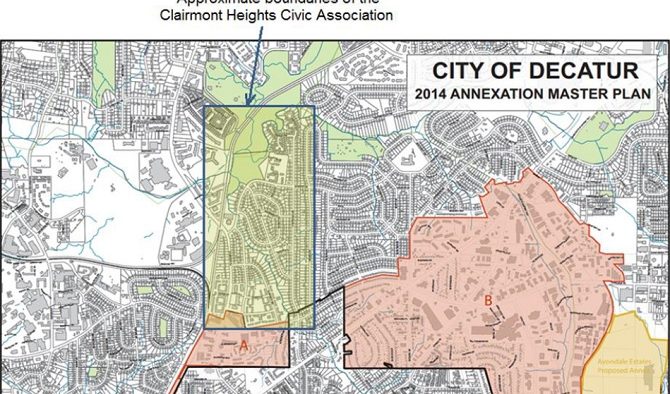 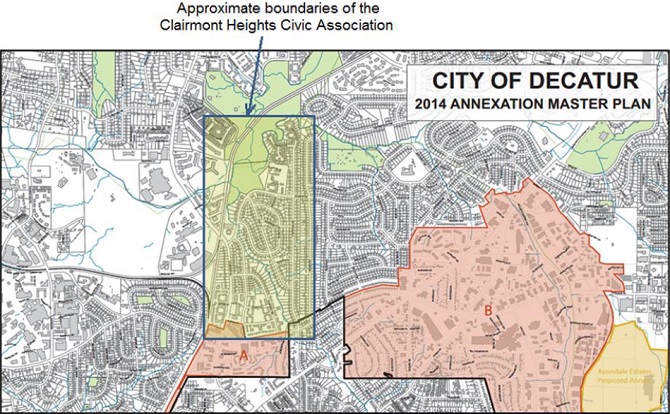 The Clairmont Heights Civic Association has sent a letter to members of the Georgia Legislature asking that they not support the city of Decatur’s annexation plan.

In the letter, Clairmont Heights President Michael Dowling says the annexation will remove $8 million in tax revenue from local schools.

“The City of Decatur intends to annex predominantly commercial property historically and geographically connected to our neighborhood without accepting the adjacent residents and families who support these businesses,” the letter says.

Decatur’s City Commission adopted its annexation master plan on Dec. 15. The plan encompasses 1.6 square miles and includes several commercial areas. The current ratio of residential to commercial property is 85 percent to 15 percent. The annexation plan, if approved by the voters, would change that ratio to 76 percent to 20 percent.

Today is the first day of the 2015 session of the General Assembly.

Here is the full letter from Clairmont Heights:

To our elected representatives in the Georgia Legislature,

The Board of the Clairmont Heights Civic Association writes to protest the City of Decatur’s proposed Annexation Master Plan. We respectfully request that you object to legislation related to this plan during the 2015 session of the Georgia General Assembly.

Our Board feels that Decatur’s planned annexation harms and negatively impacts options for our neighborhood as annexation and city creation efforts in DeKalb County proceed. CHCA conducted a neighborhood survey in September to determine the course of action our residents preferred, and we have done our best to ensure that our opinions would be known and our voices heard as the legislature considers the current annexation and city creation efforts. CHCA officers and individual homeowners consulted with our local legislators and the Decatur City Manager to seek their advice over the past several months. In particular, following the advice we received from our local legislators, neighborhood members carefully pursued the petition process set forth by Decatur. Decatur declined to consider the petitions they had solicited.

The Clairmont Heights neighborhood abuts the City of Decatur (please see map attached as PDF). Our neighborhood students attend Fernbank Elementary School and Druid Hills High School, and Decatur’s proposal would change our contiguous nature to this school community. Specifically, the section designated as Area A would sever Clairmont Heights from the schools that have served it since the neighborhood was developed in the 1950s. Jurisdiction over the intersections involved in Area A is critical to safety, development, service delivery, and traffic issues important to our neighborhood, and our residents deserve a role in future developments in this key location.

The City of Decatur intends to annex predominantly commercial property historically and geographically connected to our neighborhood without accepting the adjacent residents and families who support these businesses. Their proposal would remove an estimated $8 million in annual tax revenue that supports our local schools while simultaneously cutting our contiguous relationship with these schools. Furthermore, the Decatur proposal negatively impacts other efforts our neighbors are pursuing to secure a strong voice for Clairmont Heights as DeKalb communities contemplate future city boundaries.

This intersection and section of North Decatur Road are currently proposed as possible routes for future light rail development. Decatur’s jurisdiction over this area leaves our neighborhood without a voice in a critical transportation issue.

We respectfully request that you object to annexation by the City of Decatur during the 2015 session.

Signed by Board members of the Clairmont Heights Civic Association