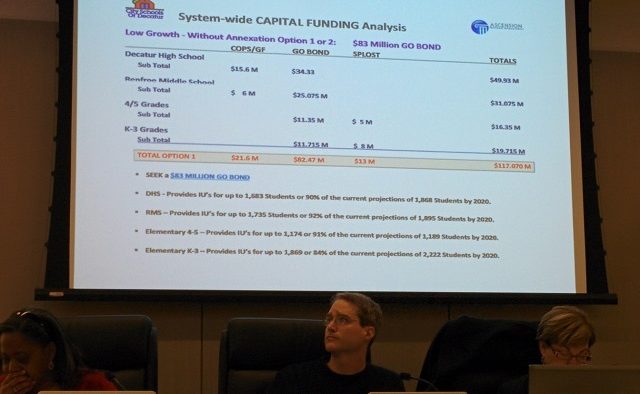 Left to right: School Board members Bernadette Seals, Garrett Goebel and Superintendent Phyllis Edwards listen during a presentation about a bond request for City Schools of Decatur. Photo by Dan Whisenhunt
Share 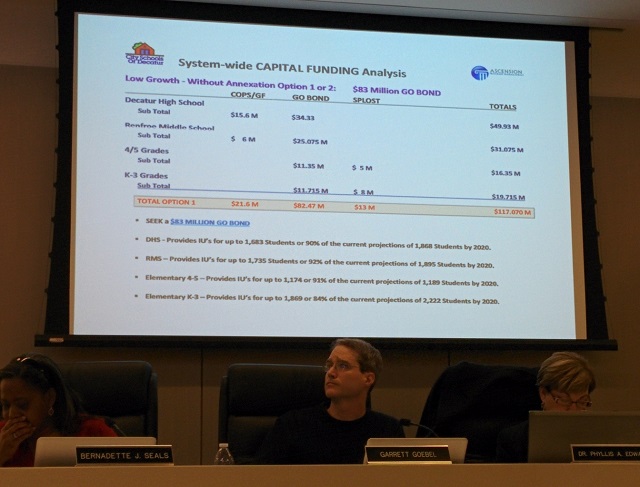 Left to right: School Board members Bernadette Seals, Garrett Goebel and Superintendent Phyllis Edwards listen during a presentation about a bond request for City Schools of Decatur. Photo by Dan Whisenhunt

Sit down. Pull up a chair.

We need to have a serious conversation about the city of Decatur’s debt.

Now, back in February of last year, Decaturish reported that the city has borrowed $154.2 million since 2005. Since that happened, City Schools of Decatur decided to borrow about $18 million more to begin the process of expanding its schools.

So that’s $172.2 million issued by the city and its school system for capital projects, like the Beacon Municipal Center that now houses the City Schools of Decatur Central Office.

It’s all connected, by the way. The city of Decatur backs both municipal and school debts. And there’s a limit.

As the School Board sat in the new municipal center on Feb. 10, they saw the city approaching that limit. The School Board needs to issue even more debt to expand its current facilities. Decatur’s constitutional debt limit is 10 percent of the assessed value of its current tax digest, according to Dianne McNabb with Public Financial Management, an advisor for CSD.

At the end of the School Board meeting, board members unanimously decided they’d ask the Decatur City Commission to put an $82 million bond referendum on the ballot this year. But that would only allow the school system to build out its facilities to accommodate about 90 percent of its enrollment projections. Those projections are for low-growth enrollment without annexation.

“What do we do with the other 10 percent of the kids,” board member Lewis Jones asked.

Why would CSD only ask for $82 million when it needs more to build enough classrooms to meet enrollment projections? Because adding $82 million would bump up against the city’s limit.

“That would get us real close cap,” McNabb told School Board members.

McNabb did not know what the exact cap is at the moment for the city’s debt. The numbers were slippery throughout the Feb. 10 presentation about a potential bond referendum. But it became clear during the meeting that borrowing $82 million was putting the city into a position where it would be unconstitutional to borrow any more money.

That means if CSD asks, and receives, the full $82 million that the city would be hard-pressed to pay for other capital projects.

Are you still sitting down? There’s more.

But while the voters get a say in issuing that debt to expand schools, the majority of the city’s $172.2 million debt – about $108.7 million – required no voter approval. CSD borrowed $18 million in 2014 using certificates of participation. The city schools issued that debt to begin its expansion project at Decatur High and Renfroe Middle. It likely borrowed at a higher interest rate than if the Decatur City Commission had allowed a $59 million bond referendum in 2013 and the voters had approved it. City Commissioners decided against that idea, fearing the consequences if the bond referendum failed.

The consequences of not borrowing more money were equally worrisome for School Board members as they pondered the issue at Tuesday’s meeting.

A consultant’s recent report on enrollment estimates that the city’s school system will grow to 7,398 students by 2020 without annexation in a high-growth scenario. Annexation will add an additional 747 students to the city’s borders.

All of the general obligation bond estimates considered at Tuesday’s meeting envision a low-growth scenario, which predicts a total enrollment of 6,527 students without annexation. The current enrollment is 4,364 students.

School Board members debated a long while about whether it was worth asking for the whole $82 million. They considered two other options: asking for a $75 million bond referendum for a $60 million referendum.

Superintendent Phyllis Edwards suggested there was some wisdom in asking for less. She said the question becomes, “What can we actually get passed?”

Board Member Annie Caiola convinced the board that they needed to start out with a high number. She reasoned that commissioners would inevitably chip away at any number the School Board initially gave them.

“I don’t want to bid against ourselves, if there’s a negotiation with the city,” she said.

There’s always the possibility, she said, that the consultant’s predictions won’t be fully realized and the school system could make do with less. Caiola also encouraged the board to make any decision unanimously. Any disagreement could put the board at a disadvantage, she said.

It was a compelling argument. Eventually board members Julie Rhame and Garrett Goebel, who were leaning toward a lower number, voted yes to give the idea unanimous consent.

Rhame looked troubled by the information she received.

“I’m really concerned in general about the future of our school district,” she said. “We’re going to have to make some really tough decisions and still deliver a quality education for our students … It’s an expensive endeavor and I just hope it’s sustainable for the long term. I’m really concerned. I don’t mean to be dire.”

There is one possibility that would allow the school system to borrow more money beyond Decatur’s current debt limit. City Attorney Bob Wilson said the city could change its charter, essentially its constitution, to decouple the future debt of the city and its school system. That could be done at a legislative level, he said.

McNabb said changing the charter might be inevitable. The city would be weakened if it could not borrow money, she said.

“Given your needs, frankly if these growth assumptions, even the low growth, really is materialized, you may need to look at requesting a change in the city’s charter so you have your own constitutional debt limit,” she said, adding, “Not that you would issue that much.”