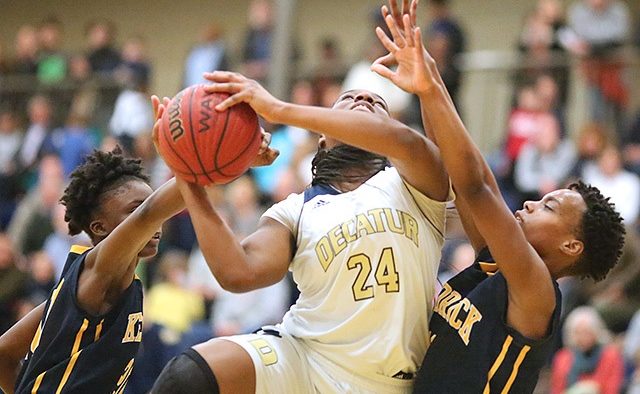 This is Janay Williams grabbing one of her 22 rebounds against Kendrick on Tuesday. Photo by Rick Brozek.
Share 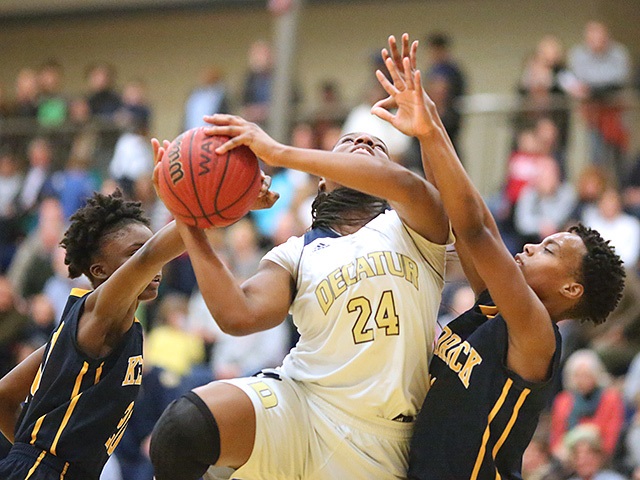 This is Janay Williams grabbing one of her 22 rebounds against Kendrick on Tuesday. Photo by Rick Brozek.

The CSU address is 4225 University Avenue, in Columbus, GA, about an hour and 45 minutes southwest of Decatur. .

There are still seats available on a 55-seat charter bus to the game (with restrooms and WiFi), although they’re going fast.

Seats are available first-come, first-served, for $20 cash per person, roundtrip. The bus leaves in the back DHS parking (behind the football stadium) at noon, though it’s advised you get there by 11:30 am. For more information contact Anita Corbett at [email protected].

Also, funeral arrangements and/or a memorial service for Doc Fowlkes haven’t yet been determined. Doc died shortly after Decatur’s victory over Kendrick Tuesday, collapsing while in his usual seat on the top row behind Decatur’s bench.

Doc and his wife Gwen moved their family of five from Pennsylvania to Decatur in 1959. The five Fowlkes children are Buddy, Eddie, Dave, Jimmy and the late Lynne Fowlkes. In fact, there was a Fowlkes attending, playing sports, teaching and/or coaching at Decatur High from 1959 to 2010. Gwen and Eddie were both with Doc at the game Tuesday night.

The Lady Bulldogs come into Saturday’s game with a 12-game winning streak. If you’re just now catching up with this Decatur team, here are some fast facts:

Coaches: Sarah Coleman is in her second year at Decatur, first year as head coach. Her top assistant is Bill Roberts, who was head coach the previous four years when he went 88-32 and went to the state playoffs each year including one Sweet 16 and one Elite Eight appearance. 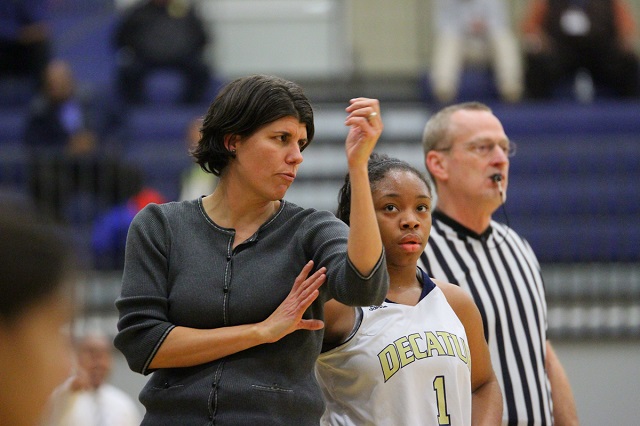 Common opponents: Laney High and Decatur have both played Josey (Decatur won by 16 points, Laney won all three meetings, the last two by 13 points), Westminster (Decatur won by 10 and four, Laney won by 19) and South Atlanta (Laney lost by 16, Decatur lost by two and won by 18).

Historical perspective: Decatur sports teams have won 23 state championships dating back to 1948 when the Georgia High School Association divided schools into two classes and created the first state championships in varsity sports. The Lady Bulldogs won their only basketball state title in 1972, coached by Dennis Greene and led by legendary player, the late Pearl Worrell. You still have to go back to 1982 when Decatur last won a state basketball championship of any kind. That 1982 boys’ team, led by Hollywood Howard, Daryl Gresham and Leonard Shelton, is considered one the great Georgia prep teams of all time.