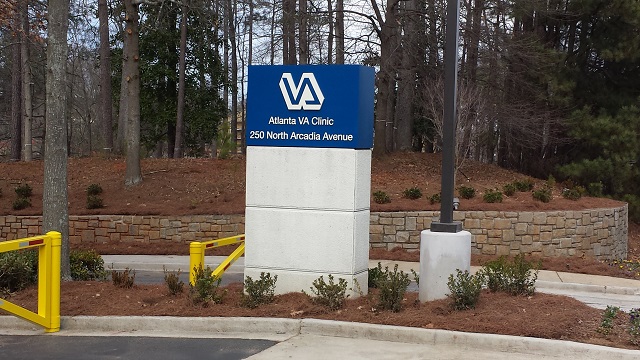 A sign for the new outpatient center of the Atlanta VA. Photo by Dena Mellick

The Atlanta VA Medical Center has opened an outpatient clinic in the city of Decatur on the site of the former DeVry University property.

Patients began visiting the building on Arcadia Avenue in March. The VA Medical Center announced on its Facebook page that the outpatient center will have its official ribbon cutting in July. According to the VA, the outpatient center houses dental offices, a women’s clinic and a radiology clinic. There will be no overnight patients at the clinic.

While the VA welcomes the new addition, some Decatur City officials have been miffed about what became of the DeVry property. During a meeting in March of 2014, when City Commissioners approved amending the site’s master plan, Mayor Jim Baskett was the only “no” vote.

The city wasn’t the only party in Decatur that had hopes for the DeVry building. There’d been talk of City Schools of Decatur taking over that property, but the school superintendent Phyllis Edwards told the Atlanta Journal Constitution last April that the asking price of $17.5 million was cost prohibitive. GP-Govt. Properties I, LLC, purchased the 21 acre property for $7 million.