Decatur’s City Commission will be asked to formally accept the resignation of departed commissioner Kecia Cunningham and possibly name her temporary replacement.

City municipal elections will be held Nov. 3. Cunningham previously announced she wouldn’t run, and suddenly resigned at the last regular commission meeting, citing a new job opportunity. Brian Smith, the current chairman of the city of Decatur’s Zoning Board of Appeals, is running for the job, as is James Johnson, a local attorney.

According to the resolution for the Sept. 8 meeting, commissioners will have to accept the resignation, declare a vacancy and appoint an interim replacement. Commissioners will also elect a mayor pro tempore.

It’s unclear who commissioners might appoint to fill out the remainder of Cunningham’s term. The vacancy hasn’t been advertised and commissioners haven’t sought nominations from the general public. Decaturish left a message with City Commissioners seeking additional information.

“Trammell Crow Residential (TCR) is the developer of the Alexan residential development on Commerce Drive,” the memo attached to the commission agenda says. “As part of its development plan, TCR is to provide a plan for bicycle lanes on Commerce Drive between Clairemont A venue and West Trinity Place and to be responsible for the implementation of the plan between Clairemont and West Ponce de Leon Avenue. The City is to pay for the bike lanes between West Ponce de Leon and West Trinity Place. This project was included in the Alexan development plan approved by the City Commission in February, 2014. The total cost of the improvements is $165,000.”

“The purpose of this memo is to recommend approval of acquiring five greenspaces made available during the City’s tax sale for delinquent properties,” the memo attached to the commission agenda says. “In order to proceed with the acquisition, the City Commission would need to approve the following measures: 1) the cancellation of City taxes owed, 2) the authorization of payment of tax execution costs and other taxes owed, and 3) the filing of tax deeds in the name of the City of Decatur.”

The five properties consist of about 2.1 acres. They are … 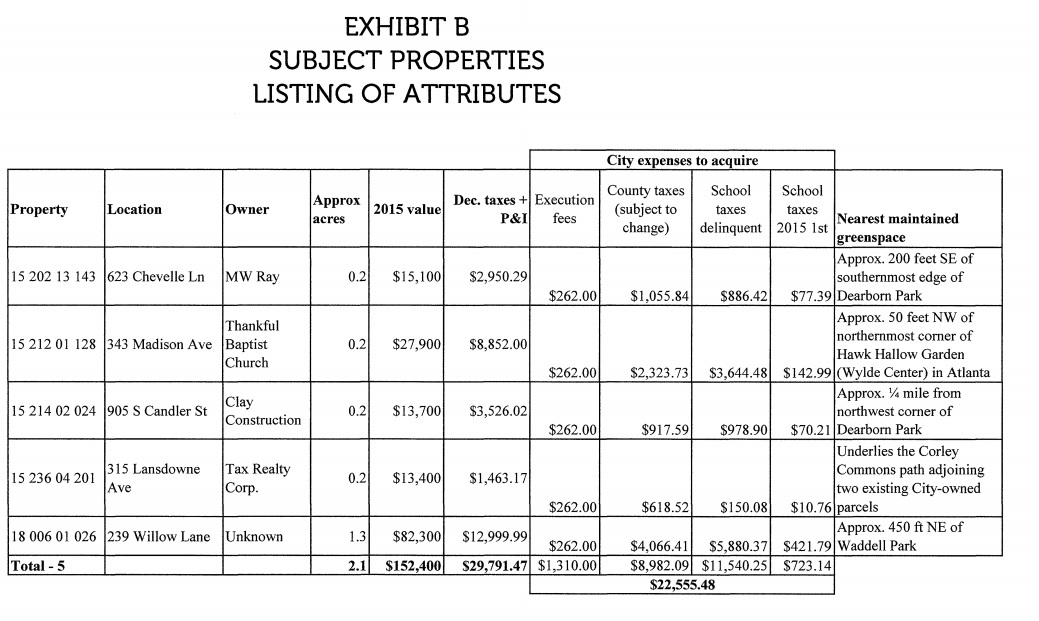 The Sept. 8 City Commission meeting begins at 7:30 p.m. and will be held at city hall, located at 509 North McDonough Street. All meetings are open to the public.