Bridget Anderson, girlfriend of Anthony Hill, talks with a veteran who stopped by the Rise Up Atlanta camp in front of the DeKalb County Courthouse. Photo by Dena Mellick
Share 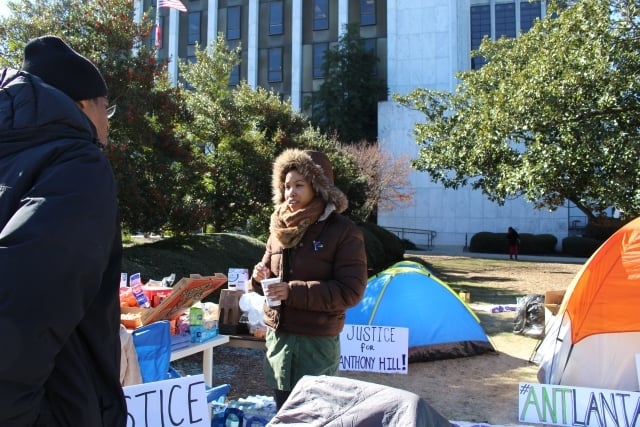 Bridget Anderson, girlfriend of Anthony Hill, talks with a veteran who stopped by the Rise Up Georgia camp in front of the DeKalb County Courthouse. Photo by Dena Mellick

Demonstrators are camping out in bitter cold temperatures, awaiting to hear if a grand jury indicts the DeKalb County police officer involved in the fatal shooting of an Air Force veteran last year.

The organization Rise Up Georgia set up tents on the front lawn of the DeKalb County courthouse in Decatur Monday evening. The group plans to stay there through Thursday, Jan. 21, when District Attorney Robert James’ recommendation for the criminal indictment of Officer Robert Olsen will go to the grand jury.

“We are out here for many reasons – one to say that mental illness is not a crime,” said Nelini Stamp of Rise Up Georgia.

Anthony Hill, 27, was naked and unarmed when he was shot and killed by Olsen outside of his Chamblee apartment complex in March.

Protesters filled the streets of downtown Decatur days later. The District Attorney’s office presented the case to a grand jury for a civil review in October. The grand jury recommended further investigation in the case. 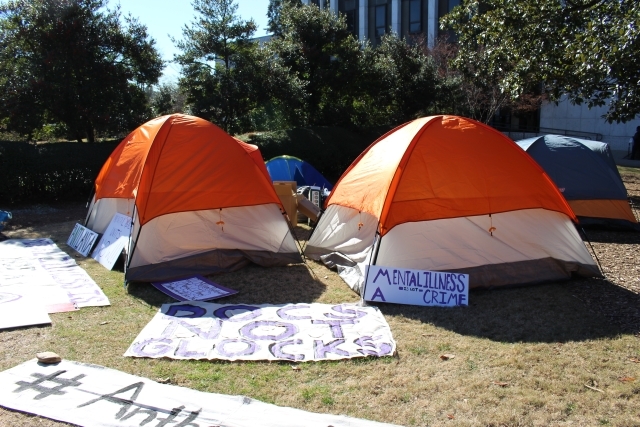 Rise Up Georgia set up tents and is camping outside ahead of a criminal indictment being sent to a grand jury on Jan. 21 in the officer shooting death of Anthony Hill. Photo by Dena Mellick

Anderson said Hill was always upfront about his illness. “He was never harmful to me or anyone else,” she said. “He is the sweetest man I’ve ever known.”

Anderson said Hill was experiencing his first bipolar episode when he was shot by Officer Olsen.

“We’re talking about the intersection of race and mental illness, and we hope people become aware of that and start to advocate for that,” Stamp said.

Stamp said the group has been maintaining a 24-hour presence at the courthouse, working in shifts. She said 15 people slept in the tents overnight.

Signs surrounding the tents state, “mental illness is not a crime” and “docs not glocks.”

A man who introduced himself as a veteran stopped by the tent camp and told Anderson that he too has PTSD.

He explained how a medication change caused him to act out of the ordinary, and he was embarrassed to find himself urinating outside at one point.

“Every time I hear it on the news, I can imagine what that young man was dealing with,” the veteran told her. Anderson thanked him for sharing his story.

Anderson told Decaturish she used to be really angry about what happened to Hill and hated all police for a while. But she said she realized Hill wouldn’t have wanted that reaction.

“He still had faith in police officers,” Anderson said. “He did an internship at the Sheriff’s Office after high school and before college. It’s not like he was some belligerent guy.” Rise Up Georgia Darrick Lindsey, Bridget Anderson, and activist Prohaize with Justice Trail stand in front of the Rise Up Georgia camp in Decatur. Photo by Dena Mellick.