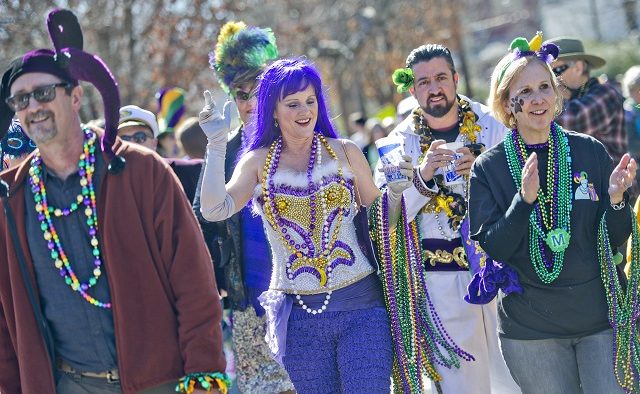 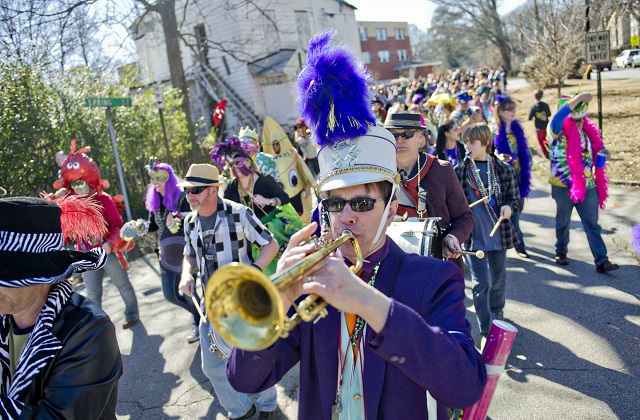 Bo Emerson (center) plays the trumpet as he marches down Oakview Road during the 2015 Mead Rd Mardi Gras parade. Photo by Jonathan Phillips

There will be face painting and float decorating at Fifth Avenue Elementary on Oakview Road starting at 12 p.m. on Saturday, Feb. 6, according to a press release.

The parade then gets under way at 2 p.m.

The procession will march up Oakview to Mead Road and then go to The Imperial. The restaurant is offering a special Mardi Gras menu of red beans and rice, gumbo, and jambalaya.

The press release said, “There will also be student musicians rocking the house. Proceeds from food and beer sales will support Decatur Education Foundation music grants for the Decatur City Schools.”

You can see Decaturish’s photos of the event in 2015 here.

A Krewe application for the parade notes no motorized vehicles can take part. Marchers can ride bikes, skateboards, and roller skates. Floats can be made from wagons or soap box derby cars. The application can be accessed here: MRMG 2016 Krewe Application. Organizer contact info can also be found on the Krewe application.

Kirkwood announced it is holding a Mardi Gras parade this year as well. Lanta Gras will take place Saturday, Jan. 30.