Regarding Greg: Injured cyclist focuses on the big picture

Regarding Greg: Injured cyclist focuses on the big picture 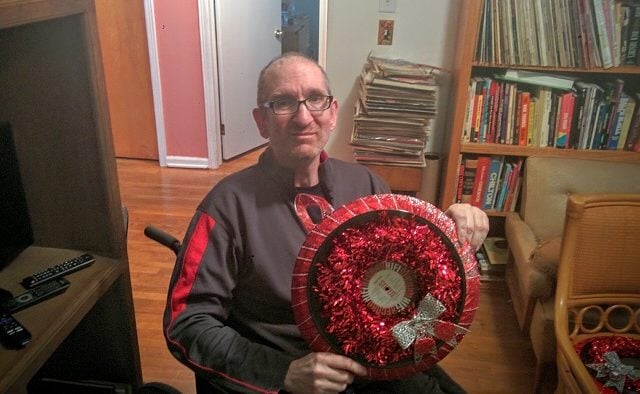 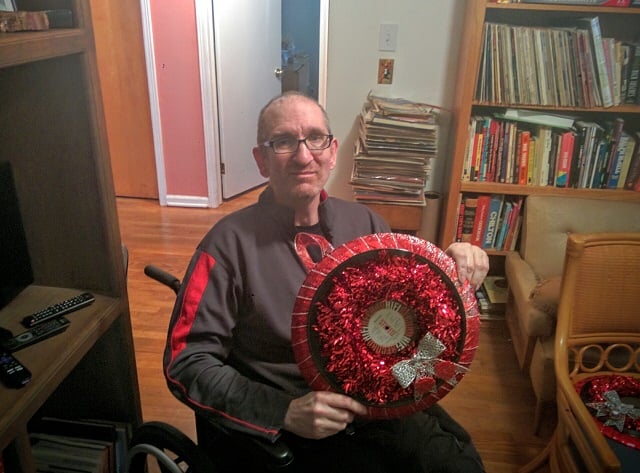 Greg Germani holds up a wreath made out of a vinyl record. Photo by Dan Whisenhunt

Greg Germani has been back at home now for over a year. He lives in a single story brick house in the greater Decatur area. A more recent addition is the wooden ramp leading up to his door.

On Dec. 17, the one year anniversary of his discharge from the hospital, Germani dozed quietly in his wheelchair. Decaturish dropped by that afternoon to check in.

Germani slowly lifted his head and cracked a slight smile. “Better than I look.”

He’s come a long way. In June 2014, Germani was riding his bike home from work when he got into an argument with a man driving a red Dodge Nitro, Joseph Alan Lewis. Following the argument, Lewis came back and hit Germani with the vehicle, leaving him for dead.

In October, Lewis pleaded guilty to some of the charges related to that incident and was sentenced to 15 years in prison. The judge called the crime “one of the saddest, most senseless things I’ve ever seen.”

His days are a grind of therapy mixed with a flow of visitors and family members who continue to help him with his recovery.

“It is better to be doing better than I was then,” Germani said. “I was going pretty slow for a while.”

Germani focuses on his passions, his love of old time country music and odd ball photos.

“One of my all-time favorites is a guy named Carl Butler,” Germai said. ” … He was a hardcore honky tonker and in the 1960s he and his wife Pearl put out some albums and there’s all kinds of great love-gone-wrong songs in there.”

Over the holidays, Germani and his girlfriend Beth Harrill took some of his old records – the duplicates and the ones that were broken – and began turning them into Christmas wreaths.

The wreaths have been on sale at Kavarna and Firehouse Guitars. When Germani ran out of records he felt OK parting with, Second Life in Avondale Estates donated some that the thrift store couldn’t sell.

“We’ve made a nice little chunk of change that will go a long way toward putting on a great music show in the spring,” Harrill said.

Germani has some definite ideas about who he’d like to see play at his show. He holds a high opinion of singer-songwriter Chris Scruggs.

‘We’ve had a couple of benefits on my behalf, and I’ve learned as a music fan sometimes to get the show you want to see, you got to stand up and make somebody an offer,” Germani said. “That’s worked real well for me.”

If he were to win the lottery, Germani said he’d like to buy a radio station and play old time country music.

“I’ve got so damn many records and it frustrates me a little bit that there’s no country oldies station available to us around here,” Germani said, adding, “I’d like to devote countless hours to trying to get one going.”

“I know your friends would be on board with it,” Harrill said.

He said he’d also like to continue working on his Atlanta Time Machine website which publishes “then and now” photos of the city.

“I’ve got a lot of photos and I keep looking around and find more photos,” he said.

These things keep him busy. They keep him happy.

“I’ve had some down spots lately, that’s for sure,” Germani said. “But you know I’m a big looker at the big picture and I see people sometimes who have unbelievable hardships to deal with and they just go about their day and that’s what I try to do, is remember that yeah, sometimes it’s a tough thing I’ve got to deal with but, all in all in life, I’ve had it pretty damn good.” 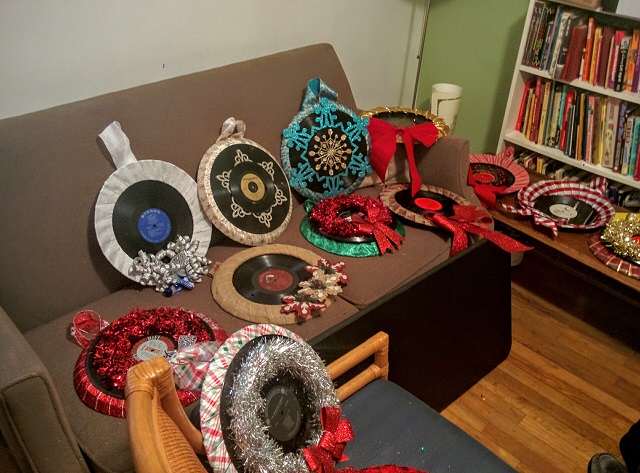 A collection of wreaths made from vinyl records displayed in Greg Germani’s home. Photo by Dan Whisenhunt

Editor’s note: A benefit for Greg Germani will take place at the Star Bar at 437 Moreland Ave. NE on Saturday, Jan. 16 at 8 p.m. Details can be found on the Facebook event page.