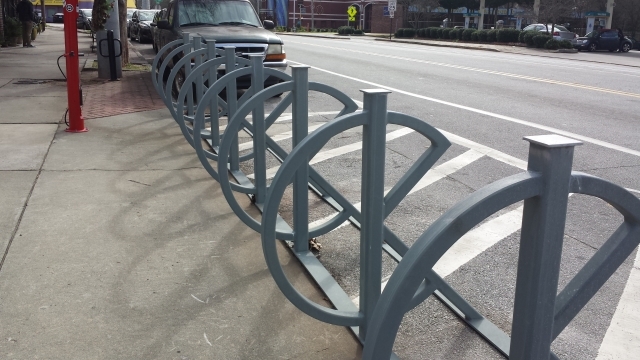 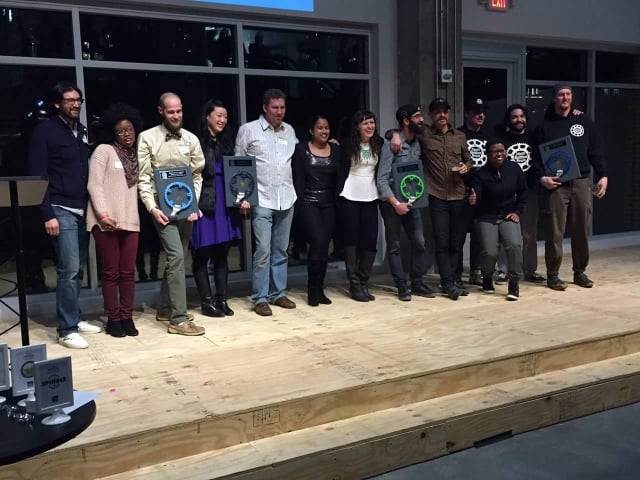 Kirkwood and members of the Kirkwood community won several Blinkie Awards from the Atlanta Bicycle Coalition. Photo provided to Decaturish

The Atlanta Bicycle Coalition (ABC) has honored Kirkwood with an award for being a bike-friendly neighborhood. The award was presented during a ceremony on Feb. 12.

ABC highlighted the work of resident Carl Holt saying, “Last year he pulled together support from the Kirkwood Neighbors Organization and local businesses including Le Petit Marche and The Pullman to install a high capacity bike corral and a Fixit Stand.”

ABC said on its website, “The new bike racks are the perfect complement to the bike lane, which measures among the city’s longest, extending from East Lake to Edgewood, and providing great access to Kirkwood Station right in the middle.”

Kirkwood Neighbors’ Organization President Geoff Mueller and Holt were on hand to accept the award. Holt told Decaturish, “It was a proud moment for Kirkwood.”

He said, “Three of the four awards handed out that night had representatives who live in Kirkwood. [The] Local Bike Initiative [award] was won by Civil Bikes, owned and operated by Kirkwood resident Nedra Deadwyler. [The] Bike-Friendly Business [award] was won by The Spindle, a bike apparel shop owned by two brothers. Ezz-Eldin Hassan lives in Kirkwood with his wife and son.”

Holt added, “Kirkwood looks to continue its bicycle improvements, with the passage of the 2016 NPU-O Bicycle Plan and becoming a future Bicycle-Friendly Business District. All this is possible because of the commitment from the residents of Kirkwood to alternative transportation.”