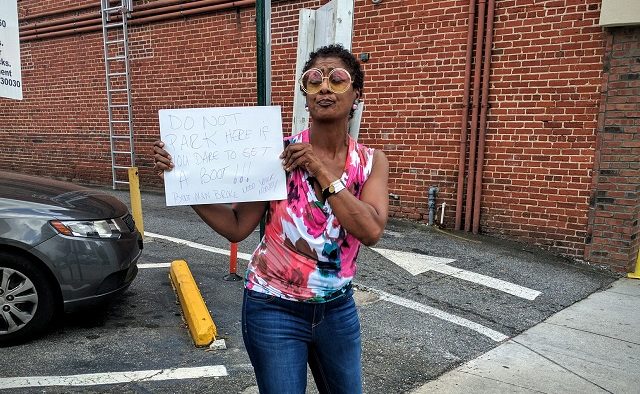 She said her name is Ms. Rambo. During the afternoon of May 10, she stood on the public sidewalk in front of a paid parking lot near City Hall and held a sign.

It said, “Do not park here if you dare to get a boot! Boot man broke. Need your money.”

Rambo said she paid to park her vehicle in the lot, but the attendant didn’t see the ticket in her vehicle’s dash board. She got a boot. Two other ladies who had paid to park there got a boot as well, she said. Decaturish heard one of them arguing with the booting company on her cell phone shortly before Ms. Rambo arrived with her sign.

The cost of removing the boot from her vehicle? $95.

It’s a common story in Decatur these days. Private lots that were once loosely monitored have now become lucrative targets for booting companies. But the booting companies say they are rectifying a longstanding problem of people parking in private lots and visiting businesses that are off site.

Sometimes police officers are called in when there’s a dispute, but there’s little they can do for people who have been booted  on private property.

The complaints about booting prompted city officials to consider implementing a $40 cap on booting fees. City Commissioners tabled that idea after representatives from one booting company said the lower fees would make it difficult to make money from their parking enforcement contracts.

Some City Commissioners, business owners themselves, were sympathetic to the parking company’s concerns. City Manager Peggy Merriss said there’s been a pattern of “predatory” behavior by parking attendants.

Assistant City Manager Lyn Menne recalled one incident where the person parked their car, attempted to pay at the pay station with a credit card, but had to leave to get money from an ATM because the credit card machine was broken. When the person returned, they found an enforcer had slapped a boot on the car and was willing to remove it for a hefty fee. The parking enforcer was carrying a working credit card machine, just in case the person who got the boot didn’t have cash on them.

In the meantime, people like Rambo are fighting back anyway they can.

“Don’t park here. Don’t park here, brother,” she said to driver passing by the lot. “He puts boots on your cars. It’s worth the walk. Get your exercise for the day. Do your heart some good.”