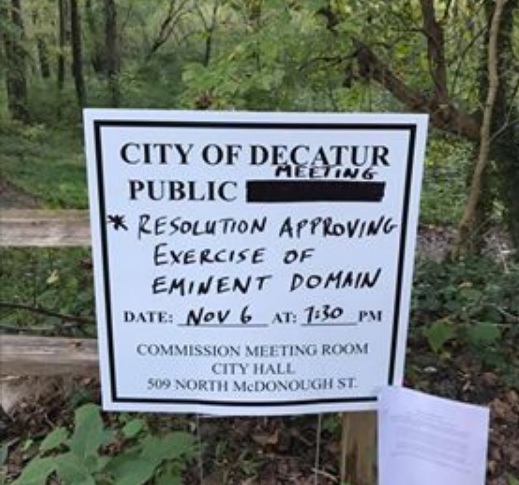 A notice of a condemnation hearing. Photo provided to Decaturish

The city of Decatur has announced plans to use eminent domain to take property away from an owner who wants to develop several lots near Dearborn Park.

At a meeting on Monday, the city’s Zoning Board of Appeals tabled a variance request from developer Neal Hightower with Kudzu Capital LLC. At issue is a nearly 4-acre proposed development site at West Dearborn Circle and Chevelle Lane. Kudzu Capital LLC purchased the land in June 2016. The property is divided into 16 lots, but does not have a road that provides easy access to the lots. Kudzu filed for a variance from the requirements of the city’s Unified Development Ordinance to allow for a private driveway onto the property.

The property has not been previously developed and has a rugged terrain. It is also adjacent to the county-owned Dearborn Park, which is a 7-acre green space with a nature trail and a creek running through it.

The property has been a point of contention for nearly two years. In December 2015, Decatur City Commissioners voted to pay $500,000 to buy the land with plans to expand the park. The city discovered later that the property was already under contract with Redwater LLC, another company affiliated with Hightower. Redwater filed a lawsuit against the previous owner to resolve the issue, and the purchase was completed in June 2016, according to documents filed with the city.

On Tuesday, several readers notified Decaturish a sign about a public hearing regarding eminent domain had been placed on the property.

Mayor Patti Garrett confirmed the city is pursuing condemnation to keep the property from being developed.

“As we have mentioned over the past few months/years – obtaining this property and maintaining the City’s green space was a priority of the City Commission,” Garrett said via email. “Signs were placed on the Kudzu Capital/Hightower property [Tuesday] regarding a City Commission meeting on November 6th. The signs announce that the City Commission will consider a ‘resolution approving exercise of eminent domain.’ These signs indicate the start of the formal proceedings for the City to obtain the property through eminent domain (i.e., condemnation).  It’s my understanding that the next step is for the City Commission to consider the resolution on November 6th (the court case will then be filed in a little over 30 days.)”

When asked for a comment, Hightower said he found out about the plan to condemn the property via social media.

“I just found out about the Eminent Domain sign that was put up from a Facebook post last night. I’ve not yet been served,” he said. “I’m not sure why the city waited two years, caused thousands upon thousands of dollars to be wasted on both sides and aggravated myself, the development department, the ZBA and the neighbors only to exercise this right now, but it is what it is. I did want an opportunity to thank not only the ZBA but the hundreds of people who came out Monday and stayed late into the night to respectfully express their feelings on the matter. It’s that kind of solidarity and passion that makes Decatur such a wonderful community to live and work in.”