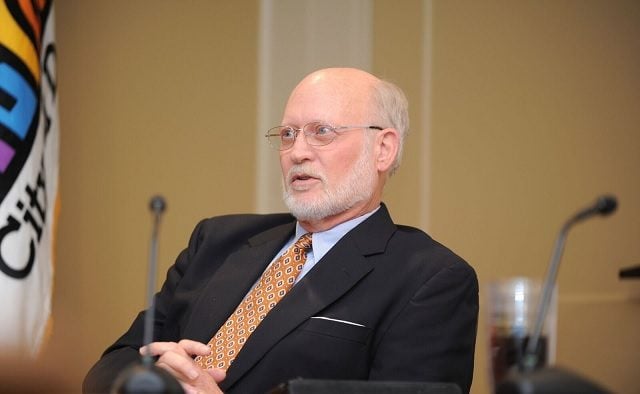 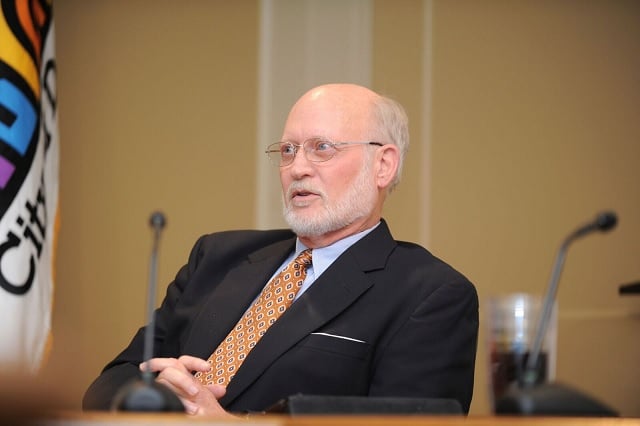 After all regular business concluded in last night’s Decatur City Council meeting, there was one more item left on the agenda, simply marked “Other.” The council proceeded to take out boating caps and don them in a tribute to outgoing Mayor Pro Tem Fred Boykin as he sails into retirement.

Boykin had announced at the beginning of the year that 2017 would be his last after 26 years of service to Decatur. With his child now enrolled at the University of Georgia and his long-standing bicycle business Bike South sold off, the 67-year-old has decided to retire and enjoy other things in life, like his 42-foot trawler boat.

“I’ve always liked boats and the water,” Boykin said. “This one’s big enough to live on if I want, and I just might.” 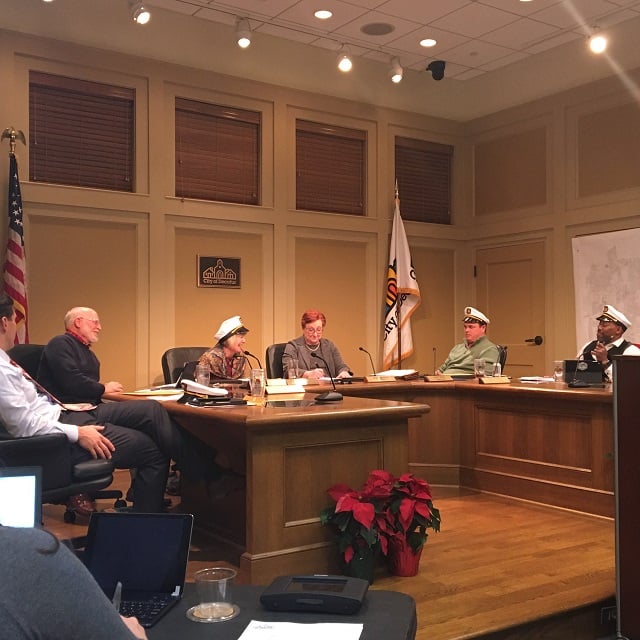 In a humorous send off to long-time Commissioner Fred Boykin, the Decatur City Council donned boating caps as Boykin “sails off” into retirement. Photo by Gabriel Owens

Boykin will be replaced by Kelly Walsh, who won the recent municipal election to fill his seat.

The Shreveport, La., native has been a Decatur resident since the late 60s when he moved here to attend Emory University, and opened Bike South in 1971 while in his sophomore year. In 1991, he was persuaded to join the Business Association after much encouragement from friends and local leaders.

From there he bounced around to the Planning Commission, the Zoning Board of Appeals and the Library Board before he finally ran for and won a city commissioner position in 2000. He has additionally served as the Mayor Pro Tem for the last two years.

Reflecting on his time as commissioner, Boykin was proud of many of the improvements and changes to the city he championed. He worked to connect the city’s bike and walking paths to sidewalks from neighborhoods and ultimately to the city’s schools. That meant more students walking and biking to school instead of taking the bus. It was also part of a larger initiative to fight childhood obesity.

“The sidewalks were often unconnected, leftovers,” Boykin said. “A new subdivision would come in and there were no attempts to [reconcile the issue].”

The effort started in 2000 and has changed the way residents get to school.

“There are seniors graduating this year that started in Kindergarten here that have never ridden a school bus to school,” Boykin said.

However, he admits his career wasn’t all success. Two of the issues he said he wished he could have done more about include the loss of affordable housing (“something we are still wrestling with”), as well as the city not setting aside enough areas for green space when it bought property.

“We just didn’t think about it,” said Boykin. “Wish we had.”

While Boykin is still unsure on his exact future past the council, he said he’s sure he will spend quality time with his wife and child, and boating will be involved. After all, now he has a nice collection of sea captain hats.