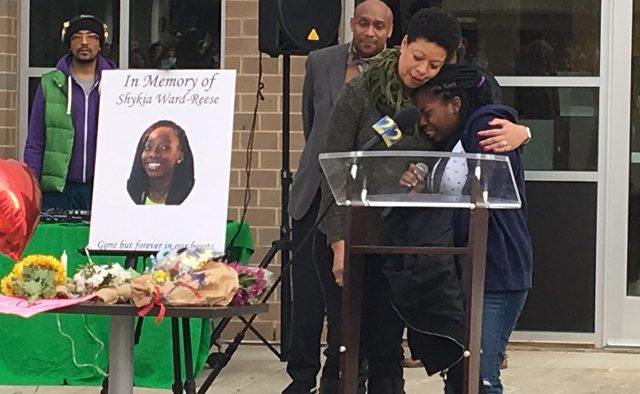 During a candlelight vigil for slain Shykia Ward-Reese, her best friend breaks down in tears during a tribute to Ward's memory last night at the Beacon Municipal Courtyard. Photo by Gabriel Owens
Share 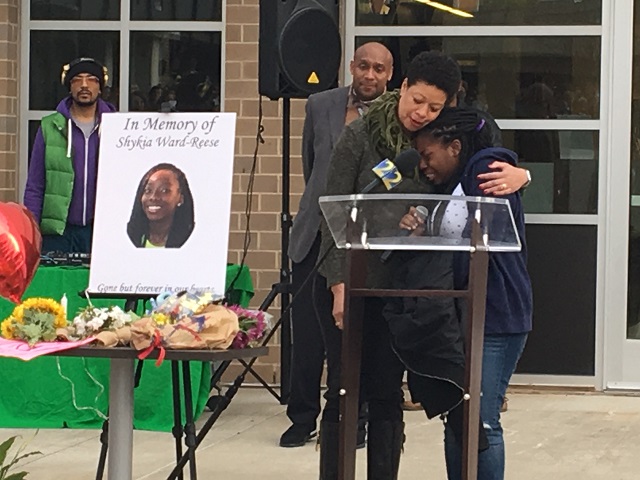 Shykia Ward-Reese’s best friend breaks down in tears during a vigil held on March 27. Photo by Gabriel Owens

Decatur residents turned out for a candlelight vigil to honor Shykia Ward-Reese, a 14-year-old Renfroe Middle School student who was murdered on Sunday morning.

Her alleged killer and uncle, Royce Stewart, has been arrested. He is accused of fatally stabbing Ward-Reese and her mother’s boyfriend, Manuel De Jesus Franco, on March 25.

The vigil took place at the city’s Beacon Municipal courtyard. The community showed up in force. Friends, families, teachers and others whose lives were touched by her’s, spoke kind and loving words about her smile, personality, and how she will be missed.

“She never got to go to high school, or prom,” said one friend. “None of the things she was looking forward to in her short life. But she’s with God now, and watching over us.”

In addition to her mother, Ward-Reece leaves behind a younger sister.

For over an hour, speakers stepped up the podium to share memories of Ward-Reece. Before long, a picture was painted of a sharp, quick-witted young woman with a heart of gold.

One teacher described her as “sass with class,” who could make getting up to sharpen her pencil an event, with dance numbers and a big smile. She showed compassion for others, never hesitating to loan lunch money to a friend who’d forgotten theirs.

She was a member of the track team and band, and was a middle school cheerleader who wanted to be a high school cheerleader. Ward-Reese had friends throughout Renfroe and in the wider community. Friends from Stone Mountain, where she used to live, spoke about her, joined by cousins and her god sister.

The procession of baby-faced 13 to 15 year olds at the vigil was a stark reminder of how young 14 really is.

The student laid a set of pom poms on the podium. “I just wanted Shykia to know, she made the team, now and forever.”

The event concluded with candlelight prayer for Ward, while members of the audience released dozens of balloons into the sky.

A go fund me page has been created for covering Ward-Reese’s funeral expenses, and has raised more than $20,000.