DeKalb County Commission recently announced that all county residents can expect a tax cut this year and cities – Decatur in particular – will benefit the most.

At the same time, the city of Decatur is contemplating a millage rate increase to help pay for the $40 million it borrowed to buy the former United Methodist Children’s Home campus.

All residents are paying more in sales taxes this year at a rate of 8 percent.

Under the old formula a penny HOST tax was divided into two categories: 80 percent went to tax breaks for property owners and 20 percent paid for infrastructure projects. But as new cities formed, they received more and more of the 20 percent set aside for these projects and the county received less. County voters approved changing that formula last year. Now EHOST goes directly to property tax relief and the extra penny pays for capital projects, like road paving.

But cities like Decatur benefited greatly from the new arrangement. That’s because cities tend to rely on the county less for basic services, like, sanitation, police and fire, Decatur Mayor Pro Tem Tony Powers said. 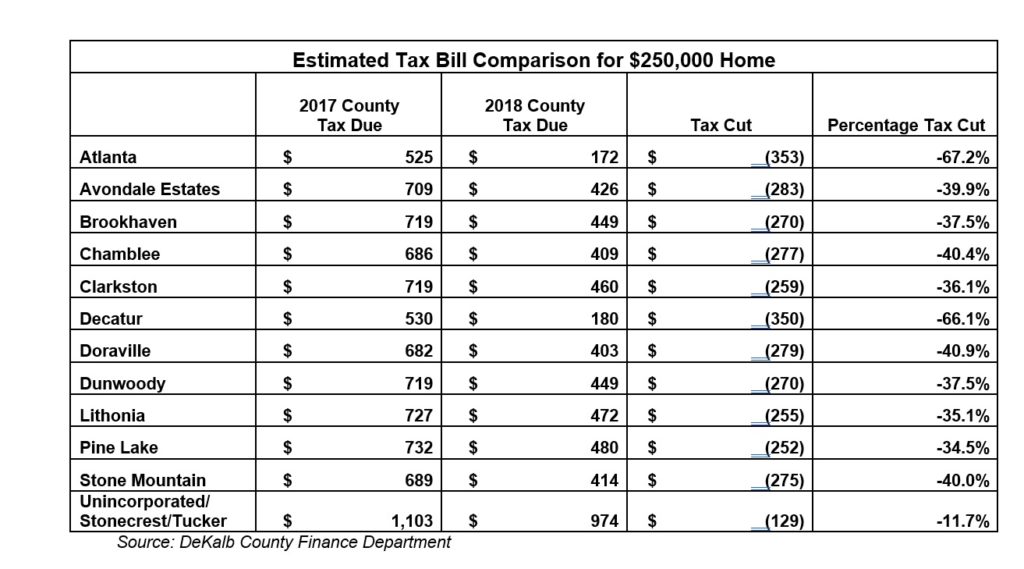 “In order to meet scheduling requirements, the tentative millage rate was adopted prior to receipt of the 2018 property tax digest from DeKalb County, using a 6 percent estimated digest increase,” the city said in a press release. “On May 24, 2018 the City received the 2018 real property tax digest, which reflected an increase of 8.9 percent over the value of the 2017 tax digest. Just over 36 percent of the increase is due to new property value, not reassessments. Based on the 2018 tax digest from DeKalb County, it will be recommended that the final 2018 millage rate to be considered on June 18, be reduced from the tentative millage rate of 13.98 to 13.62 mills.”

City Schools of Decatur is not changing its millage rate. It will remain 18.66 mills. Due to the overall increase in the tax digest, this is still considered a tax increase, however.

Decaturish has asked city officials to provide an estimate of how property owners in Decatur will fare with the simultaneous tax cut in the county and tax hike in the city, taking into account the increase in property values. This story will be updated when the city responds.