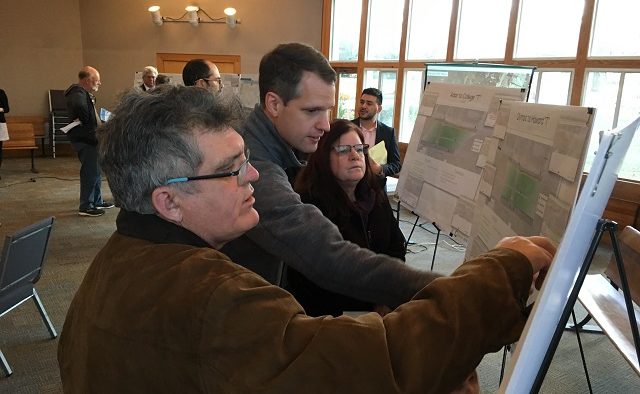 Bruce Tarnopolski, Jacob Ziliak, and Gale Tarnopolski considering the merits of one of the plans presented at the Jan. 16 input meeting. Photo by Sara Amis
Share

The city of Decatur on Jan. 16 held the second of three workshops on proposed improvements to the Atlanta Avenue railroad crossing.

Ideas from the original open house held on November 15 were presented for evaluation.

Benefits and drawbacks of each plan were presented, including dollar signs to indicate estimated cost, along with information about traffic patterns including pedestrian and bicycle use.

Around 70 people came to the first open house in November voice their ideas. Suggestions ranged from re-aligning the roadway to lessen the sharp angle at which two adjacent roads cross the tracks to just closing the crossing completely.

Prior to the first open house, the city commission approved borrowing $5.09 million for the improvement project. The funds come from a sales tax approved by voters in 2017.

The crossing is one of the trickiest traffic puzzles in the city, with small segments of Atlanta Avenue and Adair Street crossing busy West Howard Avenue and then immediately meeting in a ‘V’ just north of the track. Each segment has a separate traffic signal allowing traffic to cross southbound to head east or west along College Avenue. Drivers coming east or west from College to Howard must navigate a confusing sequence of traffic lights and crossing signals. 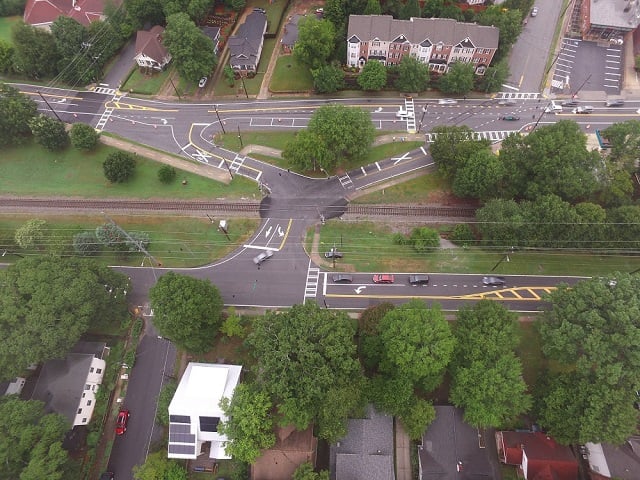 The Atlanta Avenue railroad crossing. Photo provided by the city of Decatur.

Complicating the issue further, is the presence of a segment of the Stone Mountain PATH trail that runs parallel to the tracks along Howard and must cross both segments of Atlanta and Adair at that crossing. The crossing is also a designated Safe Route to School, but students must navigate several pedestrian crosswalks on Howard and College and the grade crossing to get to the 4/5 Academy at Fifth Avenue, Renfroe Middle School and Decatur High.

Any changes made will also have to go through layers of approval from both public and private entities. Howard Avenue is a county road and College Avenue is a state route. And, of course, CSX owns the railroad tracks and right-of-way.

Plans range from keeping the present geometry, which is probably the least expensive, to a triple roundabout, which is likely the most expensive.

But Bruce Landis, of the civil engineering firm Landis-Evans & Partners, cautions that the estimated price tag isn’t the whole story.

“That’s just a guess at a capital cost, that is not operational cost,” he said.

Other considerations include safety, convenience including delays caused by congestion, and costs created by people avoiding the intersection.

Landis said the eight possible plans were developed based on community feedback from the first workshop about the “challenges, concerns, and problems” of the Atlanta Avenue intersection.

“What we’re doing at this second workshop is allowing residents to weigh in on the concepts,” he said. “We’re also meeting with what we call agency stakeholders, that’s Georgia Department of Transportation, CSX Transportation, area school principals, the police department, emergency medical services. We will do a very similar meeting with the agency stakeholders tomorrow and get their feedback.”

As of yet there’s no clear favorite among the various plans, but Landis hopes to narrow them down to a manageable few for more in-depth study.

“For the emergent most optimal ones from the community standpoint, we may do traffic signal analyses for actual delay, traffic cues, things of that nature,” he said. “But at this stage we want to get people’s feedback for the benefits and the drawbacks, the bigger picture.”

The situation is complex because of competing  interests.

“We want to solve today’s problems, but we also want to anticipate tomorrow’s,” Landis said. “Someone’s convenience becomes another person’s problem in some cases.”

Jacob Ziliak who lives on Howard near Adair came with his two small children.

Ziliak hopes the city goes with the plan for an H-crossing east of the present intersection, “because that would work best for me.” 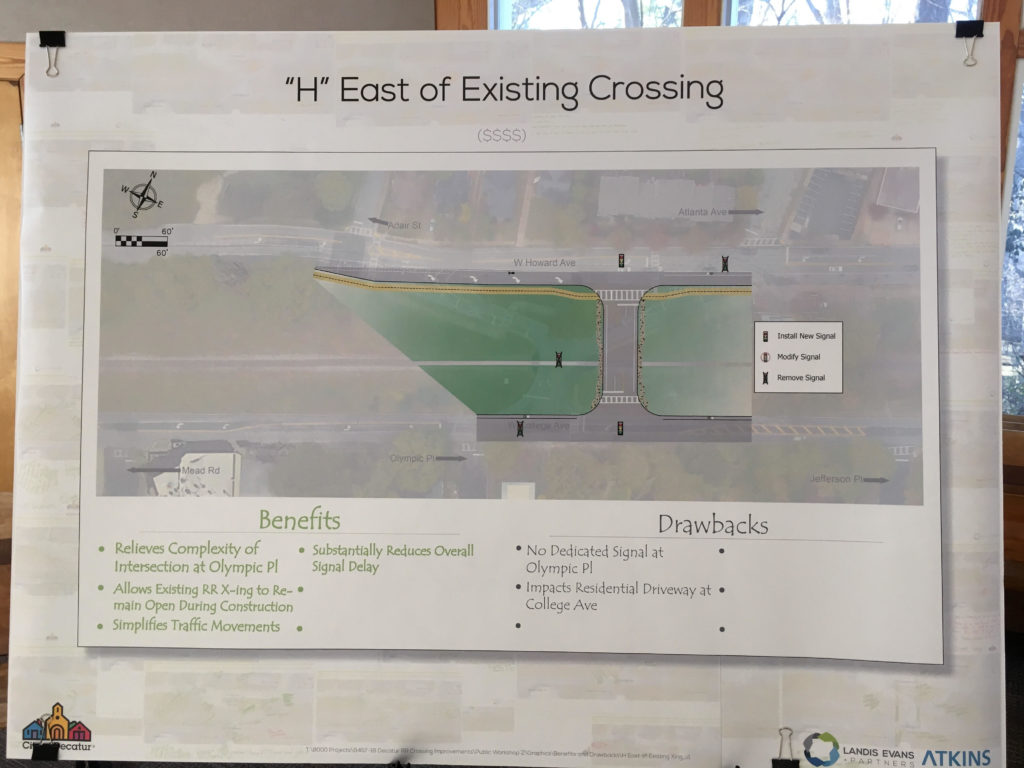 A photo showing the H east of existing crossing option.

Gale Tarnopolski attended the first meeting and came back with her husband Bruce.

They live on the other side of the railroad tracks, on Olympic Place.

“It’s a dead end over there,” Gale said. “We have no other way to get out of the neighborhood.”

Gale said she and her husband walk more now they are retired, but for commuters, “The real crunch is rush hour. I would leave for work an hour early just so I didn’t have to fight the intersection.”

Gale and Bruce Tarnopolski favor the “Olympic to Howard T” plan which would place a light in front of Olympic Place.

“They’ve done an excellent job of communicating, “ Bruce Tarnopolski said. “I appreciate the empirical data.  Even if I don’t get the result I’m hoping for, I can see why they made the decision.”

Information about the proposed concepts will be available January 17 on Decatur’s Open City Hall.  The public is invited to comment by February 1, and a third workshop is planned for late February/early March.

Here are photos of some of the other concepts discussed at the Jan. 16 meeting: 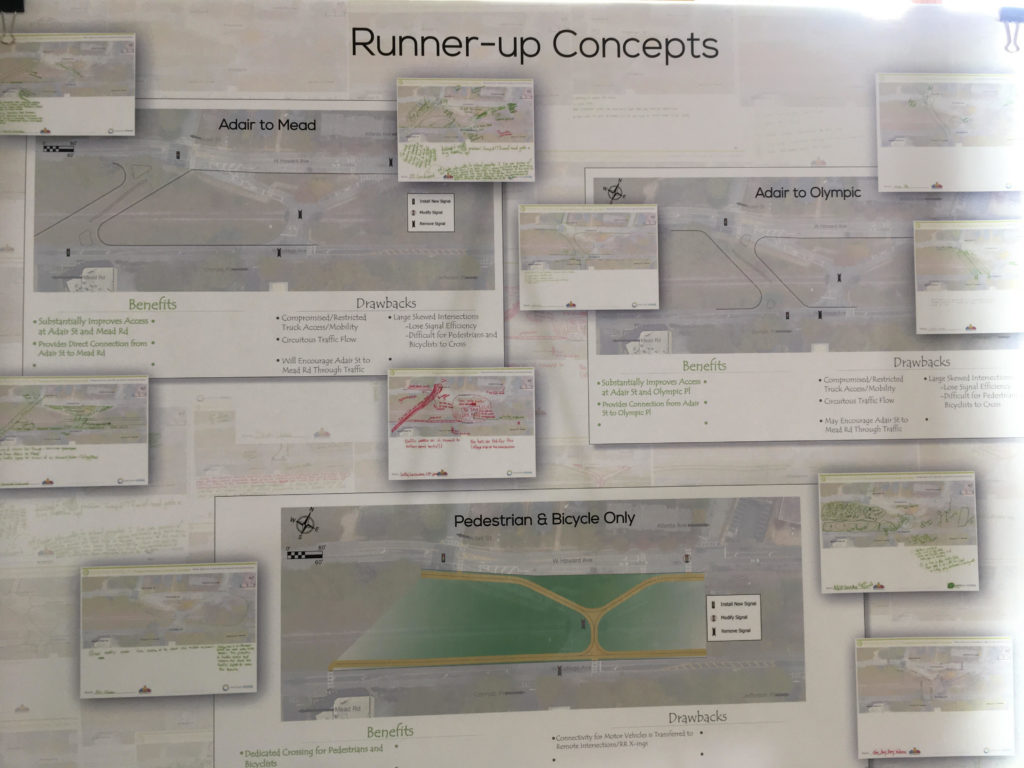 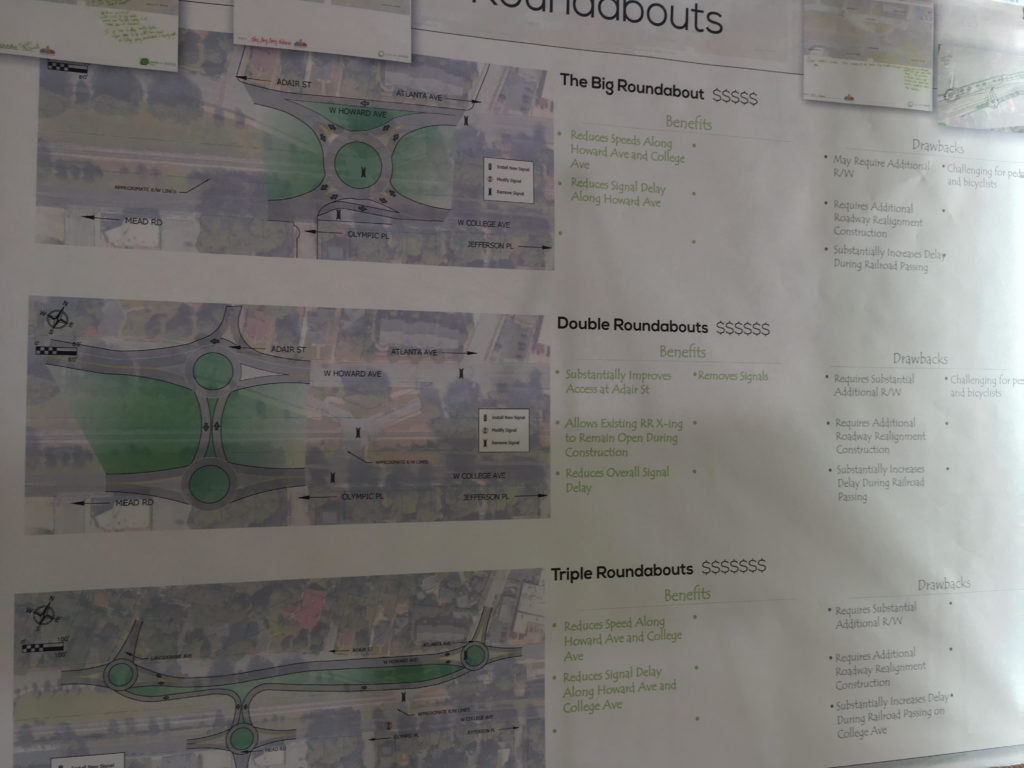 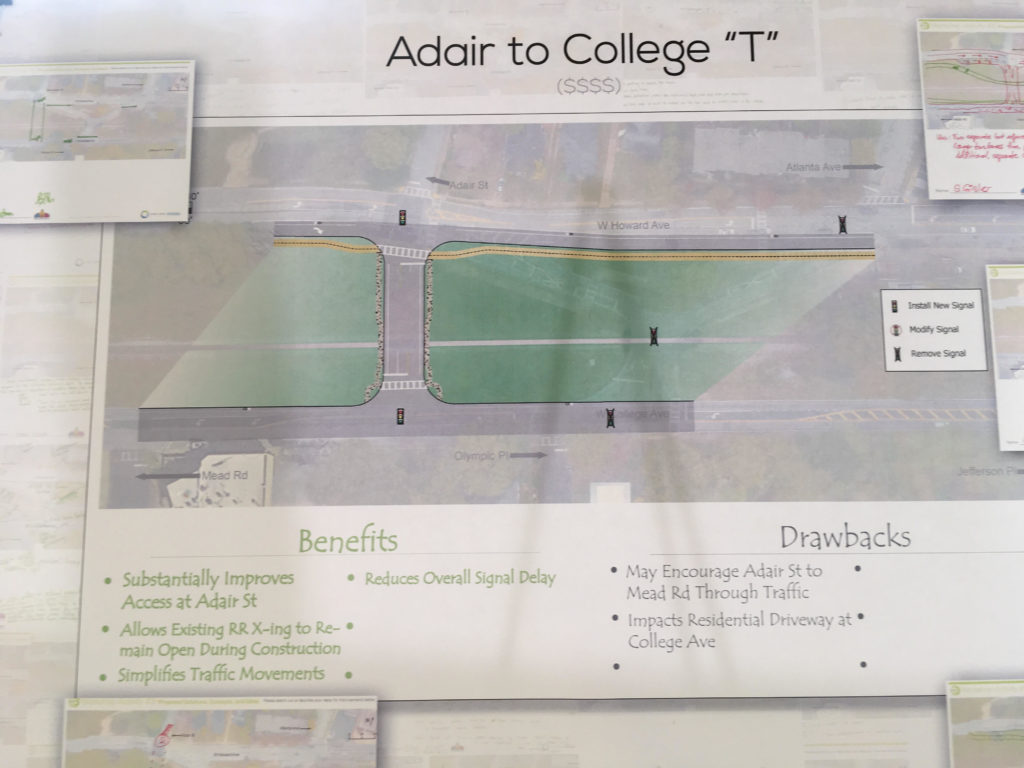 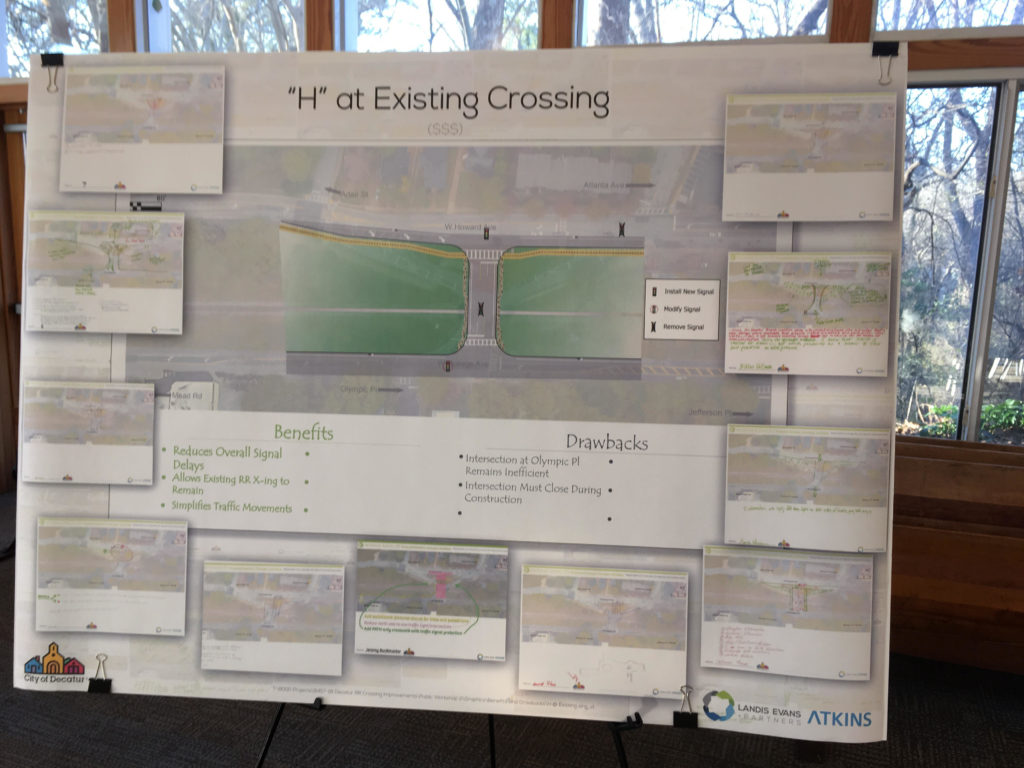 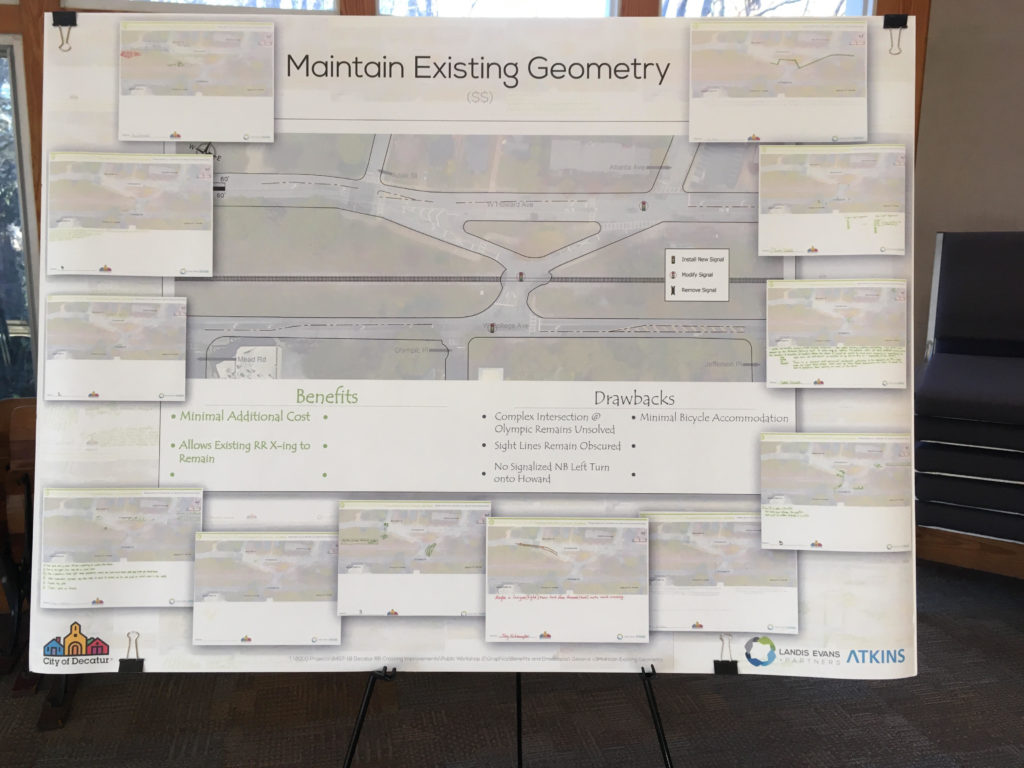