Decatur School Board discusses concerns about treatment of black students

Decatur School Board discusses concerns about treatment of black students 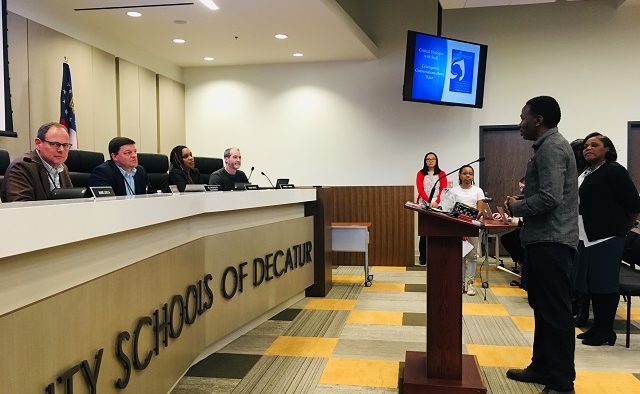 Fifth grade teacher Russell Stewart speaks to the Decatur School Board about the 4/5 Academy at Fifth Avenue. Photo by Sara Amis
Share

Inequity in the school system was again a focus of the City Schools of Decatur Board of Education meeting held on March 12, 2019.

At the February meeting, members of the Beacon Hill Black Alliance for Human Rights brought up two incidents involving Black History Month programs at Renfroe Middle School, one in which 7th graders were told they would not be able to attend a dancing and drumming program on campus, and another in which students were prevented from participating in a Culture of Caring service day.  Superintendent David Dude later issued an apology for his “defensive posture” at the February meeting.

Addressing Dr. Dude during public comment, Fanta Cowans said, “I can appreciate your attempt to self-reflect, however it’s clear to me that you still don’t get where this all began to go wrong.”

Cowans took issue with Dr. Dude’s assertion that the discussion among staff happened the way it should.

“This is well-meaning, that a permission slip or notification form is required to teach children about black history and culture during — of all times — February?  As far as I know, our children are not required or even asked to provide a signed notification form to learn white history or white culture,” Cowans said.

“We’re here. We have to be here,” said Mawuli Davis with the Beacon Hill Black Alliance for Human Rights. “This has to be addressed. We’re going to keep coming. We’re going to keep addressing it. Everybody here is engaged for the children. Don’t be upset about our presence and our advocacy. It feels like there’s this pushback, and there doesn’t need to be. The evidence is there, we all agree. We’re not going to just sit in a corner and wait.”

Davis added that the work is happening from the top down but that there are teachers and administrators in the schools “who are not champions.”

Board members thanked concerned parents for speaking out during the meeting.

“We do appreciate that you’re coming,” Board chair Lewis Jones said. “We want you to keep coming and holding us accountable. Sometimes people of good will can fail. It’s hard to change an organization. If it were easy, we’d have done it decades ago. To a person, we have embraced this need.”

School Board member Tasha White, who is black, said she understands the parents’ frustrations.

“I don’t want it to be forgotten that the issues that we’re bringing to the table are not new,” White said. “They’ve been happening in our lives and our parents’ lives and our grandparents’ lives for a really long time. And while we’re in the right space and getting onto the right path, we’re addressing it and talking about it, it gets very frustrating. It’s frustrating for everyone involved.”

Decaturish asked Dr. Dude if he could provide the results of the school system’s investigation into these incidents. Dude provided the following summary the school district’s findings and responses to the parents’ concerns:

Regarding the concerns about the dance performance:

The desire to host this performance was genuine and appropriate. It is an example of the type of event that is good for all students, and especially beneficial for students seeking positive examples of their culture in action.

The school erred when they used an old form as the starting point for this event, because that form required permission from parents and this event did not require such permission. Additionally, they failed to recognize and remove the permission language on the final form, despite email discussions articulating they clearly understood this was an event for all 7th Grade students and parental permission was not needed.

One of the four 7th Grade teams faced a conflict between their initiatives to improve responsibility and accountability in their students and the opportunity for students to attend this event. This specific team failed to isolate race as a discussion point when they met and decided that students without a returned slip would be prevented from attending the event. Some teachers on this team failed to recognize the role of race in their deliberation, including expressing a point of view that it was only a problem if Black students were kept from attending. This showed a lack of understanding that the event was valuable for students of all races, not just Black students.

Based on the above, I recommended that three individuals receive cultural humility training as soon as possible.

Regarding the concerns about Culture of Caring:

The planning and implementation of Culture of Caring events are complex and time consuming. Staff invest a great deal of time and energy into this program because they feel it is worth the effort for the impact it has on students. Because many of the activities involve volunteering at non-profit organizations — and those non-profit organizations sometimes run out of work for volunteers, especially for large groups and because many of the activities require volunteer chaperones and it is very difficult to get enough volunteers to chaperone–activities are often cancelled with very little notice. In these situations the staff determine alternative activities as quickly as possible.

Based on interviews with staff members, teachers met as a team to determine the location assignments for Culture of Caring placements. Teachers considered past behavior on field trips, the number and severity of formal and informal behavioral referrals and infractions, and the likelihood that students would behave appropriately on the field trip based on their social and emotional developmental level. While teachers acknowledged communicating to students at various times throughout the year that their behavior might prohibit their participation in school sponsored events, there was no specific guidance to students prior to selecting preferences for this event that their behavior would be reviewed to determine site assignments.

Based on the above, I recommended that staff involved with Culture of Caring should more clearly communicate to students and parents which activities could be cancelled due to variables outside their control; have appropriate backup-plans decided and communicated well in advance for any activities that could be cancelled with little notice; and, isolate race when discussing and deciding on potential activities. Additionally, if the school feels there are students that may not be able to appropriately handle attending an activity outside of the school, they need to develop criteria and rationale for such a decision, communicate those to parents and students, and develop an appropriate system for notifying students and parents of such a decision well in advance of the Culture of Caring day.

The school Spotlight portion of the School Board meeting focused on the 4/5 Academy at Fifth Avenue and its three-fold program to address inequity, based on “critical dialogue” among faculty, students, and parents. Faculty discussion has used the book “Courageous Conversations About Race” by Glenn Singleton as a starting point. Students participate in a Justice Board facilitated by Angelina Prophet which encourages them to articulate their own experiences as a step towards self-advocacy.

A parents’ group facilitated by Dr. Sean Warner of Clark Atlanta University has read “The Hate U Give” by Angie Thomas and discussed issues raised by the book.

“The school did an excellent job of soliciting parent involvement, made it very clear that the expectation was … that we would have to put ourselves in a place where we were not always going to be very comfortable,” said Christa Sobon, who has two daughters at Fifth Avenue.  “I’ve had the opportunity to learn a lot. I feel grateful to my parent peers who have been willing to put themselves out there and talk about this.”

Sarah Yoo, who has a daughter who attends F.AVE and a son who attends Winnona Park Elementary, described the parent discussion of “The Hate U Give” as “a very powerful experience because it gives us a fictional but very realistic context in which to ground our discussions.”

She added, “The common thread here is racism. Inequity is fueled by racism, individual racism, the collective racism in our community, and the systemic racism that lies in structures and policies. Being a part of this group has allowed me to see all of the ways that racism manifests itself. It’s not easy to see and talk about. It’s easier to hide and fear, but I’m grateful for our parent group is coming together and we’re starting to name it. Because only when we name it can we begin to work together to dismantle it.”

White praised the program saying that, “I remember growing up and talking about race issues at the dinner table with my family but it was never discussed at school, not at this level.”

In other business, the School Board voted to hire the Center for State and Local Finance at Georgia State University to conduct an analysis of property taxes and policies, including homestead exemptions, on school finances. The analysis should be completed by June 14, 2019.  The cost of the survey is estimated to be $40,000 and specifics of the contract will be negotiated by Dr. David Dude.

Lewis Jones brought up Senate Bill 53 in the Georgia legislature, which will require a separate vote for the expansion of the school system following any annexation by a city.

Jones said, “This is a response to the dispute between DeKalb County and the city of Atlanta which doesn’t really have anything to do with Decatur at all, but we’re getting caught in the middle.”