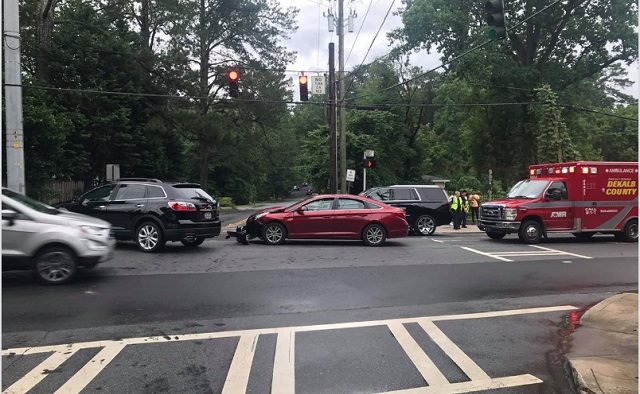 A photo of the June 18 crash. Photo provided by David Slagle
Share

It’s at least the second traffic accident at the intersection in two weeks. There have been dozens of accidents at that intersection over the years, and many residents are calling on the city to do something to improve safety there.

Police responded to the most recent crash around 6:55 p.m. Tuesday.

“The accident investigation revealed that a black 2012 Mazda CX-9 was traveling northbound on North Superior Avenue,” Police Lt. Jennifer Ross said. “A red 2016 Hyundai Sonata was traveling westbound on North Decatur Road when the driver failed to obey the traffic control device at the intersection of North Superior Avenue and struck the Mazda. The driver of the Hyundai sustained minor injuries and was transported to an area hospital for evaluation. Both vehicles sustained debilitating damage and were towed. The driver of the Hyundai was cited for failure to obey a traffic control device.”

“On Thursday, June 13, 2019 at approximately 12:47 p.m., Decatur Police responded to an accident involving three vehicles on North Decatur Road at North Superior Avenue,” Police Lt. Jennifer Ross said. “The accident investigation revealed that a red 2011 GMC Acadia traveling westbound on North Decatur Road crossed over the center line and struck the driver’s side front panel of a red 1998 Chevrolet Impala stopped eastbound in the inside lane at the intersection.  The impact spun the Chevrolet Impala around, causing it to strike a white 2001 Honda Accord that was stopped eastbound directly behind the Chevrolet. The drivers of the GMC Acadia and Chevrolet Impala sustained non-life threatening injuries and were transported to area hospitals. The driver of the Honda Accord did not report any injuries. The GMC Acadia and Chevrolet Impala sustained disabling damage and were towed. The Honda Accord sustained functional damage and was removed by the owner. The driver of the GMC Acadia was cited for failure to maintain lane.”

In a letter to the editor published last year, resident David Slagle wrote, “You don’t have to be an expert prognosticator to know that (another) tragedy is coming to this intersection.”

“City of Decatur leaders, when the tragedy happens, and it will, you will not be able to say that you did not know, or that the risk was acceptable, or that there was nothing that could have been done to prevent it. I think it will be reasonable then to blame you,” Slagle wrote.

Mayor Patti Garrett has said it could cost $1.5 million. Last year, she told Decaturish that the intersection is complicated because most of North Decatur Road is in unincorporated DeKalb County.