Since his announcement, the Atlanta Journal Constitution, Atlanta’s paper of record, hasn’t filed a single records request for more information about Clai Brown’s contract as city manager. Not one.

To recap, Brown’s contract in 2015 was amended to include a hefty severance for resigning. He could quit his job at any time for any reason and collect a salary plus accrued sick and vacation leave. When he announced his resignation in December 2017, he informed the city he was owed roughly $300,000.

It’s important to know the truth about this situation. Brown is running for mayor, asking for a position that will give him some say so in the city’s finances. Questions about his contract as city manager deserve answers.

When I recently informed an AJC editor that his paper hadn’t filed any records requests since Brown announced his candidacy, I received the following response: “Thanks for telling me how to do my job. I don’t know I managed to survive more than 35 years in journalism.”

As our readers know, Decaturish files records requests routinely to obtain information that informs our coverage. We filed several related to Brown’s contract after he announced his intention to run for mayor.

Our readers have a right to know the truth about what occurred with Brown’s contract and why.

Our reporting has revealed things that merit further exploration.

– The City Commission in 2018 threatened to fire Brown for cause before he settled his severance dispute with the city for $135,000, a fraction of what he claims he was owed.

– The contract amendment also allowed him to retire at age 55, a full 10 years earlier than any city employee.

– The city’s attorney conducted an investigation and determined that Brown allegedly hid the contract amendment from city officials elected after it was approved and from key city staff, including the former finance director and the city’s external auditors.

– The city also maintains that Brown’s severance was never properly approved in a public meeting. The severance isn’t mentioned in the minutes from the 2015 meeting where it was supposedly approved and wasn’t included in the agenda packet published before the meeting.

– Brown and his supporters have sent two letters attempting to quash questions about Brown’s contract. Brown’s attorney delivered a letter to Mayor Elmore’s house. The other letter, written by former Commissioner Lindsay Forlines, was sent to numerous residents. Forlines’ letter claimed Brown didn’t use city health insurance, a claim that is flatly disputed by city records and the city’s former finance director.

I note, again, that I have invited Brown to refute our reporting and participate in a recorded, sit-down interview that would be uploaded to Decaturish. If he can prove that we’ve gotten anything wrong, I will write a correction. To date, he hasn’t taken us up on our invitation.

To the best of my knowledge, the AJC hasn’t reported any of the things I’ve uncovered about this situation. I’m not pointing this out to pat myself on the back. I’m pointing it out because you don’t exactly have to be Bob Woodward to unearth any of this information.

The conclusions in our reporting are supported by public records and interviews with six people, not including mayor Elmore, who all support the city’s conclusions on this matter. Now, I suppose there’s a chance all six of these people are part of a grand conspiracy to see Elmore re-elected and are all telling the same lie. But keep in mind, this is Avondale. It’s not a town known for its sophisticated conspiracies.

Instead of questioning people that were there at the time, the AJC has largely taken Brown’s word for it. For example, in this article published by the AJC in 2019, the AJC wrote:

“It is an unusual contract,” Brown admitted recently. “But I didn’t come up with it and a city manager can’t approve his own contract. Every process, every bylaw was followed. The city attorney (Robert Wilson) signed it and it was approved by the BOMC at a city meeting. Matter of fact [Elmore] was in the room when the contract was voted on.”

What the AJC doesn’t mention is that at the time the contract was ostensibly approved, Elmore hadn’t been elected mayor yet. The AJC also apparently didn’t bother to contact city attorney Bob Wilson for a response. And what did Wilson tell us about where the idea for the contract originated?

“Around 2015, Mr. Brown asked me for a referral to an attorney for a personal matter dealing with a contract,” Wilson said. “I referred him to a Decatur attorney. A few weeks later, Mr. Brown presented me with a proposed amendment to his employment contract prepared by that attorney. It was not drafted by me or anyone at our firm. I was never asked to perform any analysis of the amendment such as whether it would be enforceable against a future [City Commission] or whether it was a good idea for the city to agree to the amendment. I did approve the amendment as to form.”

That sounds like an important detail, doesn’t it? If you were expecting the AJC to follow up on that, you’d be wrong. They haven’t.

Oddly enough, the AJC’s reporting on this story appears to contradict its earlier reporting. After Brown threatened to resign and then decided to stay before settling the severance dispute, the AJC reported that Elmore and Commissioners Brian Fisher and Adela Yelton didn’t know about the contract amendment until Brown announced his resignation. It’s funny how things that the AJC previously reported on this situation haven’t made it into the recent articles about the mayoral race. Did the AJC ultimately conclude this information wasn’t correct? If so, the AJC should enlighten us as to what they uncovered. The voters deserve to know the truth.

As you can see, the AJC hasn’t delved too deeply into any of this. The only consistent theme of its reporting on the Avondale Mayoral race is a troubling lack of curiosity.

In full disclosure, I have been quietly complaining about this to the AJC for months with no success. It bothers me because Brown’s supporters have been gas lighting our readers in Avondale by labeling my stories as false without providing any evidence to refute them. Here’s one example. 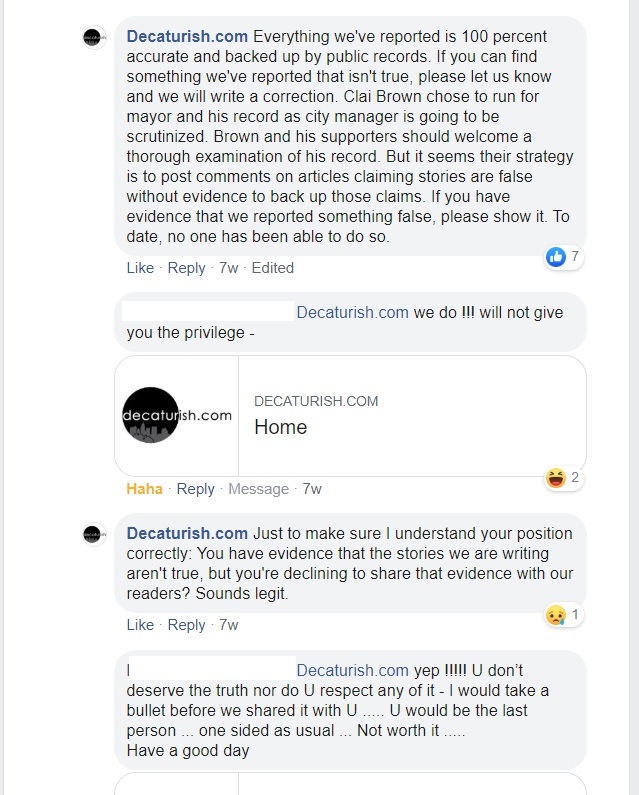 So just to recap: Clai Brown’s supporters have evidence that they say will refute our reporting on this topic. But they won’t give it to us because we don’t deserve it. How convenient.

While we wait for the denouement that will reveal earth-shattering truths and force us to retract everything we’ve written, I thought I’d share the latest AJC article on the mayoral race. When I saw the new byline, I was hopeful that the AJC had finally decided to dig into these questions. Better late than never, right? Then I saw this paragraph.

The severance saga is so complex that Brown and Elmore don’t agree on many of the details. For example, the mayor said he didn’t know about the provision in Brown’s contract, since it was negotiated before he came into office. Brown maintains that the mayor and commissioners at the time agreed to the contract, which was public, and Elmore voted to renew it after he became mayor.

And that bit of journalistic hand-waving is the AJC’s most recent take on the matter. Don’t expect the AJC to try and get to the bottom of this. It’s too complex, you see.

When I asked this story’s editor about the AJC’s reluctance to ask more questions, he said, “We wrote this story for all of our readers in metro Atlanta, not just for the residents in Avondale Estates. This is a very complicated episode and it is our job to make all points of view accessible to our readers, especially for a political story from a town with about 3,000 residents.”

So, the AJC doesn’t do complicated now? That’s interesting. Because I thought untangling complex issues was the entire point of journalism.

To be fair, the AJC does routinely tackle complex topics. Take, for example, its recent story about the city of Atlanta paying $24,500 in healthcare costs for former Atlanta mayor Kasim Reed. It’s deeply reported and relies on public records.

I’m from Alabama and math isn’t my strong suit, but I do believe $300,000 is much more than $24,500. So why is one city’s $24,500 expense more worthy of a deep dive investigation than another city’s $300,000 severance clause? What makes Avondale Estates less worthy of this kind of inquiry?

I don’t expect we will receive an answer. Instead of justifying its reporting in any meaningful way, the AJC’s editor has responded with indignation and condescension. When it comes to exploring one of the most crucial issues facing Avondale voters, the AJC simply can’t be bothered.

I’m not telling you this to make myself look good at the expense of the AJC, which on the whole is a decent paper with talented reporters.

I’m telling you this so you know the truth about the AJC’s reporting on the Avondale mayoral race. It isn’t that the AJC looked into any of this and decided there was nothing to it. It’s that the AJC apparently didn’t look into it. At all. And, like the truth about Clai Brown’s contract, that’s something voters in Avondale deserve to know.