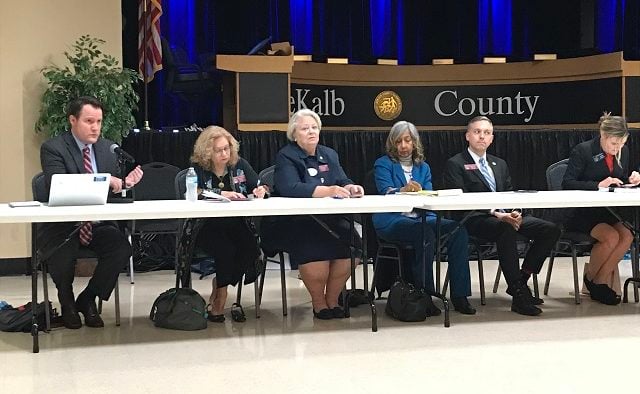 Annexation and education were among the topics addressed last night, Oct. 15, when 100 citizens filed into the DeKalb County delegation’s third Town Hall – a meeting that almost didn’t happen.

Rep. Karla Drenner (D-Avondale Estates) opened the meeting, explaining the delegation’s original intent was to hold “a traditional town hall meeting with some information on the (ethics) referendum.”

However, after a lively Town Hall in Tucker on Oct. 1, State Sen. Emanuel Jones (D-Decatur) sent a vague email “rescheduling” the remaining two meetings. His email stated: “Due to the Governor’s proposed budget cuts and layoffs, the Delegation leadership feels that these new developments are paramount and should be priority at this time.”

Sen. Jones is one sponsor of Senate Bill 7, legislation that called for a controversial ethics referendum on the ballot Nov. 5.

Rep. Matthew Wilson (D-Brookhaven) came forward to say the meetings would go on as scheduled.

“There are no power point presentations,” Rep. Drenner said, referring to Sen. Jones’ lengthy talk at Cofer Library in Tucker.

Rep. Drenner invited citizens to the podium to first discuss topics other than the referendum.

Martha Gross, a citizen from North Druid Hills, proposed a survey for cities and communities affected by potential annexation. “Nobody has asked us what we want,” she said of her civic association.

Dr. LaDena Bolton asked about the implications of Senate Bill 362, which allows local school systems to choose an alternative to Georgia Milestone testing.

“My concern is that quite a few educators, and even some representatives I spoke with, weren’t familiar with this bill at all,” Bolton said. “They couldn’t say how the schools were selected and why it seems most of the schools selected were only the high performing schools.”

Renee Lindsey, another attendee, stated her disappointment that “no elected officials” were present at the trial of Anthony Hill, a black veteran shot and killed by white police officer Robert “Chip” Olsen. Olsen was recently found not guilty on felony murder charges, but guilty on other charges.

“Anthony Hill was murdered by a cop and they just had a trial,” Lindsey said. “We didn’t see … elected officials there supporting the family, talking about he was a veteran. I would like to see our elected officials talk about what they’re going to do about police brutality, what they’re going to do about hate crimes on the rise. Nobody’s talking about that. You act like it don’t exist. But it’s very important.”

Representatives addressed the audience, citing legislation and plans for follow up next session.

But top of mind was the ethics referendum that stands to change how DeKalb County Board of Ethics members are appointed.

In November 2015, voters passed a referendum to appoint seven members to an ethics committee. Former commissioner Sharon Barnes Sutton filed a lawsuit to stop private groups, such as Leadership DeKalb, from appointing members to the ethics committee. A judge agreed with her and the decision was upheld in Georgia Supreme Court in August 2018.

Mary Hinkel, chair of the Dekalb Citizens Advocacy Council, asked, “Why was the decision made to make substantial changes? All – and I say ‘all’ lightly – all you had to do was fix the appointment process as required by the Georgia Supreme Court.”

Pat Killingsworth, former member of the Dekalb County Board of Ethics from 2000-2009, said the legislation in 2015 that was approved by 92 percent of voters made it possible for the board of ethics to officially, effectively function.

“It seems that the primary purpose (of Senate Bill 7) was to downgrade the authority of the ethics office and to remove the current ethics officer from her position,” Killingsworth said.

She added, “In the current law, right now there is a method to remove an ethics officer for cause. It can be done. Right now! But nobody has taken the time to do that. No one has filed a complaint even though CEO Thurmond has made a statement that he thinks that the current ethics officer has overreached.”

Killingsworth asked the delegation to “pass what needs to be passed in order to get our Board of Ethics up and running again.”

State Sen. Elena Parent followed with, “The legislative process at the Capitol is chaotic and not very transparent. I do want to tell you that while I dislike the process this bill went through greatly, it is not an uncommon way for business to be done at the Capitol.

“There are many aspects of this bill that I don’t like,” she continued. “I don’t like the provision where employees have to exhaust all human resources options regarding their direct supervisor before they can approach the Ethics Office. I like having a highly credentialed Ethics officer and don’t like the provisions that make that position less authoritative and more administrative.”

Other citizens wondered what will happen if the referendum does not pass on Nov. 5.

Rep. Doreen Carter (D-Lithonia) was not encouraging a vote in either direction.

“You have policy and you have politics. Unfortunately, the politics have found its way into this bill,” Carter said. “On Nov. 5, you get to vote. You can vote yes, you can vote no. And we’re going to be good either way. We have done our job. We presented some legislation. It’s going to be on the ballot. If you say no, then we go back to the drawing board. If you say yes, we still go to the drawing board and do some amendments. I’m not going to tell you which way to vote. I’m going to encourage you to read the bill for yourself and then you make a decision for yourself.”

The next Town Hall meeting is Monday, Oct. 21 at Brookhaven City Hall.