Superintendent David Dude also answered questions about why the two top central office staffers left in December, but some of the circumstances are still unclear. It appears that the timing of their departures is coincidental, based on interviews and reviews of public records.

The School District hired the firm Ed Planners for $27,500 a month to handle work in both the finance and human resources departments, Dude said. The School Board didn’t vote on the contract because the superintendent may execute contracts up to $100,000 without board approval, Dude said.

“The initial term is for three months, although we can shorten or lengthen that if needed,” Dude said. “We are hoping we will only need their services for a month or two but appreciate knowing they are available if we need them longer.”

Prior to Adams departure, the school district’s attorneys investigated employee complaints about him. Adams said his resignation was unrelated to this investigation and Dude deferred on that question, saying, “I can’t speak to his motivations for his resignation.”

Decaturish spoke to people interviewed by the school district’s attorneys. They said the questions from the attorneys pertained to Adams specifically and not Hurst. The precise nature of the complaints about Adams is unknown.

“I can characterize it as, there were some employees who felt like they weren’t being supported as well as they should’ve been supported in their interactions [with David Adams],” Dude said.

Ordinarily, a complaint about an employee would be investigated by Adams, but since Adams was the target of the complaint, Dude turned it over to the school district’s attorneys. There were no specific complaints in Adams’ personnel file when Decaturish reviewed it following an open records request.

Adams said he had been thinking about resigning for some time. He said his decision was unrelated to Hurst’s decision to leave.

“There are many factors that were considered by myself over a continuum of time as I arrived at my decision, and those that are close to me will tell you that I have contemplated this and other life decisions for over a year,” Adams said. “In the past, the Superintendent has been aware whenever I have pursued other opportunities for myself and he has always been supportive of me, as well as others when such opportunities greatly benefit staff members and their families.”

Adams said he is “proud of my work and accomplishments” while working for CSD.

“During my time with CSD I have successfully worked to improve the efficiency and effectiveness of the staff support area, to offer prudent guidance, and to follow up on commitments made,” he said. “Under my leadership, and with the assistance of a very capable staff, the employees, staff members and principals of CSD have become accustomed to a level of customer service from my area that has steadily improved.”

Hurst did not respond to numerous messages seeking comment. There is no evidence that she was under investigation prior to her departure. Like Adams, Hurst’s personnel file doesn’t contain any formal complaints about her performance or conduct or any reprimands. She joined CSD in 2012, a few years before the School Board hired Dude. In her resignation letter to Dude, obtained via an open records request, Hurst defended her record, noting that in fiscal years 2018 and 2019 the school district’s audits had no findings.

“My end of the year evaluations have always been at least satisfactory or better,” Hurst wrote.

Dude declined to say whether they had been complaints about Hurst and indicated that her departure wasn’t because of performance.

“It’s not even necessarily that a certain leader is doing something wrong, it’s that we don’t feel a synergy in the direction we’re going,” Dude said. “It may be from me. It may be from the leader. What’s important in leadership roles is that the leaders have a synergy and are going in the same direction. When that isn’t the case, that can be a time for parting ways.”

Records obtained by Decaturish show Dude was aware that people might assume the timing of Hurst’s and Adams’ resignations were related. The district distributed a list of talking points to CSD staff about the situation and the list included a note that the timing was “coincidental.” 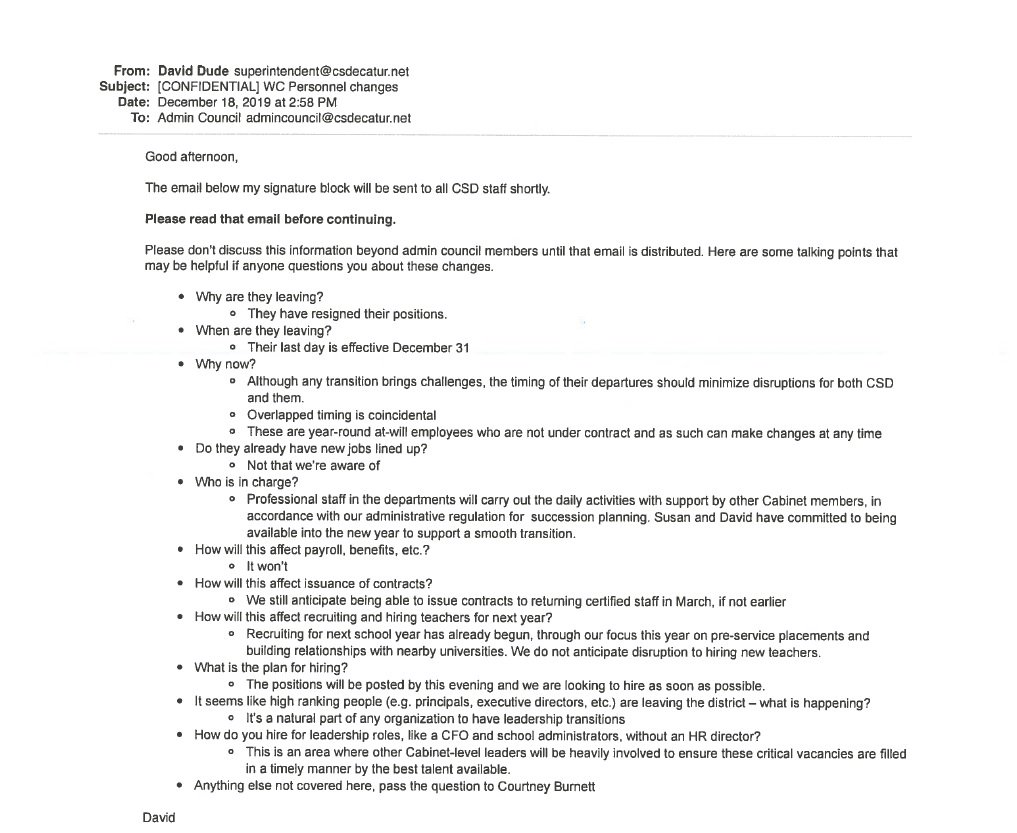 Dude said he anticipated that people would think the resignations were somehow related and he understands why. But they aren’t related, he said.

“It was time for new ideas and new leadership,” Dude said.