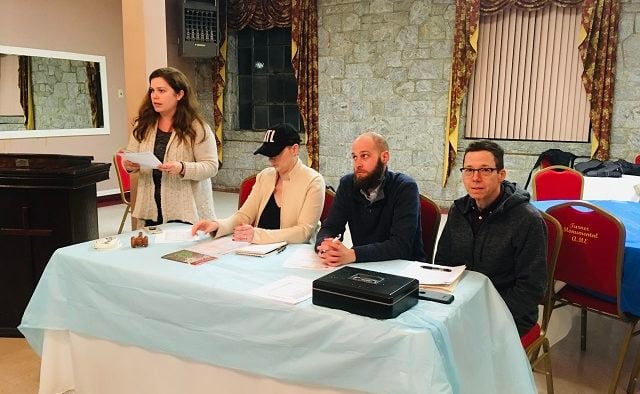 Atlanta, GA – The Kirkwood Neighbors’ Organization meeting on Feb. 10 opened with a moment of silence for Carl Newman, the Atlanta Department of Watershed Management employee who died in a Feb. 2 accident in Kirkwood.

During the meeting, Atlanta City Councilmember Natalyn Archibong and State Rep. Bee Nguyen announced that they will hold a joint town hall on Feb. 19 from 6:30 p.m. to 8:30 p.m. at the Coan Park Recreation Center, located at 1530 Woodbine Ave SE in Atlanta.

“The shooting happened while children were outside playing on the playground,” said Kissel.

Archibong provided some additional information about the incident.

“According to the zone commander, things moved so fast that there was not time to lock down the school,” said Archibong, adding “The APD has a no-chase policy. I don’t think the state patrol does.”

Kissel said that the incident put other people in danger.

“That’s the concern, I think, that the state patrol doesn’t have any rein on their ability to chase into neighborhoods,” Kissel said. “That person died. He’s not going to get a trial, and our lives were put in danger for a stolen vehicle.”

Rep. Nguyen said that the national recommendation was for officers to never shoot into a vehicle, as well as for no-chase policies.

“I will reach out to the state patrol about that,” said Nguyen.

– Nguyen gave an update on budget discussions in the state Legislature.

“The problem is that we are not generating enough revenue in our state, and there’s a huge hole in our budget,” said Nguyen. “You’re going to hear that some of [Gov. Kemp’s proposed cuts] are not vital, but the reality is that we are going to see less meat inspections, less food inspections and that impacts everybody. They’re cutting funding for infectious diseases which affects everybody. We’re also going to see cuts to agencies that deal with behavioral and mental health.”

Nguyen added that she had heard testimony that funding cuts would result in increased suicides and homelessness.

“I don’t know how many of you remember, over the summer there were bicyclists involved in a hit and run, that was my wife and I,” said Warren. “It was a pretty scary thing, it was a life-threatening thing, and I feel strongly that our infrastructure is a big part of the problem why it’s unsafe to ride a bicycle or walk as a pedestrian or try to get transit in our neighborhood, and I want to change that.”

Warren requested approval to write a letter in opposition to a GDOT plan for a street crossing at Arkwright and Moreland Avenue which would remove a stoplight and require pedestrians and bicyclists to go 200 feet out of the way to cross. He plans to encourage other neighborhood organizations to write letters of opposition as well.

Warren has requested that MARTA install new benches at bus stops that qualify for them and plans to pay for an additional bench out of the committee’s budget.

– Julie Straw, who has spearheaded a project to refurbish the Coan Music Park, also requested approval for a letter to the Office of Cultural Affairs so that the existing art installation can be refurbished in part and replaced. Bond Anderson will be helping to restore musical instruments at the park, while a mural and railing which are also part of the installation will be replaced. Straw says that the plan is to make the play space more accessible as well.