“Turn the lights off, I have left the plantation,” Jones said.

Prior to his resignation, Jones, a Democrat who is part of the DeKalb County Legislative Delegation, announced he was endorsing President Donald Trump.

He was condemned by other members of the party. He was also facing a challenge to his residency. Faye Coffield, who lives in the district, has filed a complaint with the Georgia Secretary of State alleging that Jones has used numerous addresses but doesn’t actually reside in the district, as required by the law.

Jones denied the allegation in a statement to the Atlanta Journal Constitution, calling it “baseless and without merit.”

Jones’ resignation means that business owner Rhonda Taylor, who was challenging Jones in the June 9 Democratic primary, will likely be the new state rep for House District 91, which includes Lithonia.

It’s likely not the end of Jones’ political career. Jones served as DeKalb County CEO for two terms starting in 2001. Prior to that, he served eight years in the Georgia House of Representatives.

He ran unsuccessfully for sheriff in 2014.

Here is Jones’ full statement about his resignation: 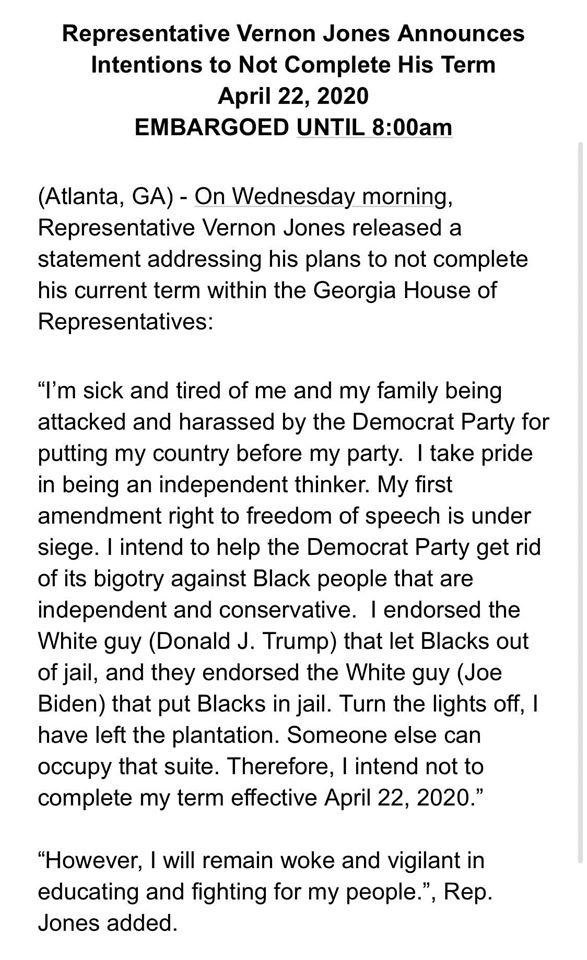